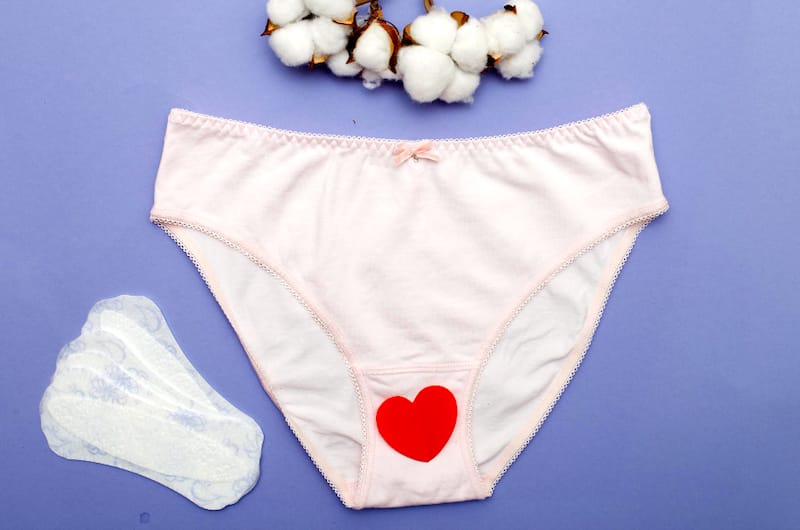 A panty liner is a thin yet absorbent material that women often wear under their underwear.

It’s normal for a woman to wear a panty liner to avoid changing their underwear many times a day. Instead, they only discard the liner and put on a new one.

But sometimes, the discharge may prove troublesome. For example, have you had to wear several panty liners a day for several days or weeks?

If you have to wear a panty liner, it should be at least three times a day for a few days. But when this continues for days, it becomes suspicious, and you may wonder if it is normal to wear panty liners daily.

So, what makes you wear panty liners every day?

You might be experiencing excess vaginal discharge that requires panty liners daily for the following reasons.

1. You could be ovulating

When estrogen levels rise during ovulation, it triggers the production of cervical fluids.

These fluids flow through the cervix to the vagina and eventually come out. Therefore, you will experience more vaginal fluid during ovulation than on non-ovulating days.

During this time, you may need to wear panty liners to avoid messing yourself up, especially if you have a busy working routine.

After that, ovulation will last for a short time, and then the excess fluids stop, and you are good to go.

The fluid during this period appears clear and slippery to touch. It symbolizes that you have a high fertility rate during this time.

2. After the end of your menstruation

Menses will require that your wear a tampon or sanitary pads. The period lasts up to four to five days and finally subsides. However, after menstruation, you might still be experiencing some vaginal discharge.

The thick mucus discharge after menstruation might get accompanied by the remaining after-menses fluids, which help clear out any remaining menses.

When a woman’s body gets aroused, several reactions take place. First, the blood flows into the female genitalia increases.

When this happens, the enlarged blood vessels push the cervical fluids to the vaginal walls. The fluids help lubricate the vagina, making it ready for sexual intercourse.

If you get aroused often, these fluids may come out, and you need to wear a panty liner. This process becomes necessary if the environment doesn’t permit sexual interactions.

You may also experience the following symptoms upon arousal:

You are aroused if you experience these symptoms followed by excess vaginal fluid. However, to avoid using panty liners, you may try to avoid the person responsible for the arousal if the environment doesn’t permit sexual intimacy.

I have had to wear panty liners following a sexual act if I had pressing matters requiring my attention.

After sexual intercourse, the arousal fluids coupled with seminal fluid may get trapped in the female vaginal tract. Then, after relaxing, they start coming out.

The occurrence may prove uncomfortable and may call for the need to wear a panty liner. However, once the discharge comes out, you will not need a panty liner daily.

5. It could be bacterial vaginosis

Bacterial vaginosis refers to the overgrowth of vaginal bacteria. Most women suffer from this condition, which might be why you must wear a panty liner daily.

Although the bacteria doesn’t qualify as a sexually transmitted infection, most women catch it after sexual intercourse.

You will experience milky to gray-colored discharge in the case of bacterial vaginosis. The odor of the discharge doesn’t feel normal.

You’ll need treatment to eradicate the bacteria and end the struggle of using panty liners daily.

Other symptoms may include:

When the Candida fungus, causes yeast infection to multiply, you may have excessive vaginal discharge. The discharge gets accompanied by intense vulva and vaginal itchiness.

The discharge will be odorless and thick whitish.

Over-the-counter antifungal medication helps treat yeast infections. However, you will need to visit your doctor for a diagnosis.

The burning and itching sensation may be due to Trichomoniasis.

It spreads through sexual intercourse with someone having the Trichomoniasis parasite. This parasitic STD often affects pregnant women.

It also comes with excess vaginal discharge with a fishy odor. It might be thinner and whitish, greenish or yellow.

Should you wear panty liners every day?

No, unless you have excess discharge prompting you to wear them.

Do panty liners make you smell?

You may smell if your vaginal discharge has an odor, and keep the panty liner for a long time.

How can I stop daily discharge?

You can stop daily discharge by visiting your doctor and getting a diagnosis for the cause of the excess discharge. Then, treating the cause will prevent the excess vaginal discharge.

Can you sleep with a panty liner?

Yes, you may if you don’t need the excess vaginal discharge messing you up.

Do panty liners cause UTIs?

If the discharge containing bacteria finds its way up the urethra after wearing panty liners, you may develop a UTI. But the panty liners don’t cause UTIs on their own.

If you experience excess vaginal fluid, it might be normal or due to an underlying health condition.

To rule out the cause, you need to visit the doctor if you experience accompanying uncomfortable symptoms.

You should see a doctor if the discharge has white, yellow, green, or other weird colors.

Treating the underlying cause stops excess discharge production; hence, there is no need to wear panty liners daily.