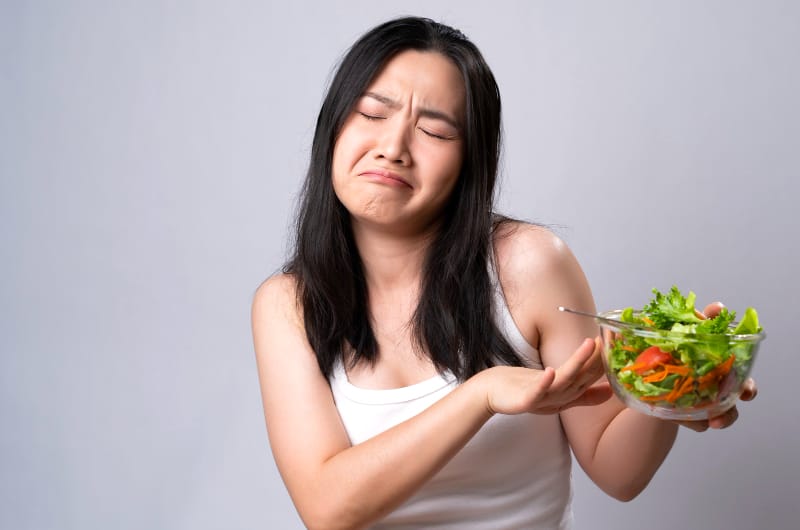 Experiencing a feeling of fullness after having a few bites of your meals, even though you’re hungry, could indicate early satiety. If it keeps on repeating, this can deteriorate your health in terms of unexpected weight loss and muscles and can even create a nutrient deficiency in the body. Gastroparesis is a common cause, but other common culprits influencing include peptic ulcer, IBS, GERD, constipation, stomach cancer, etc. Treatment depends on the cause, but the doctor usually recommends taking care of the diet by eating frequent and smaller meals, reducing fat and fiber, consuming liquid food, or taking appetite stimulants. Refer to a doctor or nutritionist for expert advice.

Has it ever happened to you? It’s lunchtime, and you’re pretty hungry, and your know you can eat a full meal.

But as you begin eating, you suddenly find yourself full after maybe 7 or 8 bites. You know you’re hungry but feel full suddenly, and you can never finish any of your meals.

If you’ve been doing this a lot lately, you’re probably suffering from something known as early satiety.

Another common symptom is a feeling of nausea and a need to vomit while eating your meals.

Early satiety is easily treatable, and let’s see how!

It’s a feeling of fullness after a few bites of your food or before finishing a normal-sized meal.

A regular meal might differ depending on age, sex, genes, height, and weight of a person, and it might also change depending on how many meals you’ve had before or what you usually consume.

But if you’re not able to finish what you consider an average meal for yourself, and it’s been happening quite often, you might have this health issue.

The biggest symptom is this early feeling of fullness, and others might depend on the cause behind this health issue which is causing you to eat so little.

This illusion of fullness can be created by the following health issues:

It’s a disorder where the stomach takes too long to empty food, and it can cause various symptoms such as nausea, vomiting, and feeling early fullness.

This slow emptying of the stomach is also known as gastric emptying.

There’s no sure cause of gastroparesis, but it’s something to do with disrupted nerve signals in the stomach. When these nerves become disrupted, the food moves too slowly.

According to the National Institutes of Health, the common health issue causing gastroparesis is diabetes, but it can also be caused by:

If gastroparesis is the cause of early satiety, you might also experience other symptoms such as bloating, nausea, heartburn, upper abdominal pain, or unintended weight loss.

A peptic ulcer is created when stomach acid eats away a part of your small intestine or stomach lining.

It can interfere with your normal digestion and comes and goes over the years if not treated properly.

There’re several signs one can see to recognize this issue, such as fatigue, weakness, upper abdominal pain, back pain, pain while sleeping, indigestion, or heartburn.

If you witness these symptoms and early fullness, you might want to get yourself checked before your ulcer turns into a medical emergency.

IBS is another popular cause of early satiety.

Cancer can be caught in an early stage, but to do that, one needs to pay attention to the early signs and symptoms.

Early satiety is one such sign of stomach cancer where patients experience a feeling of fullness in their upper abdomen after eating only a small amount of their meal.

Other possible causes of early satiety

We’ve discussed the more prominent and common causes, but there could be other possible health issues causing early satiety.

These could result in other possible symptoms such as:

How can early satiety be bad for your health?

When you’re going through recurring episodes of eating so little and becoming easily full, it can eventually lead to a nutrient deficiency in your body.

Your body isn’t getting its required daily calories and nutrients, resulting in unexpected weight loss and muscle loss.

You’ll feel tired easily with muscle loss, and everyday tasks will seem like a burden. With not enough calories, you’ll be low on energy, and it can also lead to brain fog and disrupt brain activities.

These can create multiple health issues in your body. It becomes vital to recognize the cause and treat it to remove this problem.

Treatment depends on the cause, which might differ. Significant signs can help diagnose the cause.

Your doctor might even perform various tests to determine the cause and refer you to suitable treatment.

There will be a focus on your meals and how to make sure you’re eating enough required for your body.

The following tips can help:

If the issues become severe, your doctor might refer to different procedures and recommend one suited to your current condition.

When should I worry about early satiety?

Early satiety can seem like a minor problem, so most people ignore it until things get worse.

The warning signs are there from the beginning, which turns into a medical emergency when ignored.

These warning signs include vomiting with or without blood, black or tarry stools, abdominal pain, chills, and fever. You should immediately seek medical help.

Does anxiety cause early satiety?

Appetite is never a primary symptom of anxiety, and someone with anxiety might not even realize a change in their appetite. Those around might notice overeating or not eating at all.

Reduced hunger could be because the stomach retains excess acids, creating a sensation of fullness for longer.

Serotonin also plays a factor in the feeling of hunger, and those with anxiety have lesser of this hormone.

It could also result from several mental factors, as people with anxiety might have too much on their minds to think about eating. Or when their body tells them, they’re hungry and don’t eat.

What foods can increase satiety?

Those suffering from early satiety are recommended various treatments depending on the cause.

Mostly, they’re told what, when, and how much to eat to improve their diet to have nutritious meals.

A satiety index ranks foods according to their ability to satisfy hunger. Eating these foods ranking higher can keep you full for long.

What should I eat when I have no appetite?

There could be days when we don’t feel particularly hungry, but eating nutrient-filled food is necessary for our body.

When you don’t have an appetite try to eat smaller but frequent meals. You could also focus more on healthy smoothies and soups.

If you’ve had a low appetite these days, you can try these ways to get back on track:

– Small and frequent meals
– Nutrient-rich foods
– Adding more healthy calories to food
– Make it enjoyable by doing what you like
– Change your dish, serving size, or where you eat
– Keep your mealtime fixed even if you eat little
– Healthy snacks
– Flavor your food more
– Start exercising

Also, watch out for early satiety if you’ve been experiencing a loss of appetite and feeling full after a few bites of a meal even though you’re hungry.

There could be other signs, too, so get yourself examined.

What’re the signs of not eating enough?

If you’re experiencing a loss of appetite coupled with feeling full easily when taking a few bites of your food, you could be suffering from early satiety.

There could be other warning signs, and it’s best to recognize them early to start your treatment.

Early satiety can not seem like a problem at first, and people can often confuse it with an expected loss of appetite.

However, it starts getting serious when it keeps on happening, and there are other warning signs such as unexpected weight loss, shortness of breath, and so on.

Various health issues could trigger early satiety, so the treatment for this early feeling of fullness could be different.

But generally, doctors recommend taking care of your diet by following a couple of simple things or referring to a nutritionist.