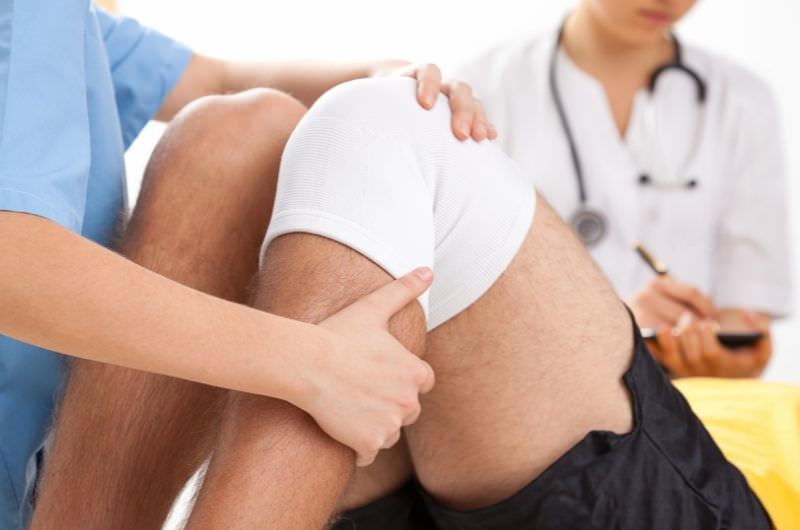 Arthroscopic knee surgery may likely cause bruises on your thigh. Several aspects may cause the bruises, some simple and easy to disappear and others complicated and requiring specialized medical attention. For example, the bruising could be from the tourniquet, a deep vein thrombosis, an infection, nerve damage, attached fixation devices, femoral fracture, or one of the other many rare complications. Although most of these causes may be treatable, some will have to be managed with medical and personal care.

Most people will undergo knee arthroscopy at one point in their lives.

Old age complications, injuries from sporting activities, and underlying medical conditions such as arthritis are some of the several causes of knee complications that may necessitate an arthroscopic knee surgery.

Persistent knee pains, stiffness, and swelling may be the tell-tale signs that you need a date with your orthopedic surgeon. In most cases, scans may not disclose the cause of your problem, which may range from injury in the meniscus of the knee to possible injuries in the articular cartilage of the knee.

What does arthroscopic knee surgery do?

Arthroscopic knee surgery involves a procedure in your knee that aims to find problems inside the knee and fix them without opening the knee up.

Instead, the doctor uses a lighted tube mounted with a camera referred to as an arthroscope. Some surgical tools also help make small incisions on the knee to help identify the problem and provide corrective measures.

The physical handling of the incision area may cause bruises to your thigh. The red or blue marks on your thigh will often result from bruising. Not only do these bruises signify some normal bruising, but they may also indicate other post-operative complications of Arthroscopic knee surgery.

The bruising may be simple and easy to treat, yet some can be pretty alarming in the extreme and may require immediate medical attention.

Your bruise marks may signify other medical-related issues that may be termed as post-surgery effects. In this article, we discuss some of the conditions associated with thigh bruising after arthroscopic knee surgery. Some may need immediate medical help, while others disappear on their own as you recover.

This device has a round pneumatic cuff that ties around your upper thigh. It has a design that allows air to pass through at high pressure while controlled through a programmable pump.

This device helps prevent excessive bleeding by pressing on the deep veins and arteries that bring blood to the knee. Compressing these major blood vessels prevents bleeding, so the doctor gets an excellent internal view of the knee.

While a tourniquet helps keep the blood circulation controlled, it may bruise the thigh through its compression. This way, you may notice some bruises after the surgery due to using a tourniquet during the knee surgery.

One study on knee surgery and related research looked at the effects of a tourniquet on patients who have the device used on them. It was noted by the survey that the bruising and pain were more when using a tourniquet than when not using it.

So, it could be that your bruising was caused by tourniquet use during the surgery. The smaller blood vessels beneath the tourniquet cuff that the doctor might have strapped around may rupture, causing bleeding.

The bleeding may later manifest in visible bruising. The bleeding is likely to occur when the patient has conditions that make the underlying smaller blood vessels unable to bear such intense pressure.

Bruising from the tourniquet typically disappears after a considerable duration and may not essentially necessitate a need for either alarm or immediate medical attention.

Our blood appears structured to automatically form clots on open injuries to prevent blood loss and initiate the healing process.

Sometimes the coagulant responsible for such a function offsets the formation of a blood clot within the blood vessels even without evidence of an open injury.

Such a malfunction might be fatal and dangerous to anyone not to forget anyone who recently had arthroscopic knee surgery.

Medicines, anesthetics, and physical alterations used on any of your knees during arthroscopic knee surgery may promote the likelihood of suffering a deep vein thrombosis on the same knee or other parts of your leg, such as the thigh.

The same may also happen by chance out of other underlying health conditions.

Nonetheless, when a deep vein thrombosis hits, it may hit hard, and in its wake comes swelling, untold pain, and a possibility of bruising on and around the recently operated knee.

Considering anyone who might have undergone arthroscopic knee surgery recently, a DVT calls for immediate medical attention to alleviate the swelling, pain, and subsequent bruising.

Another probable cause of bruising after arthroscopic knee surgery is when you run into infection after the surgical procedure.

Your knee might have accidentally got exposed to such an infection during or after the surgical procedure. It is common knowledge that openings in our skin are the main entry points of disease infections into our bodies.

The incisions may establish such entry on the knee during or after arthroscopic knee surgery.

Such infection may also be referred to as septic arthritis. The disease infections may also be caused by other underlying conditions in our bodies, such as gonorrhea and other urinal tract infections.

A recently arthroscopic operated knee may present a platform for such diseases to manifest.

When such happens, it becomes possible to experience pain, swelling, and evident subsequent bruises on areas on or around the knee, such as the thigh above it.

The type and intensity of any infection after arthroscopic knee surgery may, in most cases, dictate the urgency and seriousness it might be accorded.

Even so, regular usage of prescribed dosages of antibiotics, either ingested or injected, comes in handy in combating almost all infections after arthroscopic knee surgery.

Like every other part of the body, the knee may be a hub for countless nerve endings and receptors.

During arthroscopic knee surgery, many of these nerve fibers and nerve endings may be disrupted physically and medically by the anesthetic used. Possibly a nerve may be damaged during the procedure or even during healing.

Nerves happen to structurally sense stimuli such as pain, heat, and excessive pressure and control body parts functioning. In the event they get damaged, such vital senses are non-functional.

Subsequently, any harm can befall your knee or thigh without your noticing it, and before you realize it, you have several bruises to match.

Sometimes the patient undergoing arthroscopic knee surgery might have undergone surgical procedures in the past that had necessitated the usage of fixation devices.

Before you wonder what fixation devices are, they come in the form of devices such as cross pins and tunnel screws, among others. Their primary function happens to be to enforce the mechanical process of the human anatomy, such as bones and ligaments.

Such fixation devices may have been previously grafted either on the knee or thigh of the person having the arthroscopic knee surgery.

The mechanical operation on the knee, not to forget the pressure exerted on both knee and thigh by the tourniquet, may offset the positioning or functionality of such fixation devices, if any.

When such happens, the subsequent damage may be represented in pain, swelling, and possible bruising on both knee and thigh, which might end up requiring more corrective surgical procedures.

The knee joint joins the thigh bone known as the femur with the lower leg bones, tibia, and fibula.

However, the joint connects structurally becomes very important in balancing the weight borne by each of the bones. Together with ligaments and tendons from both sides, the knee joint maintains the weight balance to ensure none of the bones succumbs to impact or fractures.

During arthroscopic knee surgery, the adjoining ligaments, tendons, and the entire knee joint may be tempered with offsetting the crucial balance.

When combined with subsequent weakness on the knee after the arthroscopic knee surgery and several possibly damaged nerves, such damage might easily lead to a femoral fracture.

Given that the femur lies underneath the thigh, it is unlikely for the latter to survive a devastating femoral fracture without several bruises.

There happens to be a string of several other possible yet rare complications that could affect you after arthroscopic knee surgery that may cause bruises on your thigh after the surgical procedure.

Though sparsely reported and recorded, the complication may be as evident as they are also real.

Myositis ossificans, which cause bone tissue to form inside muscle tissue due to trauma, may set in after arthroscopic knee surgery.

Pigmented villonodular synovitis, a disease affecting tissues lining joints and tendons to form a non-cancerous tumor, may set in after knee surgery.

To mention but a few, the said complications may bring in their conspicuous wake bruises after arthroscopic knee surgery.

It may be very typical to experience bruising after arthroscopic knee surgery.

The bruising may be due to the pressure from the tourniquet, which reduces bleeding by applying pressure on the larger underlying blood vessels. The bruising might also come from some other complications related to the surgical procedure.

How long can bruising last after surgery?

If the bruising happens on a minor scale and does not portend a significant underlying complication, it may not last long and may fade off within a short time.

A good example may be the bruising from the tourniquet. On the other extreme, some other bruises from more severe complications may take longer to clear completely.

When at grips with the decision about a necessary medical procedure, I have learned from several experiences, it becomes essentially important to leave nothing to chance and be very sure.

Why so? Because every decision we make bears equally severe repercussions.

So said, if you opt to go for arthroscopic knee surgery, be sure and informed about it and, most importantly, be prepared to tackle any post-operative complication that may set in after that.