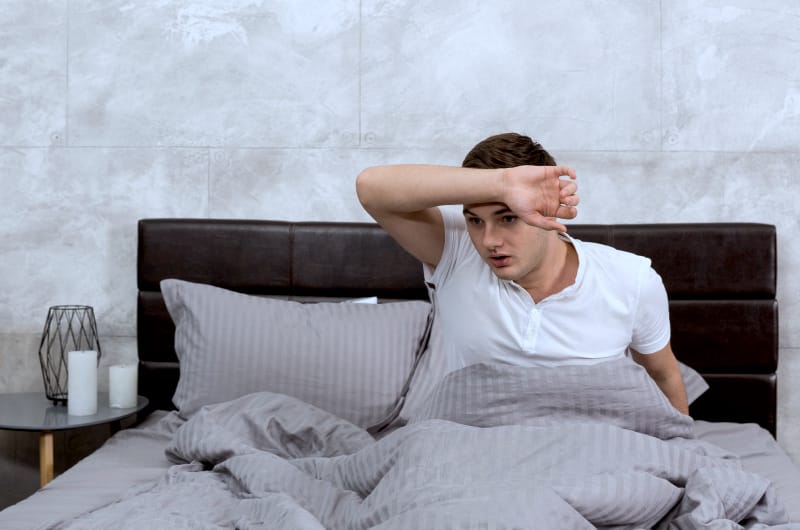 Protein sweats is another term for meat sweats, where people who have had a higher intake of meat might experience sweating. Protein is one of the hardest things for our body to break down and digest, and our body has to work harder and spend more energy to digest it, which can lead to a rise in body temperature and consequently lead to sweating it out. To prevent protein sweats, you can reduce your meat intake, avoid drinking beverages like alcohol with meat, space out your meals, work out regularly, and have a balanced diet. If there’s still excessive sweating, it’s better to visit a doctor.

You wake up in the middle of the night only to find yourself drenched in sweat in your bed.

Unable to sleep, you wake up, wondering what could have caused such an extreme reaction, and go spiraling down the list of causes.

If you’re able to pinpoint, you could see a pattern forming that this happens whenever you get a lot of protein intake in a single meal, especially whenever having large portions of meat. It’s also popularly known as meat sweats.

What are protein sweats?

If you’re not familiar with the concept of protein sweats, starting with its basics would be the first step toward preventing it.

The first doubt to cross your mind would be why only sometimes do you face these night sweats and not every day when you could be consuming protein each day.

Not all kinds of protein may have the same effect but eating animal protein is especially difficult for the body.

This is why it’s also known as meat sweats, when a person might sweat profusely after consuming large amounts of meat.

Certain food items are always easier for our body to digest.

But for other things, our body has to work too hard to digest because they are complex in nature, and our body takes effort to break them down.

Alcohol and protein require more energy and effort from our body to be digested. Carbohydrates are broken down quickly compared to complex foods such as high protein, especially animal meat.

People fear that sweating like this after high protein intake or having meat sweats is because they could be allergic to it or have an intolerance.

That’s not the case since sweating isn’t one of the symptoms of having an allergic reaction to eating meat.

Even for food intolerance, the common symptoms are mostly limited to having digestive problems such as diarrhea, gas, and nausea.

You can quickly rule out food intolerance and allergy from the possible explanations behind sweating.

Sweating is experienced when one is working out or doing any exercise, and it’s because energy is being spent on doing these exercises by our body. The more energy our body spends on exercising, the hotter we feel and begin to sweat.

Our body also uses this energy to digest our food, and the easier the food is to digest, the lesser energy is spent on it.

Since protein is complex in nature, it takes longer and harder, like 20 to 30 percent more, for the body to break it down.

This is how more energy is spent on it, and we begin to sweat. This can mainly occur if you eat animal protein once in a while.

Since your body isn’t used to digesting complex protein regularly, a once-in-a-while meal can make you sweat like crazy.

Scientists call this diet-induced thermogenesis or the thermic effect of food.

Sweating a lot is a major inconvenience, especially nighttime sweating.

So, there are a few things you can remember and take care of to prevent it from happening as much as possible.

Eating huge portions of animal meat is the biggest concern for these night sweats. Having considerable quantities in one sitting can quickly make you feel very heavy, nauseous, and sweat through your clothes.

A great example of this is in everyone’s favorite sitcom, Friends. In the thanksgiving episode, Joey bets with Monica to eat a whole turkey by himself.

This makes him sweat so much, and he’s even heard saying, “here come the meat sweats.”

Eating larger quantities of meat than what you’re used to can make it difficult for the body to break down the food.

Having some form of drink with the meal is a favorite amongst Americans, making them victims of obesity. The current being 42.4% in 2017 – 2018, according to CDC.

Once in a while can be accepted but only when you’re eating a lighter meal. When consuming meat, you need to eliminate any beverage, especially alcohol.

Alcohol and meat are the hardest for the human body to break down and digest, and together they can become a deadly combination, especially if eaten in a large quantity.

Have water even if you’re craving something to go with your meal. As boring and plain as it might sound, proper hydration aids in digestion, and it won’t make your already heavy meal even heavier.

You will sweat profusely and go into a food coma immediately.

When eating meat, limiting your meat in one sitting can seem not enough.

You can space out your meals and eat more in this way, and just avoid eating larger quantities in one sitting.

Decreasing overall body fat will decrease basal body temperature, and in turn, this will help reduce the chances of meat sweats.

Going for a walk is even better as an extra precautionary measure against sweating. Don’t sit down or have complete rest after a heavy meal with high protein.

How much meat do you need for meat sweats?

Having a heavy meal of meat that contains high protein is problematic in itself, and late-night meals also tend to become heavier for our digestive system.

Having more than 3 ounces of meat per meal can make you suffer from sweating, protein takes a longer time than any other food group to digest, and anything heavier than an average quantity can put you in for the sweats.

Every person’s body is different and can have a different intake of foods so depending on your meal size, try to eat smaller amounts and space out your meals for better digestion.

Can too much protein cause sweating?

A higher protein intake primarily found in meat can result in sweating profusely.

Our body doesn’t have to put too much effort into digesting foods belonging to the category of vegetables, fruits, fats, or grains. Even carbohydrates are more easily digestible than protein.

Protein requires harder work from the body to break down and digest. When so much energy is needed to digest food, the body tends to heat up, leading to sweating.

What foods can cause night sweats?

Some people might not be affected by eating any kind of food. Then others are sensitive to some foods.

Certain edible items and beverages can cause discomfort, such as sweating. Foods such as alcohol, large portions of meat, caffeine drinks, spicy or fatty foods, chocolates, tomato-based foods, and citrus foods.

Avoiding eating such foods that cause discomfort is the best way. But leaving foods altogether isn’t something everyone can do, so eliminating them from your dinner is still a good idea.

As night dawns, our body’s digestion system slows down.

How do I know my night sweats are serious?

You can quickly tell if your night sweats are becoming a problem, and it will start to hamper your life in many ways.

Waking up sweating too much in the night when your clothes and even bedsheet are sweaty isn’t good.

If they frequently disturb your sleep and other symptoms such as fever or weight loss, then there could be other health issues.

Get yourself examined by a professional to know if it’s just meat sweats or other problems.

Experiencing meat or protein sweats is something people might encounter in their lifetime.

It’s understandable to go through something like this when you’ve had a heavy meal of meat that contains high protein.

Our body is used to digesting easy food, and when it comes to a high protein, our body has to work double hard to break it down and digest it.

Preventing protein sweats means taking care of how much you eat and when you eat.

Try to have more balanced meals, and exercising can reduce the occurrences of sweating in the middle of the night.

Some people also switch to plant protein. It’s nothing to worry about, but if sweating makes your life troublesome and there’re other symptoms, it’s better to visit a doctor.