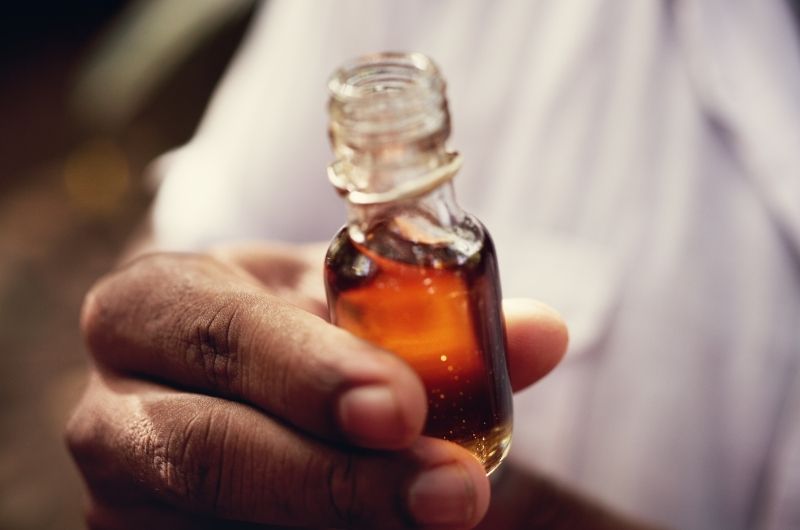 Vanilla extract is made of mature vanilla bean pods, water, and ethyl alcohol. The FDA states that it needs to have 35% of ethyl alcohol. When used in baking cakes or cookies, ethyl alcohol dries up even quicker than water, leaving no trace of alcohol in the end product. This makes baked goods safe to consume for anyone. When consumed by adding in foods or beverages that do not require baking, it can get you drunk. 4 to 5 ounces of pure extract is enough to get you drunk. You can try using substitutes or get vanilla flavorings.

Vanilla extract is one of those common household items found in almost every kitchen. Even if you don’t use it actively to bake cakes or chocolate chip cookies, you must have used it at least once in your lifetime.

But leave it up to people to even use this innocent kitchen item and turn it into something it’s not meant for.

Yes, I’m talking about people actually getting drunk from consuming this extract.

It might come off as a surprise, but yes, it’s easier than you think, and you don’t need large quantities for it!

Vanilla extract is less processed and is more expensive because of its more potent and pure vanilla flavor.

Anything that involves the word extract implies it’s purer in form than its other names or substitutes. That’s why it’s also a favorite amongst people who love to bake, as the pure nature of vanilla makes anything made by adding it more delicious and smells strongly of it.

This flavor is from a molecule called vanillin found in vanilla beans. The pure extract is made from mature vanilla bean pods aged 3 to 4 months.

This aging process allows it to produce vanilla flavors, including increased levels of vanillin.

It might also contain small amounts of sweeteners, including sugar, corn syrup, or dextrose.

The interesting part comes here after the vanilla bean pods have been allowed to age for 3 to 4 months. These pods are then added to a mixture of water and ethyl alcohol.

The alcohol is needed to draw out the vanillin and other compounds which infuse into the liquid. It’s a standard for vanilla extract.

In the U.S., the Food and Drug Administration (FDA) states that vanilla extract should contain at least 35% alcohol and 13.35 ounces (280) of vanilla beans per gallon (3.8 liters).

Alcohol is also an excellent preservative that gives this extract a good shelf life.

This ethyl alcohol, also known as ethanol, comes from sugar cane and is commonly found in alcoholic drinks such as whiskey, brandy, and beer.

How much vanilla extract do you need to get drunk?

About four to five ounces of vanilla extract is enough to make a person start getting drunk. That’s why it’s so easy to misuse this simple kitchen item and turn it into something it’s not intended to do.

The funny thing is you don’t even need to show your age proof to buy this extract from any store, which makes it easier to be purchased by anyone, including school kids.

In 2019, a school in Georgia told parents to watch their kids because they had been getting drunk by adding it to their coffee.

Why don’t I get drunk by eating food with vanilla extract?

Another question popping in your head right now will be if getting drunk from the vanilla extract is only possible if you consume it directly?

Or is it possible to get drunk by adding it to food?

You can’t get drunk by adding this extract to food, and it’s because ethyl alcohol dries up when exposed to heat, and it even dries up faster than water and only needs a temperature of 173 F to dry up.

The pure extract can only get someone drunk when added to foods that don’t require baking. Thus, adding it to beverages is one sneaky way people use it to get that buzz.

Can you get alcohol-free vanilla extract?

It’s not only for misusing vanilla extract, but some people might not want to consume even a tiny amount of ethyl alcohol even if it doesn’t get them drunk after being baked into a cake for personal reasons.

There can be alternatives found to pure extract, which are 100 percent free of the alcohol, or there can be substitutes that work the same.

You can easily find alcohol-free pure vanilla flavorings in the market which work almost the same.

Are vanilla extract and vanilla essence the same thing?

The only difference between real vanilla extract and vanilla essence is that essence is made using artificial flavors and colors.

Vanillin is a lab-made synthetic version used in essence, and it’s not aged like it’s done to make the extract.

Both contain alcohol, so using either can and will get you drunk if used in enough amount.

However, when it comes to cooking, using extract will make the final product richer and deeper in taste because you’re using real vanilla beans aged for a few months.

Extract would be best to use for desserts like puddings, custards, pastry creams, and icings. It would also be good to use in iced coffee or vanilla ice cream.

Essence would be suitable for baked goods since there won’t be a noticeable change, such as chocolate cake, chocolate chip cookies, cheesecake, or chocolate pudding.

How much alcohol is there in one teaspoon of vanilla extract?

Compared to other alcohols, it comes out to approximately 1.5 ounces of wine, 2.5 shots of hard liquor, or 3.5 beers. It’s enough to get a person to start feeling drunk.

Do you need an ID to buy vanilla extract?

Even though vanilla extract contains 35 percent of ethyl alcohol, a person doesn’t need ID proof to buy it.

Can you eat raw vanilla extract?

A person can eat raw vanilla extract but be prepared to get intoxicated because it contains 35 percent alcohol, making you drunk if consumed in enough quantity.

It could also cause an allergic reaction in some people leading to difficulty breathing, digestion issues, and headaches.

Can you add vanilla extract to coffee?

If you want to avoid adding sugar or creamers, you can substitute with a similar sweet taste and scent by adding vanilla extract. But keep in mind adding less than ¼ teaspoon is enough to sweeten an entire pot of coffee.

Adding too much can actually make you drunk since one standard bottle of vanilla extract sold in shops contains enough alcohol content to get you drunk, similar to 3.5 beers.

How do you remove alcohol from vanilla extract?

If you’re worried about alcohol in vanilla extract, you can’t separate the two.

Using the extract in baking anything will make the alcohol present in it dry up and doesn’t make you get drunk.

If you have a problem with the alcohol content, you can try using alternatives to extract by trying out vanilla flavorings or other substitutes that do a similar job.

What are substitutes for vanilla extract?

If you’re looking for alcohol-free extract, try using vanilla flavorings, as they would be the closest in pleasant flavor. Though they have a less powerful vanilla aroma and are not as rich as the extract, they can impact your final product.

Who could have thought school students would use a familiar cooking ingredient to spike their coffee? But that’s how easy it is to misuse it and get a slight buzz.

When used in baking cakes or adding it to coffee to enhance flavor and make your favorite chocolate chip cookies, this pure extract can be of great use, which is what it’s meant for in the first place.

The heat required for baking allows the alcohol to dry up, making the end product safe to consume. But when using the same natural or even artificial extract in beverages or food that needs no baking, it can be enough to make you drunk or get a DUI.