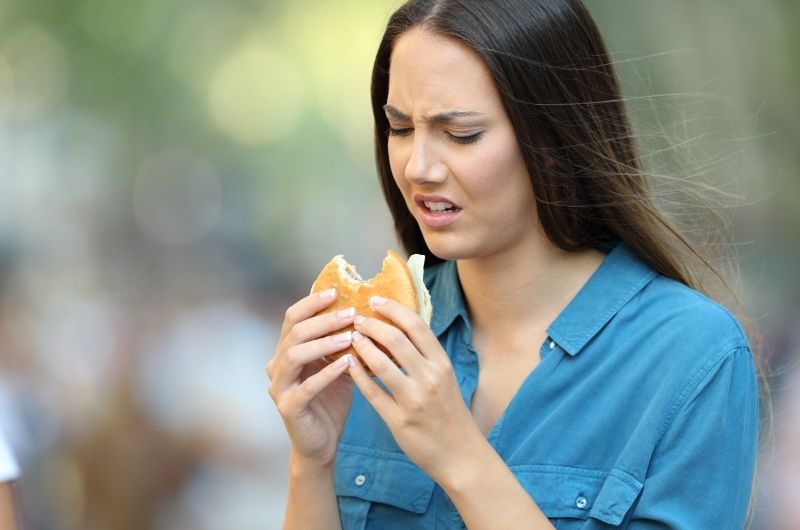 Gall bladder assists in digestion, but in case of intricacies, it can be removed through surgery. After its removal digestion occurs through the small intestine, and due to dietary change, bile reflux (bile may get back into the stomach, which can create an irritation to the esophagus wall), post-operation infection, and drugs and medication you may find your food less tasty. So, take food that can comply with your digestive system, avoid fatty foods and take high fiber food, and follow your doctor’s precautions.

The gallbladder’s function is to store bile secreted by the liver. Bile helps digest foods in the small intestines from the gallbladder.

Therefore the gallbladder and the bile it stores happen to be very instrumental to the entire digestive system.

The gallbladder can suffer from infections and conditions like all other organs.

Some common gallbladder conditions may include gall stones that occur when bile forms hard deposits. The deposits, now gall stones, can be very painful and uncomfortable.

Other gallbladder complications may also include gallbladder cancer, which can be very painful and discomforting.

Gallbladder complications may be treatable, but at some point, it becomes unavoidable to undergo surgery for the complete removal of the gallbladder, a procedure known as cholecystectomy.

Before and after the procedure, it may be pretty likely to have issues with appetite and taste. The lack of preference may be a symptom of some conditions before removing the gallbladder.

After the surgery, issues like that may be side effects of drugs used during the surgery or signs of postoperative infection.

With your gallbladder absent, the secreted bile is introduced directly into the small intestine to aid digestion.

It, therefore, may be possible to live everyday life without a gallbladder though you’re required to adjust your eating habits to exclude some foods that may be harmful.

Other likely causes may be bile reflux and several other probable causes that we may discuss throughout our article.

You may receive a recommendation that you adjust your dietary habits to avoid foods that may wreak havoc to your digestive system after gallbladder removal.

Such foods happen to be those that may be hard to digest and may take even longer.

You may have to avoid fatty foods like pork and bacon, dairy products like butter and cheese, processed foods like cakes and pies, and foods containing alcohol and caffeine.

On the contrary, you should discipline yourself to foods that don’t take long to digest.

They may include foods with high fiber and roughage, such as whole-grain meals and lentils, foods rich with minerals and vitamins like fruits and vegetables, low-fat foods, and lean meat for meat alternatives.

The changes mentioned above in dietary habits may mean many people.

Most of us are content and even happy to eat all the foods we may not eat after a gallbladder removal surgery.

If and when the surgery happens, they may find it very hard to come to terms with the tastes of the foods they may have to take for the sake of their digestive systems.

When the bile gets into the stomach, it mixes with the gastric contents of the stomach.

Factors in the stomach may force the mixture of stomach contents past the sphincter valve that divides the stomach and the esophagus.

The contents may then move along the esophagus even to the mouth, a condition known as Gastroesophageal reflux.

Given that the stomach contents contain bile and other gastric acids, they may take quite a toll in irritating the esophagus walls, the mouth, and the tongue, wherein the taste buds are essential for tasting food.

Bile reflux could probably be the reason nothing tastes good to you after a gallbladder removal surgery.

The irritation on the esophagus walls may be another reason for the lack of appetite.

During or after the surgical procedure to remove the gallbladder, also known as cholecystectomy, it may be possible to contract an infection.

Later on, after the entire process, the condition, if not checked, may escalate and bring with it symptoms such as nausea, vomiting, and general lack of appetite.

The symptoms may make anything you eat feel less tasty and less flavorful than it really should be.

Therefore, it becomes vital to ensure that the preparation for surgery and post-operation care and the surgery itself should be carried out with utmost efficiency of hygiene, sanitation, and sterilization to avoid any infections that may compromise the patient’s health.

Drugs and medications come in very handy during and after the surgery to remove the gallbladder.

Anesthetics have to make you unconscious during the entire procedure and reduce the pain.

After the surgery, you may get prescriptions for antibiotics, painkillers, and other medications required for your proper healing.

Some medicines may have long-term or short-term side effects that may alter how your food tastes in your mouth or even affect your appetite completely.

Even so, the side effects wear off once you are off the medications.

Can your gallbladder affect your taste?

Even so, medications used during and after gallbladder removal surgery could have side effects that affect your preference.

The same could happen if you get an infection after the surgery or in case of bile influx into the esophagus and mouth, affecting the taste buds.

Will I ever be able to eat normally after gallbladder removal?

After your gallbladder removal, it may be challenging for you to return to your regular eating habits.

You may have to stick to a healthier diet of fruits, vegetables, and foods rich in fiber, roughage, minerals, and vitamins.

Gallbladder complications might be a very common problem nowadays.

Come to think of gall stones and gallbladder cancer. Both can be very painful and uncomfortable, and their only effective treatment may be the removal of the gallbladder itself.

Not only is cholecystectomy life-saving, but it may be a tool that, in the long run, enhances the quality of life and lengthens one’s life expectancy. Your diet choices become very healthy.

So even if you get aggrieved by taste, rest assured that may be a very little hurdle compared to the long-term benefits you stand to gain.

But if and when you believe there could be more to how you feel, feel free to visit your doctor once again.