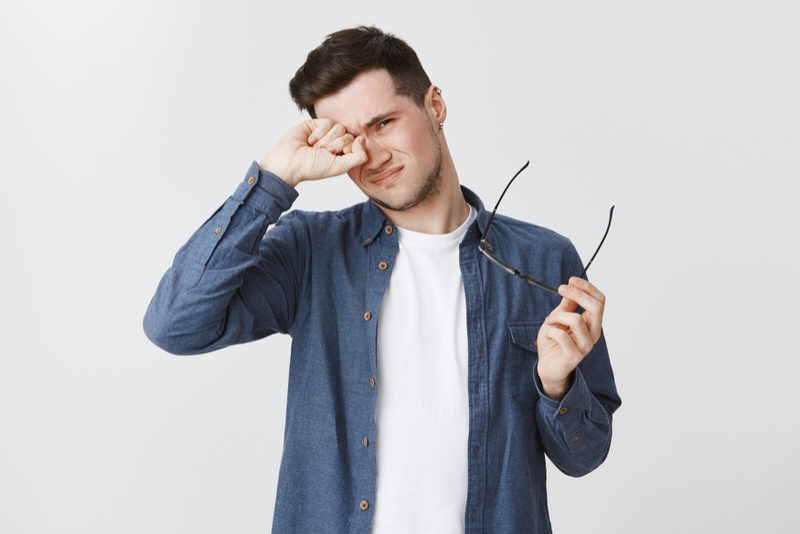 When you’re not wearing glasses, its lasting sensation could be due to your sensory system getting used to your wearing them all the time, or it’s a sign of phantom eye syndrome (PES). It should be nothing more than annoying and embarrassing when you’ve been adjusting the rim of your glasses that’s not even there. Although there is no medicine to make it stop, you may check on your eye doctor and switch to more lightweight eyeglasses. You may also choose to get LASIK surgery to rid the eyeglasses or contact lenses forever.

If you’ve been wearing prescription glasses for a long time now, maybe you’ve forgotten the feeling the first time you put them on. It’s about two years since I had my first glasses, and I can still remember the weird feeling it resulted in my vision.

When I looked down, the part of the floor I was focusing on was in an odd position, and it wasn’t on the same level as what I could see out of the corner of my eyeglasses. I guess it happened because my eyes felt new to my corrective lenses.

A few months later, I could tell there had been a huge difference because I felt comfortable with my glasses and even felt them on when I was not wearing one.

What causes this feeling?

I couldn’t exactly tell what could cause this condition. But as far as I know, it shouldn’t be a severe case. Based on my experience and what people might tell you, it could result from your brain getting used to your wearing glasses for a long time.

It’s just like when you get out of the water after swimming for hours. You’d still feel the ocean waves against your body when you get home to rest.

Wearing eyeglasses could be annoying, especially if you can see its rim getting in the way of your vision and the sensation it has on your face. Eventually, you will get used to it, and every time you wear your glasses, your brain will automatically ignore its presence or sensation on your temples. And because you got used to wearing glasses for long periods, it may happen that when you’d take them off, you’d still feel their sensation.

It’s hard to tell if it’s a symptom of an underlying disease, but the best thing you can do is schedule a check-up with your trusted eye doctor.

Below are some of the things that may explain your problem.

Have you heard of this term? Or maybe you’ve just come across this word today. Well, neural adaptation or sensory adaptation happens when our brain adapts to changes in the sensory information delivered by our five senses.

As a result, we develop less sensitivity to things or respond much less to the stimuli in our environment after constant exposure to them.

For example, you may wonder how people living in the cities can sleep well despite the continuous urban noises outside their windows. Maybe if it’s your first time moving into an apartment facing the city road then, you’ll eventually get annoyed by the noises.

As days pass, you will get to it, and you won’t even notice how busy the streets are unless you take a break and listen outside your window.

There are two types of neural adaptation, and each varies by how you process or respond to a stimulus. Let’s read below to know about them.

It occurs a minute or even just a few seconds after exposure to a stimulus. For example, when you’re out on a bright sunny day to hang your laundry to dry, your pupils sink into a smaller size to let in less light.

When you go back inside, you’ll feel like there’s a black cloud covering your vision which, slowly disintegrates until it goes back to normal.

In those few seconds, your pupils were growing in size to let in more light, and because you were out in the bright light, you’re eyes got used to it and had to adjust in the darker room.

Depending on your psychological mechanisms, you may develop slow-paced adaptation which, could take from minutes to months or even years.

For instance, it took me months to get used to my corrective lenses. At first, I thought my eye doctor had me the wrong prescription, but it felt like I adapted its effect on my eyes over time, and I could see that the floor was actually on the same level!

Most of the time, I forget to wear my glasses, but I won’t notice unless I try to adjust their fit on my nose (which, by the way, is not there) because it always feels like I have them on.

Research also suggests that the more constant exposure you have to a stimulus, the more likely it will develop slower and long-lasting forms of adaptation.

PES is when patients may still feel surgical pain and visual perceptions followed by an eye removal surgery. It’s like experiencing painful sensations and hallucinations with colors and shapes or even feeling like they’re still having perceptions on their removed eyes.

So, if you’ve been wearing glasses for a long time now and there are incidents when you’d feel like you have them on when you’ve forgotten to wear them in the first place, it’s a most likely similar effect of phantom eye syndrome.

PES commonly occurs in patients who switch from wearing eyeglasses to contact lenses. They wouldn’t realize they’ve been pushing up the rim of a “phantom” or imaginary glasses on their nose or adjust the temple of the eyeglasses on their head (like they’re wearing one) unless you give them weird looks.

How can I make PES go away?

If you just had new pairs of eyeglasses or contact lenses, your condition should get better over time.

Develop a habit of wearing your glasses as much as possible as your eye doctor suggests.

Try not to leave them on your bed or chairs as you’ll most likely sit or lie on them, especially if you’ve been experiencing phantom eye syndrome.

You may also visit your eye doctor if you feel like:

There are no known medicines to treat your condition. If you’ve been dealing with it for a long time now and wearing glasses affects your daily activities, you might consider getting LASIK surgery which, could cost a lot. But, maybe it would make your life much easier without wearing eyeglasses or contact lenses anymore.

Some people get the procedure for about $4000-$6000 after spending about $500 on eyeglasses each year. However, if you can’t afford the treatment, you will get used to the sensation of your glasses, whether or you’re wearing them or not, as time passes as I did.

Please visit your eye doctor if you think it’s not getting any better and causes you so much stress.

Some people may think that wearing eyeglasses makes you look smart or geeky.

It is something we get a lot, but they don’t know what’s it’s like to see everything in a blur or deal with the feeling like you’re wearing eyeglasses, but you’re not. At some point, you will look stupid for pushing up the rim of your glasses when they’re not even there.

Whether it’s your body getting used to the sensation of your glasses or you’re experiencing the effect of phantom eye syndrome, it should get better in time. You may visit your eye doctor and have a new set of eyeglasses if you’ve been feeling uncomfortable with your current pairs.

Choose a lightweight frame to reduce its heavy sensation on your temples. And if you think you’re not getting any better, getting LASIK surgery would be your best option.