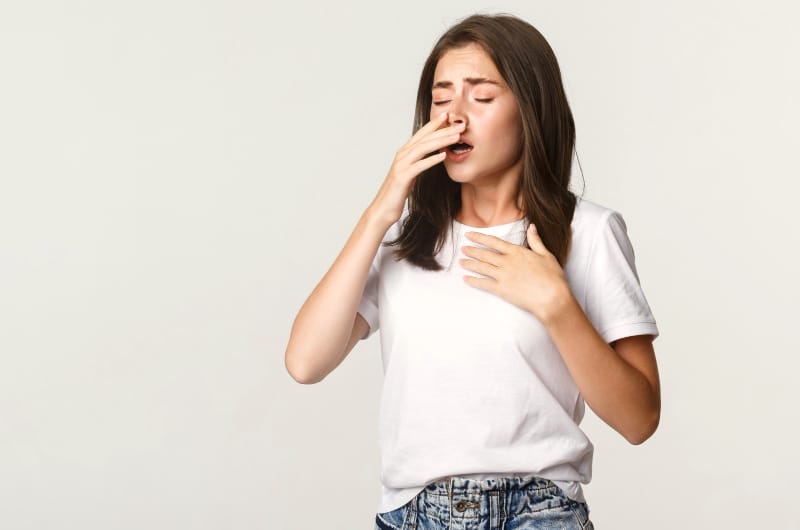 A neti pot is an excellent way to clear your nasal passage and is a good home treatment to help with a sinus infection. The FDA recommends using sterilized, or boiled water as tap water can be harmful. Unsterilized water contains low levels of organisms like amoebas that can live in nasal passages and cause life-threatening infections. Accidentally using tap water for once won’t prove to be toxic, but continuous use might. Make sure your water is sterilized or boiled, and add some salt to make it easier to use for your nasal passageways.

Although a popular choice and relatively easy to use, things might quickly go wrong if you’re not careful.

A neti pot has its own safety guidelines for using the device properly, including which type of water is safe to use for irrigation. But CDC recommends using tap water proves to be the most harmful way to continue pouring down your nose.

But if you can drink tap water, why is it wrong to use it for your nasal irrigation?

Using a neti pot for sinus

If you’re suffering from sinus or even congestion from cold, using a neti pot is highly recommended for its easy use and quick result.

It helps clear your nasal passages by rinsing out the mucus trapped due to cold, the flu, or sinus infections.

Though there’re different irrigation tools, such as squeeze bottles, bulb syringes, and battery-operated devices, a neti pot is quite popular.

When using a neti pot, the most important thing to remember is the water you’re using to pour into your nose.

Sterilized water is recommended, and keeping the pot clean is vital to avoid various illnesses.

Dangers of using tap water in a neti pot

Some people don’t take sterilized water too seriously and might use tap water in their neti pot to rinse their noses.

While tap water seems perfectly fine for a shower, cleaning your dishes, and even drinking it once in a while, it might not be suitable for use to clear out your nose.

Tap water isn’t safe because it’s not adequately filtered or treated, leaving it at risk of contamination.

When drinking this tap water, your stomach acid kills the low-level organisms, such as amoebas. Neither do they have anywhere to settle down or cause the damage they can probably cause when used for your nose.

In your nose, these organisms can stay alive in nasal passages and cause some severe damage by causing rare infections.

Another reason not to use tap water for nasal irrigation is the presence of E. coli and bacteria legionella.

There have been several cases where people didn’t follow the instructions properly and used tap water, resulting in serious infections taking their lives away in just a few days.

Using tap water can cause you to catch various illnesses and infections, one of which is caused by the Balamuthia Mandrillaris amoeba, known as amoebic meningitis.

In one such rare case, a 69-year-old woman died after contracting this brain infecting amoeba by using tap water.

First, she developed a quarter-size rash on her nose, which couldn’t disappear despite several treatments.

A year later, she had a seizure, and scans revealed a lesion in her brain. According to CDC, doctors discovered her brain was infected by this amoeba which causes severe brain and spinal cord infections.

It’s commonly found in dust, soil, and water. Since it’s a rare infection, its diagnosis is still tricky, and so is the treatment.

While drinking tap water might not be much of an issue when you drink it, it can cause serious harm as these organisms can stay alive in your nasal cavity.

Known as Naegleria fowleri, it has the potential to risk the lives of people using tap water for their neti pot. It’s a rare infection that can enter your nose and travel through the olfactory nerve to your brain.

Those who suffered from this infection noticed the following symptoms:

When using a neti pot, doctors recommend using sterilized water because of the risk of infections from tap water over a certain period.

You might accidentally end up using tap water once, but that shouldn’t be an immediate cause of concern.

While there’s no telling, using it once won’t probably make you get this rare infection. Usually, the symptoms show in a couple of days and can quickly become fatal.

It’s probably best to immediately go to your doctor and let him know about it. He might then test to see if you have caught any such infection.

Given how tap water can harm those using neti pots to clear their nasal passage, it’s best to know and familiarize yourself with the types of water you should be using.

According to FDA, there’re three types of water safe to use for neti pots:

Just adding a salt packet to your tap water won’t be enough to kill various bacteria present in it.

You would still need to boil it, let it cool down, and then add salt to it to make it better for use.

Add salt to the boiled or sterilized water because plain water might make your mucous cells swell a little because those cells have some salt, and water likes to even out the salt concentration across a membrane.

How to get sinus relief?

If you suffer from sinus issues, there’re various ways to treat them at home.

Using these home treatments works much better for some people than taking unnecessary antibiotics.

Sleeping with a humidifier in the room, using essential oil in a diffuser, and using a mentholated chest rub are a few ways to do so.

If these don’t work for you because of a severe sinus infection, it’s better to seek medical help from a doctor.

What are the side effects of using neti pots?

Using neti pots for your nasal irrigation can sometimes be tricky initially, and it takes two or three tries to get used to it.

Sometimes people might even suffer from a few side effects such as a burning or tingling sensation in the nose or slight nasal irritation.

These are temporary and should go away in a few days.

In rare cases, people also get a nosebleed, but that’s when people overuse this device which can dry up their nasal passages, causing a nosebleed.

Can you get a brain infection from using a neti pot?

There’re specific guidelines for using a nasal irrigation device such as a neti pot. When it comes to using water, it should definitely be sterilized, and using tap water leaves a person open to rare but severe brain infections.

Tap water might contain specific brain-affecting amoeba, which can make a person severely sick. But this infection is rare.

Doctors advise not to use tap water in any case, and if you can’t find sterilized water, it’s best to boil your tap water for 5 minutes to kill any bacteria.

How do I know I have brain-eating amoeba?

It’s a rare infection in water that can enter the body when people swim or dive in warm freshwater places like lakes and rivers.

The amoeba enters the nasal passage through the nose and travels up to the brain, where it destroys it.

One can’t catch this infection from drinking contaminated water but might get it when using neti pots to clear their nasal passage. Then this amoeba can thrive in the space.

Later symptoms include stiff neck, confusion, lack of attention to people and surroundings, loss of balance, seizures, and hallucinations.

Is it normal to have a headache after a sinus rinse?

The common side effects after using a neti pot include minor nasal irritation, and some people also face nosebleeds and headaches when overusing this technique.

You should immediately seek medical attention if you’re experiencing headaches with other symptoms and have used tap water in your neti pot. It could be a rare infection known as amoeba meningitis.

Neti pots are a safe and great way to reduce your upper respiratory congestion at home. But there’re certain guidelines one should follow, such as using sterilized water and saline solution.

Using tap water can present a risk of an amoeba infection, which can be quite fatal. Although it’s a rare infection, it’s best to use sterilized water as recommended or boil tap water for 5 minutes before using it.

If you accidentally used tap water, don’t panic, as the possibility of getting sick with a rare infection is relatively low.