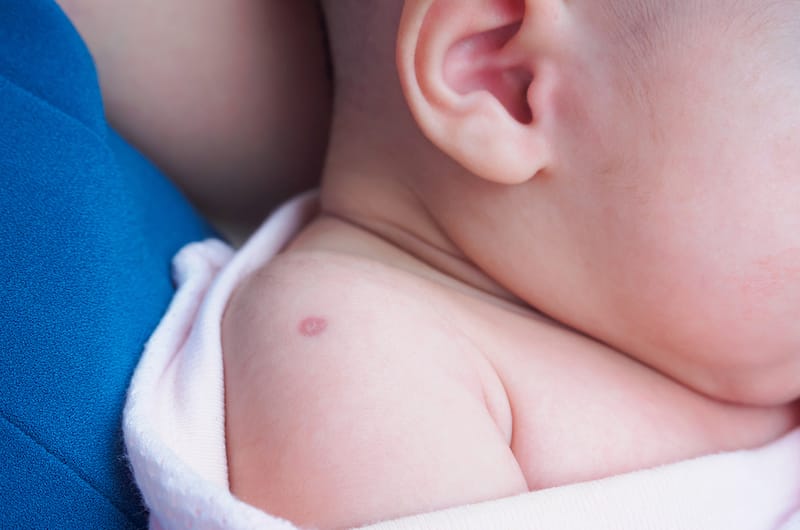 Babies aren’t born with scars unless they’ve had an injury when they were still in your womb due to amniocentesis or other invasive prenatal procedures. Sometimes, third or supernumerary nipples could look like scars on your baby’s “milk line” area. These may appear like pigmented soft circular tissue with or without a tiny bump (nipple) on it. Scarring on babies is also possible at birth or if they had to receive invasive neonatal intensive care following their birth.

Scars form when your skin is healing from an open cut or wound.

When an injury damages your skin, fibroblasts which produce collagen fibers, gather at the site to reconnect damaged skin tissues and form new ones.

Notice how a thick crust forms moments after you’re wounded? That’s called the scab. It temporarily covers up your wound as the collagen fibers work in building up new tissues underneath.

Eventually, the scab will fall off once your skin heals, leaving your skin with a scar.

Below we’ll talk more about scars, birthmarks, and some rare physical conditions, particularly in newborns.

The 5 types of scars

There are several types of scars which include the following:

How do you get scars?

Everyone can develop a scar when they’ve experienced something that damages their skin like burns, insect bites, acne, piercings, tattoos, surgery, and other forms of injury.

Scarring may also happen inside your body due to surgical procedures or diseases like Asherman’s syndrome and Peyronie’s disease.

How long will scars stay red?

Many things affect your wound healing and the appearance of your scar. Below are the following:

How long will scars appear red?

In the first few days up to two weeks, your wound may appear red, tender, and swollen.

Skin repairing then follows, lasting up to six weeks. The scar may appear red, thicker, and raised, making it more noticeable and uncomfortable.

Lastly, your body will work on softening and flattening your scars, which can last from twelve months up to eighteen months.

Scars always form when there’s an injury or a wound. It’s permanent, but some may fade and be barely noticeable over time.

Scars can hurt because these tissues are tighter than your original skin, restricting your movement.

If your wound is also very deep, it may result in long-term pain and numbness on the scarring site. Remember to always keep your scar from sun exposure as it’s prone to sun damage.

Although scars don’t tan, when it’s exposed to the sun, they will discolor and would be more noticeable.

Can you pass down scars?

Your parents’ illnesses or diseases may pass upon you, but you can’t inherit their scars.

Some of your parents’ characteristics, such as their eye color, dimples, freckles, and several others, are the common characteristics you may inherit.

They develop through life events and would involve wound healing processes. This won’t affect the genetic code you’ll get from your parents.

Can you be born with a scar?

It’s only very rare that a baby can be born with a scar.

Scarring on babies shouldn’t be due to their parents’ genes but could be highly caused by prenatal procedures.

Babies who have scars at birth must have acquired injury during invasive procedures like amniocentesis.

A clinical study has shown that babies who acquired injury due to amniocentesis at 16-20 weeks gestation and are prematurely born can initiate wound healing, causing scars to form over their wounds.

There are also cases when babies are born with third or supernumerary nipples, which may look like scars.

It would appear like soft circular tissue with a raised tiny bump on your baby’s “milk line” area. Some would often appear with no bumps or features like nipples and could grow anywhere on your baby’s body.

Some scars may also develop on babies due to complications during their birth.

There was an incident when a baby received 13 stitches across her left cheek due to complications when she was born in C-section.

The doctors who did the surgery said that the baby’s face was very close to the placenta wall when the surgery was done. They also confirmed that incidents like this could happen when complications occur during C-sections.

Scars that develop on babies in the early weeks or months following their birth could be due to neonatal intensive care procedures.

Most of the techniques used in these procedures are very invasive and would leave a high risk of skin damage to babies. Hence, long-term scarring is possible.

What are the red marks on your newborn’s face?

Those could possibly be birthmarks.

These are spots or patches of skin that may appear raised or flat in pink, red, blue, purple, white, brown, tan, or black colors.

Most birthmarks are harmless, but some are related to underlying health conditions.

Vascular birthmarks are often made up of extra blood vessels that may feel warm to touch and appear pink, red, or blue in color.

These birthmarks may look like flat pink or red patches of skin that contain capillaries.

Nevus simplex is often found between the eyelids, forehead, under the nose, upper lip, and the back of the neck.

This type of birthmark is also called “salmon patch,” “angel kiss,” and “stork bite.” They will become more noticeable when your baby is active or emotional.

These birthmarks may fade and disappear entirely on their own.

These may look like nevus simplex but affects more areas in your baby’s face or body.

A port-wine stain may gradually grow as your child grows and become darker and thicker.

They’re usually harmless, but when it affects your baby’s eyelids or forehead, they may be related to Weber syndrome, which needs medical attention immediately.

From the name itself, it describes a vein in your baby’s skin that didn’t form properly.

These may appear bluish or purplish, which can grow larger. In very rare cases, small clots may form in these veins, becoming hard and painful.

These birthmarks are common in premature babies.

They can overgrow then, fade, and eventually disappears altogether.

Strawberry hemangioma will appear red if they form on top of your baby’s skin and may look like bruises when they grow deeper in the skin.

Sometimes, they may bleed or become infected.

These rarely occur and appear like a large round bump or an oval mass.

These birthmarks have tiny red blood vessels visible with a white ring around their base.

They are typically purplish or bluish in color and may or may not disappear entirely.

These are spots or patches of your baby’s skin containing extra pigment. Below are the common types of pigmented birthmarks:

These are commonly known as moles, which are brown, pink, red, or black. Sometimes they may appear like bumps and have hair on them.

They’re usually harmless but may grow as your child grows.

Larger kinds of these birthmarks are at a high risk of developing melanoma.

Having multiple of these could also signal your baby’s spinal cord and brain problems.

2. Coffee with milk or café-au-lait

These may appear flat, round, and oval-shaped with light brown color.

They are harmless but can become darker when exposed to the sun.

These mainly occur in babies with highly pigmented skin, usually found on their lower back and bottom.

They may appear in brown, gray, blue, and/or black.

This type of birthmark may appear in unique patterns like lines and swirls. Its pigmentation may be affected by sun exposure making it look like it’s spreading.

Is it rare to have no birthmarks?

It’s pretty common for babies to be born with a birthmark.

They aren’t hereditary, but if they’re related to some genetic condition, it’s most likely that the baby inherited the birthmarks from their parents.

There’s nothing wrong with having no birthmarks. It doesn’t signal any health conditions or should be any cause of concern.

What is Harlequin baby syndrome?

This is a type of genetic disorder that affects a baby’s skin. It’s also known as Harlequin ichthyosis, which is considered the most severe type of ichthyosis.

Ichthyosis is a family of skin disorders that cause scaly, dry skin.

Harlequin babies suffer the most severe forms of this condition. It was considered fatal before the rise of new medical advances and intensive care.

Babies with this syndrome may suffer from closing their eyes, eating or drinking milk, having their eyelids turned inside out, moving their arms and legs, breathing, rapid lowering of their temperature, dehydration, infection, and many other complications.

Harlequin babies require immediate neonatal intensive care. Because there’s no cure for the disorder, consistent management is crucial for the baby to live longer and healthier.

Yes, most particularly in babies born with no skull. This puts them at risk of fatal hemorrhage and/or infection.

Aplasia cutis congenital is a rare condition caused by genetics, a syndrome, intrauterine infection from a varicella-zoster virus or herpes simplex virus, and exposure to teratogens.

About 20% of babies with the condition are born with no skull.

Can you be born without a brain?

Babies born without a brain would most likely die during birth.

A very severe congenital defect called anencephaly describes babies born with missing parts of their brain, skull, and scalp. This is extremely rare.

No treatments are available for this condition, and if the baby survives, they would be less likely to live long.

Can you be born without a nose or eyes?

A baby born without a nose is another rare congenital condition.
This condition is called arhinia, which describes babies born with only a half of their nose or entirely without it.

Babies with arhinia may still survive and would require surgery and other treatments to help their breathing.

Another very rare congenital anomaly is anophthalmia which describes babies born with one or both of their eyes missing.

Can a baby be born without any bones?

There are no studies showing babies born without a body or bones.
However, a very rare genetic disorder called hypophosphatasia (HPP) could make your baby grow up, having their bones fragile and breaking down quickly.

If a baby grows up with this condition, they may feel like they have no bones and would have to spend most of their lives in bed.

The majority of babies with HPP die before reaching 5 years old.

Scars are natural. They are part of wound healing. The biggest problem is that they tend to become a nuisance, especially when they grow on exposed skin areas. Scars are permanent, but some will gradually fade away and be barely noticeable.

Birthmarks, on the other hand, have no known cause. They’re mostly harmless, but others could signal an underlying health condition.

It’s important to talk to your pediatrician if your baby’s scars and/or birthmarks cause any problems.