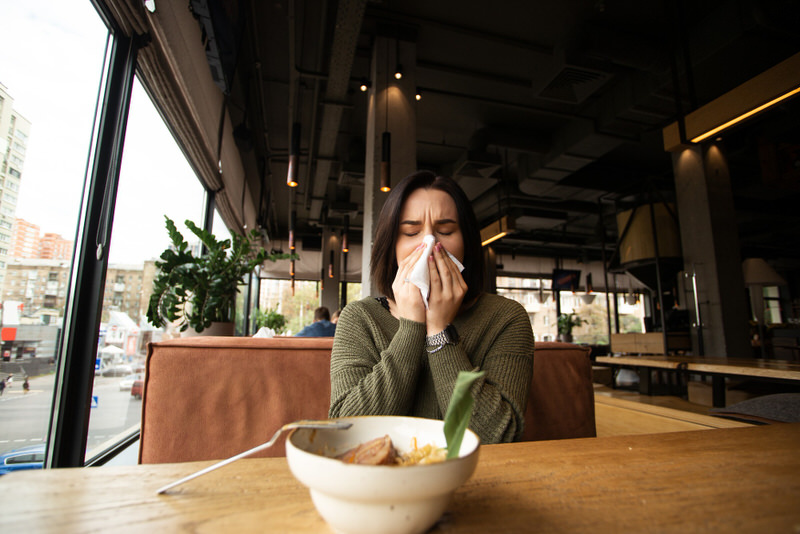 The Rhinitis that results from eating especially spicy food, hot foods, or sometimes smoking is called gustatory Rhinitis. The running nose in this condition starts after we have eaten something that triggers it. Once we have started eating, the symptoms set in, and our nose starts running in the middle of finishing the trigger food.

Back in 2018, I developed this runny nose condition as winter was approaching. Every time I was eating, my nose would run seriously. So to get rid of this, I reached out to my doctor.

My doctor helped me eliminate the foods that acted as triggers, and after medication, I recovered, and I was up and working once again. So, let’s get into the reasons behind the running nose and the possible solutions we can have!

What causes a running nose?

Many things might be causing us the running nose. Running nose gets referred to as Rhinitis in medical terms. According to the cause behind Rhinitis, we get different types of Rhinitis.

We may experience a watery runny nose immediately we get to our meal. We will notice clear watery fluid from our nasal mucosa or nostrils. This feeling leaves us uncomfortable and unable even to finish our food.

As for postnasal drip, the mucus drips at the back of the nose and into the throat. Having mucus at the back of our throat may normally happen since it helps in keeping us healthy.

Mucus acts as a natural lubricant as well. However, when the mucus drips in large amounts and coughs it out, it becomes bothersome.

When this happens, we may feel difficulty in finishing our food. The feeling will leave a sick feeling that will cause us suffering if we won’t eat comfortably.

Unlike other forms of Rhinitis, gustatory Rhinitis doesn’t cause sneezing or nasal congestion. Instead, the slim mucus pours out from the nostrils or drips at the throat when eating.

Unlike other forms of Rhinitis that have causative allergens that result in their symptoms, various food types trigger gustatory Rhinitis.

These foods will be most likely cause this condition after eating them. We develop this type of Rhinitis after eating some of the following foods.

Although the symptoms get triggered by different foods in different people, we tend to develop this condition upon eating one of the above foods.

Food to use and avoid while having a running nose

The foods trigger the stimulation of the trigeminal sensory nerve. This nerve causes the production of the excess mucus we see coming out when eating.

So let’s see what foods should be avoided and included during meal times to help ease the symptoms of gustatory rhinitis in the table below.

We get confused by our symptoms on most occasions. The symptoms may leave us wondering if any other people suffer the weird symptoms. For example, how will our nose start running from nowhere immediately we start ravishing our meals?

I wondered if the symptoms were anything normal when my nose started running through my hot sauce. To get a diagnosis, we need to visit our doctor and get professional diagnosis, advice, and treatment. Then, the doctor can diagnose you even without a test.

The runny nose symptom during mealtime and postnasal drip provide the ultimate diagnosis. The other types of Rhinitis requiring a test come with sneezing and red, teary eyes always absent with gustatory Rhinitis.

Who has a high chance of getting a running nose during eating?

As much as we love indulging in spicy foods, they may cause us many health issues. For example, spices cause hyperacidity in our bodies which may result in an ulcer.

Apart from this, spicy food might be the cause of our running nose. This is because the spice triggers the trigeminal sensory nerve stimulation.

This stimulation will, in turn, cause high mucus production that gives us a running nose before we even finish our spicy plate of food.

The condition may also affect people who smoke. Just like spicy food, cigarette smoke triggers the reaction. In this way, the trigeminal sensory nerve gets very sensitive, and upon eating, the running nose starts.

People who eat their trigger foods will be presented with these symptoms more often. If you get a running nose and postnasal drip after eating a certain type of food, it may a good sign.

This reaction will help you in eliminating the trigger that causes the production of excessive mucus. Different foods may trigger the condition in some people and not in others.

By understanding our triggers, we may keep away from them and solve the problem without medication.

Is there a treatment for gustatory Rhinitis?

Like other Rhinitis forms, our health professionals will find a solution to end the embarrassment during eating. By prescribing the Ipratropium bromide medication, we may start eating food comfortably.

This drug has no addictive reactions, and once your triggers stop, you may go back to not using it. So, we will get to enjoy some spicy food without the running nose embarrassment now.

Imagine going for a special dinner and the symptoms set in unexpectedly. Good night dinner and great memories, they’ll go down the drain due to a running nose spree.

Can a food allergy cause a running nose?

In other cases, running nose during meals may be a result of food allergy. If this were the case, we would get the symptom immediately after eating the suspected food causing the allergic reaction. However, keen people may point out their exact triggers and try to avoid them.

Running nose as a result of a food allergy comes associated with other symptoms such as:

If the runny nose during eating comes alongside the above symptoms, the doctor may highly diagnose you with a food allergy. Most food allergies tend to be allergies to proteins, nuts, or wheat.

The treatment involves medications to treat the symptoms and avoidance of the food allergen. By avoiding the food that triggers these reactions for a while, the allergy may go away.

The medications help in treating the severe symptoms allowing us to lead our normal lives once more.

Why do I get a running nose once I start eating or any time I am having a meal?

As discussed above, the runny nose might result from a food allergy or gustatory rhinitis disease. But, getting a doctor’s diagnosis will help in identifying the main cause of the ailment. And, with proper medication and avoidance of the food triggers, life goes back to how it used to be.

Can taking peppered food give me a running nose at mealtimes?

If you notice that this happens immediately after taking peppery food, then the spice in the pepper may be causing the triggers resulting in a runny nose.

Try avoiding any spices that may lead to this reaction. A visit to the doctor may get you drugs to keep the nasty reaction away too.

Do fruits trigger a running nose during meals?

Since our bodies react differently to different triggers, you may find some people experiencing a running nose while eating a fruit of a fruit pudding.

I used to experience this feeling when eating pineapples. Since many different things may trigger a reaction, try to find what reacts with your body and avoid it.

Yes, with avoidance of the main triggers, we may enjoy a meal without worrying about a running nose. With the prescription drug Ipratropium bromide, you get to eat all foods without triggering a runny nose.

Whether we find the cause to be an allergic reaction to food or gustatory Rhinitis, the provided treatment measures help us achieve comfort.

It doesn’t mean that we have a weird condition, rather a medical condition with a solution. Medication and triggers avoidance guarantees us comfort and fun while eating our food.

The following table provides us with a table of the foods that help us stay healthy and irritation-free.

Keeping the perfect nutrition as provided below will help us stay healthy. Our bodies will build up immunity against all forms of rhinitis and food allergies by avoiding spicy and unhealthy diets.