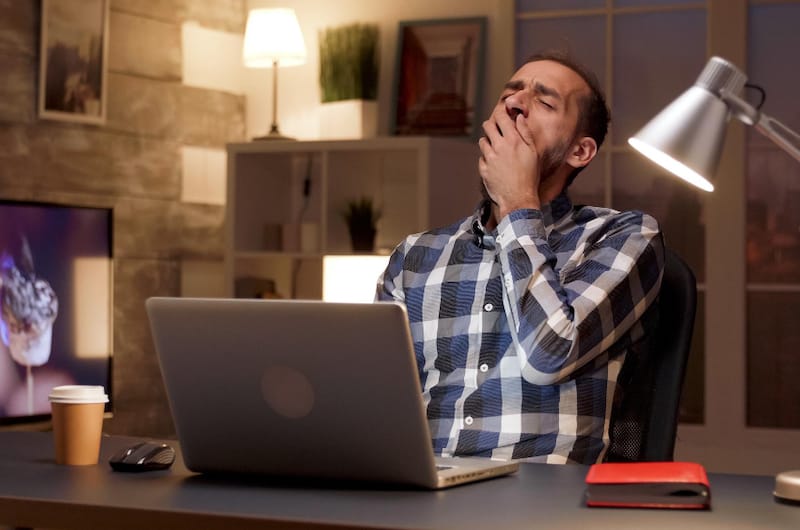 Your body usually shakes or shivers when the body temperature is down. Shaking helps your body to regain or maintain a normal temperature. While yawning occurs to help regulate your brain’s temperature and bring it down. There could be times when both yawning and shaking occur as your brain is trying to cool down, but your body is trying to increase the core temperature. Most frequently takes place in winter or when you’re getting out of bed in the morning. There’s nothing wrong in experiencing both of these involuntary actions together. But if you constantly find yourself shaking when yawning, it’s best to seek professional advice from a doctor.

There are multiple theories behind why we might yawn. While some people believe it’s because of a lack of oxygen, others think it’s because our lungs need to stretch.

But the most scientifically backed theory is that yawning is a way for our body to regulate our brain’s temperature. But sometimes, this yawning might be accompanied by weird things like shaking, which can be confusing.

While you might not shake or shiver each time, sometimes it’s very apparent, and there’s a valid reason behind this phenomenon.

Why do we yawn?

It’s a natural phenomenon, and animals and humans both yawn at any time of the day. It’s also contagious, and you would often find yourself yawning if someone around you just yawned.

While yawning does include inhaling more oxygen than what you do in normal breathing, it doesn’t mean your body requires more oxygen.

But yawning occurs because your brain needs to regulate its temperature. A study published in 2014 in the journal Physiology & Behavior lets us know that people yawned less in winter as compared to other seasons.

This could mean that if your brain’s temperature rises, your body yawns in order to inhale air that can help cool down your brain.

Well, no wonder we tend to yawn so much while working or kids do while studying!

When doing any particular task, you would notice more frequent yawning. It happens as our brain is working hard and tends to heat up more than other organs.

You would also yawn before bedtime as the body and brain prepare to cool down and relax in order to achieve sleep.

You could also feel bored, and your body wants to wake itself up. Yawning helps the lungs and their tissue stretch and allows the body to flex its muscles and joints.

This motion helps force blood toward your face and brain to increase alertness. So, as you wake up in the morning, you will notice yourself yawning again.

While this explains why we tend to yawn, it still doesn’t explain why a person would shake or shiver while yawning.

Why does my body shake when I yawn?

Shivering or shaking is another subconscious thing your body would do. When you start feeling cold, and the surface of your skin gets chilled, the receptors send signals to the brain.

This activates the body’s warming reflexes. In turn, your body shivers or shakes, and the muscles in your arms, legs, and jaw contract and expand quickly.

Shaking or shivering is a way for your body to raise its core temperature. As your muscles relax and contract, your body warms up.

Although shaking is a sign that your body is cold, it could also be a sign of an illness, infection, or other health problem.

Shaking while yawning could occur in some instances. For example, when you wake up and get out of bed.

In this case, while your brain is trying to wake up by yawning, your body could suddenly feel cold while getting out of bed, resulting in shaking.

Only in some instances could both occur together. It could be more common in winter as your body feels cold, but your brain wants to cool down.

Generally, it’s not a thing to worry over as both are pretty standard things to occur in the human body.

How can I prevent yawning?

Most people go about their day without thinking twice about yawning and how to prevent it. But sometimes, we might want to yawn less or prevent it because we find it annoying.

You could try a few things, such as:

How can I prevent chills?

In winter, people often get the occasional shivering and shaking even though they might not be ill. It’s better to dress up warmly and wear layers to avoid shaking.

If you’re naturally not a very warm person, it’s good to drink warm water and consume soups or foods that can provide internal warmth to your body, such as nuts.

Remember waking up from bed could easily make you sick, so before you do get out, wear a layer of additional clothing on whatever you wear to bed to prevent feeling an instant shiver.

Do I have tremors?

Another possibility is that you might have essential tremor, a nervous system disorder that causes involuntary and rhythmic shaking.

It can affect any body part, but it mostly affects a person’s hands. If you fail to treat it on time, it can become worse and lead to a situation where it becomes severe. It’s common in people aged 40 and older.

Some factors can make it more pronounced, and that includes:

Sometimes, essential tremors could also be confused with Parkinson’s Disease, but the two differ in important ways.

Why is my body shaking for no reason?

Sometimes, our body could be shaking involuntarily due to underlying neurological conditions, such as stroke, Parkinson’s Disease, or multiple sclerosis.

It could also be a side effect of a medication, another symptom of anxiety, fatigue, or stimulant use.

There could be plenty of reasons why it happens. So if you see it happening frequently, it’s best to seek professional consultation from a doctor.

Can anxiety cause excessive yawning?

Excessive yawning could be one of the signs of anxiety.

Since anxiety affects the heart, respiratory system, and energy levels, it can cause breathlessness, yawning, and feelings of stress.

Someone who suffers from a lot of anxiety will often excessively yawn. But a stressful yawn is more intense and prolonged than a sleepy yawn.

Body shaking could actually be tremors that a person is experiencing. It usually happens in middle-aged people and can be embarrassing if it’s pretty apparent.

If not taken care of at an early stage, it could reach a stage where a person’s normal day-to-day activities are affected by tremors.

Is my body shaking from anxiety?

Anxiety could also lead to shaking of one’s body. It happens as the heart rate, breathing, and blood pressure increase during anxiety as your body prepares itself to deal with the cause of anxiety.

So your body and brain interpret anxiety as a signal to escape danger or stand the ground, and this leads muscles to act, leading to shaking.