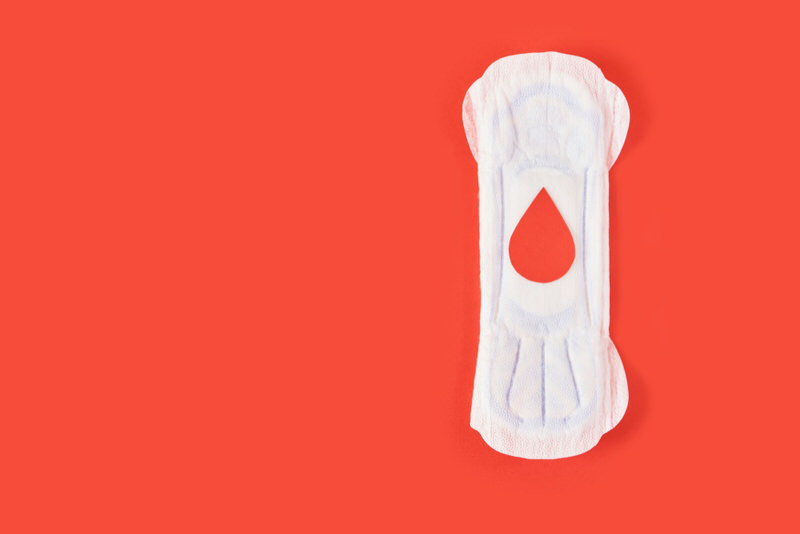 If your period blood appears orange-colored, it could signify vaginal discharge, infection, implantation spotting, or end of periods. While these are possible issues, if you notice other symptoms and signs along with experiencing orange blood, then it’s best to get a proper examination done. Different tests can determine your actual health issue, which can later be treated correctly. Sometimes, you might even see black, pink, or dark brown period color, each having a different interpretation of your current health.

If your period blood is not looking the typical bright red color, it’s a clear indication of some issue or problem that your body is going through, and you haven’t been able to pay attention to it. It all greatly depends on your cycle and what is typical for you. Not everyone experiences the same bright red color as period blood.

But then, what is an abnormal color? Is everyone’s definition of normal is different? People might experience dark brown, dark red, and even bright red during menstruation as typical colors.

What should you do if you see some other color, such as orange? Let’s understand the reasons behind an orange period and things you can do to rectify that!

Before jumping into the unknown territory of why you might be experiencing orange period blood, let’s understand and familiarize ourselves with what we already know.

According to the American Academy of Obstetricians and Gynecologists, your period blood color and texture is influenced by hormonal change and health condition. You might see various colors throughout your life, such as dark brown, bright red, dark red, pink, black, and even orange.

While bright red is often the color most people experience and is considered healthy, you might even get to see dark brown blood or dark red. Bright red is an indication of fresh blood that is generally encountered when the period starts.

As your period days go by, you might see changes in the manner of the same blood, changing colors to dark red and then brown. Dark red implies that the blood has been sitting for a while now in the uterus, while dark brown is an indication of oxidized blood and is a sign of old blood.

What does orange blood signify?

Orange is an unusual color to see when you’re menstruating. It’s not normal to see such color, and it could imply several things if you do see it.

One common reason for noticing this orange blood is because sometimes when you’re menstruating, your blood can carry out other cervical fluids that get mixed into the period blood while coming out.

This fluid, when mixed along with period blood, can create an orangish color to the blood. It’s not entirely orange but more like you’ll see an orange tint somewhere there.

Another possible reason for seeing orange period blood could be an indication from your body that you have some infection you weren’t aware of. Often it can be a sign of bacterial vaginosis or trichomoniasis.

Try to notice if you have some other symptoms along with seeing orange period blood, such as foul smell, itching, irritation, or general discomfort. These signs can signal other infections as part of the problem, like urinary tract infection (UTI).

Sometimes, a person might experience spotting or vaginal bleeding during pregnancy in the very early days. Some people report or see orange-colored blood around 10 to 14 days after conception.

Not every person getting pregnant might see such a sign as it doesn’t happen to each of them, but some might. It’s not a 5-to-7-day menstrual period but more like spots where you see orange color.

So, you can suspect pregnancy and get a test done to ensure this is the reason behind such color.

Sometimes, when you’re nearing the end of your periods, you might notice your period blood changing color to a darker red or brown color.

It’s entirely normal. It’s the last of the blood that’s being let out. It has been sitting in the uterus for the longest and by now has oxidized.

Similar is the case with the orange color of your periods. Towards the end, you might see even orange as a possible color.

Your flow is slowing down by this time, and the color can change to orange due to the oxidization.

What can be done about orange blood?

There are always solutions as it does with this particular issue. As mentioned earlier, it could just be a sign of your periods ending, as sometimes our period blood color changes when our periods are ending.

While you notice the orange tint in your blood just now, you also need to carefully see if you have other signs or symptoms which could hint towards different kinds of infections like a urinary tract infection.

Or it could be a sign of bacterial vaginosis infection that you ignored before. In this case, it’s necessary to see your gynecologist for proper treatment.

Another sign could be that it’s a kind of spot which people get when they’re in the early stages of conceiving a baby. Do a pregnancy test if you notice other changes and feel this could be a reason for this particular color.

If things still don’t become clear, then leave it to professionals. Instead of thinking and worrying too much, visit your gynecologist, and they can better assist you regarding this particular orange blood color.

In abnormal periods, which includes seeing an orange color, it’s never a bad idea to take a professional opinion.

It’s something that your doctor might do if they suspect something is wrong. They might perform a few tests to see where the problem lies and tend to it accordingly.

What does period blood color mean?

Orange is not the only unusual period blood color that people might experience, but other colors are also surprising.

Like black blood can appear during the beginning or end of the period. This color signifies that blood has been sitting for a while now in the uterus, and it took longer than it usually does for it to come out. It’s just a step forward to dark brown color.

It’s alright to experience black color once, but it might indicate blockage inside the vagina if you see it repeatedly.

Other possible symptoms include foul smell, fever, difficulty in urinating, and itching or swelling in the surrounding area.

Similar to orange color, this might appear when the period blood is mixed with cervical fluid. But other reasons might be due to using birth control pills.

These reduce the estrogen level in the body, making the flow lighter and a chance for you to witness a pinkish hue.

There are other health issues such as anemia, significant weight loss, and an unhealthy diet which also increases the chances of seeing pink.

Seeing a different color than your usual period blood color can be a bit alarming.

There’s no need to worry if it happens once, but if it becomes a pattern, you should book an appointment and see the doctor.

What color of blood is healthy?

Usually, the blood pumped directly from the heart is oxygen-rich and is bright red. Once the blood circulates throughout the body, the blood grows darker in color and appears to have a maroon tint.

So, the blood returning to the heart is often darker in color. In a rare case, your blood can appear green which is a condition called sulfhaemoglobinaemia.

What is my blood so dark when drawn?

When our blood has oxygen in it, then it appears to be more bright red. Then the color appears bright red because oxygen binds to hemoglobin in the blood cell. It doesn’t bind the blood cells when blood is drawn, and due to this, it might appear dark red.

What does it mean if your blood is green?

Sulfhemoglobinemia is a rare condition that makes the blood appear green. It happens when the blood is exposed to sulfur-containing compounds.

It affects our hemoglobin, and blood cells carrying oxygen get affected, making the blood appear green. Being aware of the medications one takes is essential to avoid being affected by this condition.

Different vaginal discharge colors can have various interpretations. A pale yellow discharge is normal for people to experience, and it means you’re healthy.

But if you see gray discharge, that might mean you have some infection. A pink discharge could indicate a small tear in the vagina and a mixing of vaginal fluids.

Usually, the color of the blood is supposed to be either bright red or dark red. The same goes for the period blood. But sometimes, when a person is menstruating, they might notice a different color which seems quite unusual to them.

However weird it might be, there are valid reasons for the change in blood color. For example, if you see an orange tint in your blood, this might indicate an issue in your current health and medical conditions, which need to be looked into.

It’s important to notice all the signs and symptoms (if any) during your menstrual cycle and take care of your vaginal health before it turns into something severe.