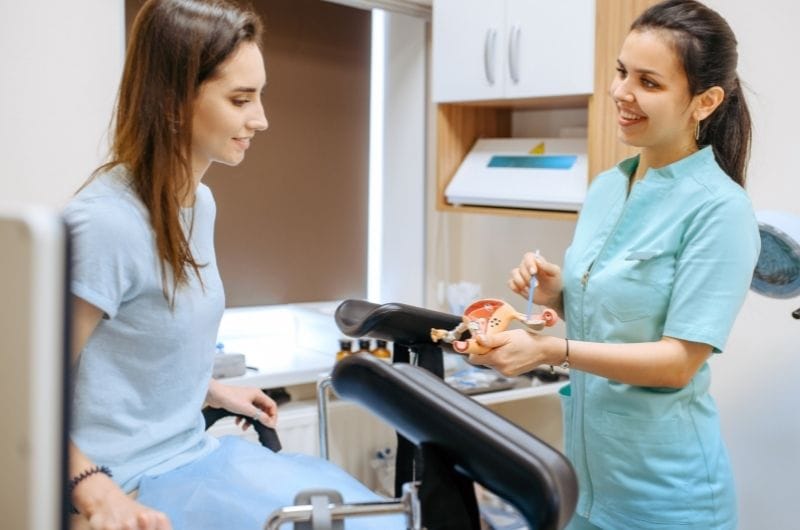 Decidual bleeding happens during the first trimester of pregnancy and may bring the timing and symptoms common to normal menses. Additionally, decidual bleeding does not deter the early signs of pregnancy. Some of the main causes of decidual may be hormonal changes, ectopic pregnancy, abortion, miscarriage, and hormonal contraceptives, among others.

Some pregnant women may continue to experience bleeding like normal menstruation, even in timing even after fertilization and conception.

The bleeding, in most cases, happens during the first trimester, which covers the first three months of their pregnancy.

It may also bear a close resemblance to another type of bleeding known as implantation bleeding, which happens when the fertilized egg is implanted on the uterine wall.

Even though decidual bleeding may be confused with normal menstruation, if you are pregnant, it will neither deter nor affect the usual signs of early pregnancy like fatigue, frequent urination, and nausea.

The hormonal changes that happen in the early stages of pregnancy may most likely cause decidual bleeding.

Due to the practical purpose of its occurrence, decidual bleeding portends virtually no threat to the health and life of both mother and fetus.

Nevertheless, you must treat any form of bleeding in a pregnant woman with a healthy dose of concern.

You must visit a doctor to ensure that the bleeding does not forebode future miscarriage or any prospects of complications like ectopic pregnancies.

Just like normal menstruation, decidual bleeding may come with symptoms like bleeding, spotting, abdominal pain, and even menstrual cramps.

The most notable and recorded causes of decidual bleeding may be hormonal changes, ectopic pregnancies, miscarriages, abortion, and hormonal contraceptives, among other possible causes.

We’ll discuss such reasons in our next part. Even when experiencing decidual bleeding, it may be wise to have a pregnancy test to make sure you do not rule out pregnancy and even settle for the bleeding as part of your normal menstrual cycle.

The body of a pregnant woman undergoes hormonal changes.

Her body experiences a gradual rise in the hormones estrogen and progesterone, which are supposed to orchestrate bodily and behavioral changes necessary for pregnancy bearing.

You may notice enlarged breasts that may also grow tender. Some women also glow on their skin and even showcase notable mood swings.

The same hormones responsible for such superficial changes may also cause unseen changes like the thickening of the uterine wall.

The thickening o the uterine wall does not augur well with pregnancy. Therefore, at some point, the extra lining must be shed off.

The shedding of that extra lining is what eventually manifests as decidual bleeding and coincidentally happens at around the same time as your menstruation would have had you not conceived.

Ectopic pregnancy happens a fertilized egg implants in the wall of the fallopian tube other than in the hollow of the uterus.

Such may occur due to some physical mal-formation, genetic issues, genetic effects, or possibly some other unknown causes.

Like in normal pregnancy, you will experience the same pregnancy signs whether your pregnancy is normal or ectopic.

However, when you have an ectopic pregnancy, excessive bleeding and spotting are one of the symptoms.

The difficulty in distinguishing normal decidual bleeding and one from an ectopic pregnancy could precisely be the reason anyone must get immediate medical attention in the event of any bleeding during the first trimester of pregnancy.

Whether an embryo or fetus, you willfully and knowingly terminate a pregnancy, regardless of reasons or underlying circumstances; that is abortion.

But when such an expulsion happens without your input whatsoever, then can be referred to as a miscarriage.

Miscarriage happens to be a problem that many women have to deal with, some for more than one time.

But on the other hand, abortion cuts as a globally controversial topic discussed across social, religious, and political platforms.

Abortion and miscarriage come along with bleeding and must also be dealt with immediately to avoid an escalation of the bleeding or any other possible complication.

First, they may increase the level of the hormones estrogen and progestin. With such hormones high, the ovaries get hindered from releasing any egg. Without an egg, any sperm will have nothing to fertilize.

Second, the high hormone levels may orchestrate the creation of thick and sticky cervical mucus, making it very hard for any sperm to go through to the uterus and bring about fertilization.

However efficiently hormonal contraceptives work to hinder conception, they may have a side effect of spotting and bleeding between consecutive menstrual periods.

There is some possibility of such bleeding continuing even after the contraceptives are laid aside during pregnancy.

Decidual bleeding does not essentially mean that you may be having a miscarriage.

Even though each may entail some bleeding, only a medical opinion and diagnosis can clarify between the two and avoid undue panic or even complacency.

How do you recognize decidual bleeding?

Decidual bleeding is notable when it happens in the first trimester of pregnancy.

But, at the same time, you may also experience the normal early signs of pregnancy like nausea, enlarged breasts, and glowing skin.

No matter how far along they are in their pregnancy, bleeding for pregnant women may be a precursor for possible future complications or even life-threatening situations for both mother and fetus.

Secondly, the idea of whether or not you have a pregnancy should by no means be based on experiencing blood or any other sign but should be arrived upon through a proper pregnancy test and no less.