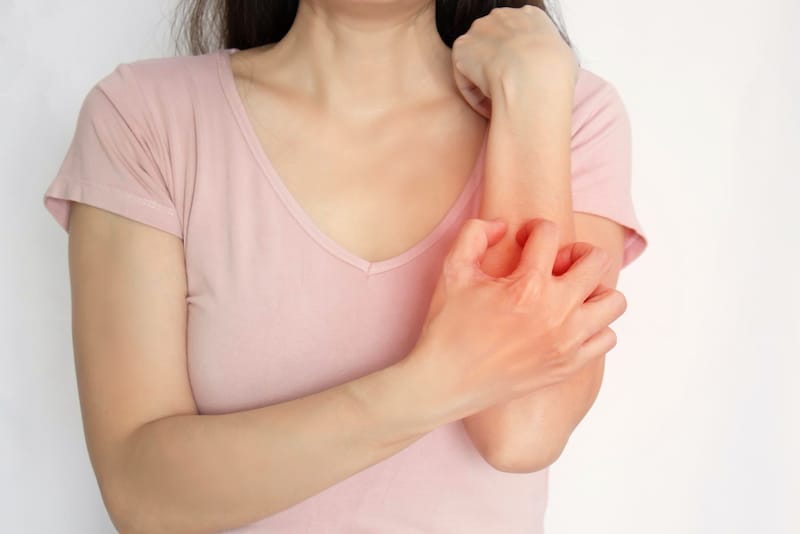 Every circular red rash isn’t ringworm but can be other skin or medical conditions. It could be confused with skin conditions like eczema, psoriasis, granuloma annulare, Lyme disease, or pityriasis rosea. It could also be contact dermatitis, where certain things cause the skin to flare up. An autoimmune disease like lupus also shows a similar flare which could be initially mistaken for ringworm. The treatment depends on a proper diagnosis based on different signs. Most treatment involves taking medications, applying ointments, and following a series of self-care treatments at home.

Ringworm is a fungal infection of the skin caused by a fungus that typically forms a ring on the body part of the person affected.

Since this is its typical identifying feature, it’s common for people to mistake other conditions with ringworm.

But many skin conditions are pretty similar to ringworm and might resemble its symptoms too but aren’t ringworm.

That’s where you need to pay attention to the causes, treatments, and risk factors to determine if it could be something different.

What are ringworm symptoms?

Before diving into skin conditions similar to ringworm, knowing a bit about ringworm symptoms is best, and it will help us understand how to differentiate it from other skin conditions.

It’s caused by fungus and can appear on different body parts.

Depending on the body part that’s affected, the appearance of this ringworm might change.

Ringworms thrive in the damp areas of skin and are found to be affecting animals too, and they can spread from person to person or animal to person.

This fungal skin infection goes away after following the prescribed medications like antifungal creams.

Eczema (atopic dermatitis) and ringworm are two different skin conditions that might resemble each other due to their similar appearance.

Both are itchy and appear circular on the affected person’s skin but are actually quite different conditions.

Eczema has symptoms including dry skin, rough or scaly patches of skin, swelling, and crusting or oozing.

But the most prevalent symptom is that nummular eczema has multiple patches, while ringworm usually has one spot.

Also, the rings aren’t defined in eczema and aren’t donut shaped as ringworm.

Ringworm is a fungal infection and thrives on damp skin, but the cause behind eczema is unknown, except it tends to develop after an injury to the skin like a scrape or a cut.

According to the American Academy of Dermatology, it has several other risk factors, but it’s most common in men ages 55 to 65 and women in their teen or young adult years.

Psoriasis might also resemble ringworm as it’s another skin condition. It might appear so because it causes discolored patches on the skin with itching and scaling.

Sometimes with small isolated plaques, psoriasis can be confused with ringworm.

But plaque psoriasis is a disorder caused due to immune dysfunction that produces inflammatory plaques on the skin. So the cells pile up because your body produces cells too quickly, making visible patches on the skin.

One way to differentiate psoriasis from ringworm is that psoriasis lesions are usually larger, involve more areas of the skin, and occur at distinct locations on the skin. They also don’t have a clearing in the middle as ringworm do.

Some risk factors that can trigger psoriasis include hormonal changes, excessive alcohol intake, stress or anxiety, injuries to the skin, infections, or certain medications.

A person affected by this rare skin condition can end up resembling ringworm due to how it looks.

Though it’s circle-like ringworm, the inside of the circle remains a solid color and becomes raised, which ends up looking like a bump.

It can appear in different colors, and the rash isn’t painful or itchy as ringworm.

Granuloma annulare may be caused by injury to the skin like a bug bite, taking specific medications, viral infections, or certain health issues.

Because of its itchy symptoms and red appearance, it’s another skin condition often confused with ringworm.

The symptoms can seem pretty similar, too, with dry, scaly skin, cracked skin, swelling or tenderness, and bumps or blisters.

But contact dermatitis is caused when a person’s body reacts to a chemical, skincare product, or detergent.

The affected person could also be allergic to certain metals, causing this skin condition to develop or simply from using dish soap.

Lyme disease rash is similar to a ringworm rash because both are circular in appearance, but a bite from a black-legged tick causes this rash.

People getting this bacterial infection will start seeing the signs like burning, itching, feeling hot to touch, and a rash appearing within the first week.

If left untreated for long, the affected person goes through severe pain and swelling in joints, numbness in the hands or feet, and heart or even brain damage.

When a rash from Pityriasis rosea first appears, it can be easily confused with a ringworm rash because they look pretty similar, but it soon spreads on, becoming more like larger blotches of rash all over the skin.

This common skin condition starts as a round or oval-shaped rash that is slightly raised and has similar symptoms as itching, but there are flu-like symptoms too.

Is it lupus or ringworm?

Lupus is an inflammatory disease that causes a rash to form on the body and, in an initial form, can resemble a ringworm rash.

But there’s no itching, unlike in the case of ringworm. A person with lupus experiences fatigue, joint weakness, and flu-like symptoms.

The risk factors include exposure to sunlight, stress, excess work, lack of sleep, infection, or injury.

While ringworm is a skin condition caused by a fungus, lupus is an autoimmune disease that even affects a person’s organs and systems.

Symptoms differ from mild to severe depending on the type of lupus.

What are my treatment options for rashes?

Treatment options depend on the cause of the red rash on the skin.

It could be any medical condition, and proper treatment can only be received when you visit your doctor and let them know about your symptoms.

The diagnosis may differ depending on the kind of rash, how long it has lasted, and its appearance.

You may be told to follow a series of self-care treatments followed by taking the right medication or avoiding certain things causing the rash to appear in the first place.

It’s best not to treat this skin rash on your own and visit your dermatologist when you first start seeing the signs.

A delayed visit can cause more harm by causing the condition to become severe.

Sometimes, when you see an immediate reaction of rashes accompanied by other signs, it could also be an intense allergic reaction, so it’s best to visit a doctor if you’re having trouble breathing or see the rash spreading too quickly.

How do you tell if a rash is fungal or bacterial?

Skin infections caused by bacteria are usually red, hot to touch, and swollen with a tender rash, maybe with pus.

If there’s a fungal infection, the signs are redness, scaliness, and itchiness with occasional bumps.

Lupus is an autoimmune disease that causes rashes to appear on the body.

Inflammation of the skin is a pretty common sign of this condition. There’re different forms of lupus, and the signs may differ depending on different forms. But they’re discolored, scaly, and thick in nature.

What is a red rash that isn’t itchy?

If it’s not itchy, it could be a health issue that can be diagnosed after looking at various signs and symptoms attached to it.

But it could also be blood spots that are red and round, and these are caused by tiny blood vessels called capillaries bursting under the skin.

They’re flat to touch and can be mistaken for a rash but isn’t itchy at all and are caused by various reasons.

Different reasons could cause different skin rashes, but they could also be cancerous.

Sometimes a rash is just a rash, but it can develop and grow into a cancerous one where it grows larger and becomes shinier over time.

An indentation might form in the center, where it may begin to ooze or bleed.

If you see a rash developing, don’t delay visiting a dermatologist because even if it isn’t a cancerous one, it can become severe and cause more trouble later.

Every circular rash isn’t a sign of ringworm; it could be a sign of other skin conditions or health issues. It mainly depends on the kind of signs and symptoms you’re experiencing.

Based on that, your dermatologist might decide on a proper diagnosis and let you know what kind of treatment would be best for you to follow.

These rashes in the initial stage could also be mistaken for others, so there’s a possibility it’s not an accurate diagnosis. If your condition doesn’t become better by the stipulated deadline, you should go for another diagnosis.