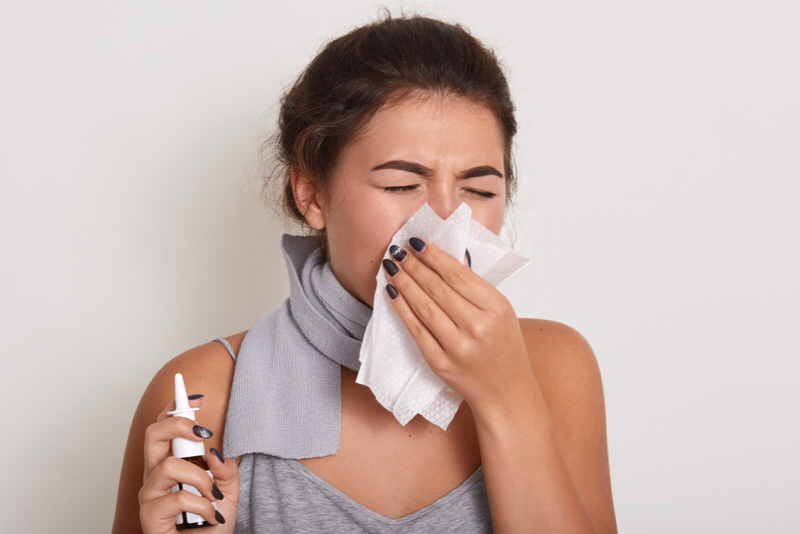 If you feel pressure in your eye when blowing your nose, then you could be suffering from a rare clinical event called orbital emphysema. It’s when a forceful injection of air occurs into the orbital soft tissue spaces. Mostly occurring amongst patients with a history of trauma and fracture of an orbital bone, permitting air entry. Other causes reported are infection, pulmonary barotrauma, injury from compressed-air hoses, and complications from surgery. Most cases resolve on their own, but antibiotics or surgery is done depending on the severity of the issue.

Blowing your nose seems to be the most logical thing to do when one falls sick. Especially during the flu season, when many people seem to fall ill, sneezing and blowing one’s nose is common.

But what if blowing your nose own time makes the air come out of your eyes? Indeed, that isn’t common and can only be deemed a warning sign of an impending issue.

If you’re experiencing a puff of air escaping through your tear ducts, then you should know that’s a rare thing to happen. If it does, then it’s a rare clinical event known as orbital emphysema that you must learn about. Let’s take a look at what could be causing this rare issue.

What is orbital emphysema?

As described above, orbital emphysema is a rare clinical event. It can be described as a collection of air within the orbits or eyelids.

Although most commonly occurring because of a history of a fracture and trauma of an orbital bone, there could be other causes.

Other reports have mentioned causes such as sneezing, airplane travel, and Boerhaave’s syndrome.

Fracture and trauma as causes

When talking about experiencing orbital emphysema, fracture and trauma are the leading issues that cause it. There are specific places where a person witnesses fracture, and trauma can lead to air force through one’s eyes.

These fractures typically occur at the thinnest portions of the orbital wall, including the medial or inferior orbital wall, permitting air entry from the ethmoid and maxillary sinuses, respectively.

Fracture leading to pressure in eye

Understanding the mechanism behind how your eye feels pressured when blowing a nose can be understood more thoroughly in this section.

Take the example of a child. They have more flexible bones of the orbit that are less prone to fracture and shatter. But if they fracture, they act as a trap door, resulting in a higher incidence of muscle entrapment following orbital wall fractures.

This air is trapped in the preorbital spaces when the orbital soft tissue acts like a ball valve, presses back the fracture fragment, or herniates into the sinus cavity.

Complications of pressure in eye

When facing pressure in your eye caused by the air trapped inside, there are certain complications you might be faced with. Based on the severity of the issue, you might not meet with difficulties right away or maybe face them later.

Since it’s a rare clinical issue, not much has been done to diagnose this issue properly.

But CT has been found effective in identifying air’s presence and anatomical location when orbital emphysema is suspected.

There is a wide range of attenuation of wood on CT ranging from air density to soft tissue/fluid density, which depends upon the type of wood and how much fluid it has absorbed after entering the tissue. A careful study of the history of the patient is required for making a correct diagnosis.

For a long time, radiography was used as a standard practice for diagnosing and detecting fractures and trauma. Still, it has a high false-negative rate (50%) and a non-diagnostic rate (30%), limiting its utility.

Treatment for pressure in eye

Most cases of orbital emphysema resolve spontaneously, and no such treatment is needed.

Experts generally recommend prophylactic oral antibiotics to treat sinus pathogens for patients with orbital fractures into a sinus. A 23-gauge needle can be used for direct needle drainage for rapid release of pressure and air.

Usually, it’s most common amongst people who have suffered a fracture on the nose and trauma before, so a history of your medical records should be made available to your doctor. Experts require a thorough study to avoid further complications like infection and pressure.

Can you hurt your eye by blowing your nose?

Blowing your nose is always a very sensitive issue, as you can blow it too hard sometimes.

People find the cold and the mucus irritating, thus putting too much effort into blowing their noses, but it can cause harm in many ways. So, one needs to be careful when blowing their nose and do it gently. Just remove the excess mucus.

When you’re sick and think of blowing your nose, you need to be careful. Blowing your nose too hard can cause the mucus to shoot up into your sinuses instead of out of your nose. This happens as a lot of pressure is built up when blowing the nose.

Is there a connection between your eyes and nose?

Your eyes and nose are connected by the nasolacrimal apparatus, not visible from the outside.

This drainage system carries tears from the ocular surface to the nose and ultimately to the gastrointestinal tract. But if one is injured can reverse the liquid mechanism coming from the opposite end.

How do you know you have an orbital fracture?

The symptoms are pretty visible:

– Blurry vision
– Black and blue bruises around the eyes
– Swelling of the area surrounding the nose
– Swollen eye
– Numbness in the surrounding area
– Blood in the white part of the eye
– Difficulty in looking left, right, up, or down
– Flattened cheek

Can orbital fractures heal on their own?

While some fractures are minor and can heal on their own, you might require surgery depending on the severity. Your doctor will discuss the best course of action with you after assessing your situation.

When you blow your nose and witness pressure in your eyes, which also means a puff of air from your eyes or air trapped in between, it’s called orbital emphysema. Caused by multiple reasons, a history of fracture and trauma is the most significant cause. But other factors such as sneezing, blowing your nose too hard, surgery complications can also cause this to occur.

Depending on your clinical history and various other factors, your doctor will diagnose your condition and formulate a treatment plan for you. While sometimes it can improve on its own, depending on how severe the issue is, your doctor might also suggest surgery.