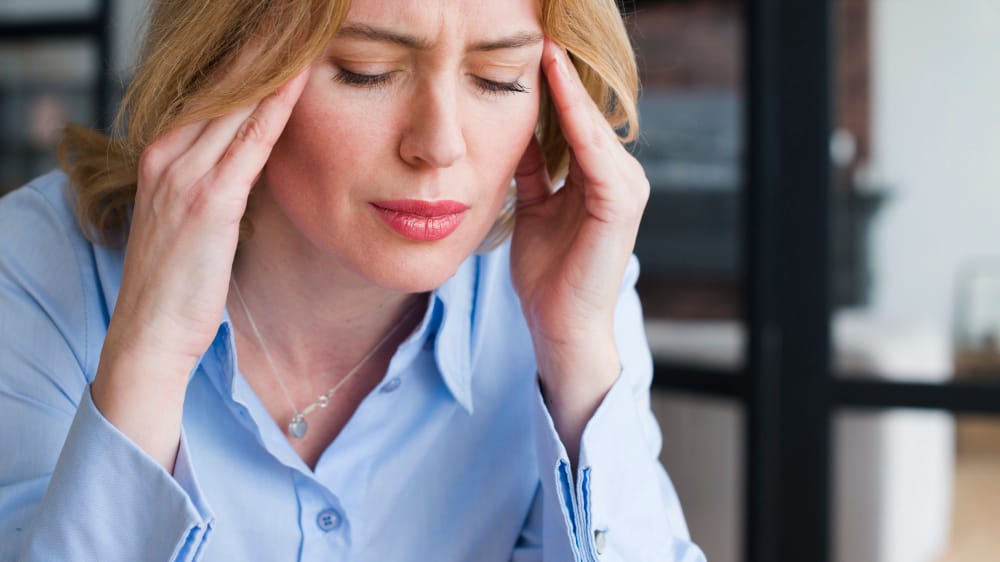 A popping sound in the head followed by a warm sensation could signify a brain aneurysm. There’re other signs as well, such as a mean headache, stiff neck, blurry or double vision, droopy face, nausea or vomiting, seizure, or loss of consciousness. An aneurysm could be unruptured, leaking, or ruptured. It’s the leaking aneurysm where there’s blood leakage into the brain. Unfortunately, an aneurysm can’t be detected or diagnosed as it doesn’t show symptoms but can be found when one experiences it or detected in tests for other medical conditions. Surgery and using a flow diverter are ways to treat it. It’s best to reduce the risk factors by making lifestyle changes.

Have a sudden feeling of something popping in your head? So, you wait and check to see if you accidentally hit your head or did something fall around you. But then suddenly there’s this warm sensation in your head, and you wonder to yourself what could it be?

If you think you’ve time to leave things and just go about your day, you couldn’t be more wrong.

Popping sound in the head is a big deal that can lead to serious consequences if you don’t pay immediate attention to it.

What could be so urgent that you need to visit a hospital immediately? Are there other symptoms to watch out for? Let’s take a look.

This popping feeling in the head followed by a warm sensation could be a symptom of medical issues known as a brain aneurysm.

It’s a deformity of an artery where a spot in the arterial wall in the brain bulges and fills with blood.

To put it plainly, it looks like a berry attached to a vine.

You think there will be signs to showcase you’re going to have an aneurysm, but this medical condition is unpredictable.

There’re no signs or symptoms and not to scare you, but you and people around you could be walking around with this deformity as you read this.

There’re different kinds of aneurysms, and each has its own signs to watch out for and things to do when they take place.

These are small and mostly don’t show signs of being present in someone.

Unruptured brain aneurysm symptoms are caused in 10-15% of people affected by it.

A splitting headache is one of the most prominent symptoms which occurs instantly when one has an aneurysm.

It’s quite severe and can also be termed as a thunderclap headache.

If you notice any of these symptoms apart from popping and warm sensation feeling in your head, you need immediate medical attention.

Remember that warm feeling in the head?

That’s the release of a small amount of blood into the brain. In such cases, when there’s a warm sensation, a person might experience a severe headache known as sentinel headache.

Sometimes the blood vessel doesn’t pop entirely but only partially. In such cases, the warning sign is a sentinel headache.

If you experience it, then you’re just days or weeks away from a complete brain aneurysm. Before anything severe occurs, it’s vital to seek immediate medical care.

This is the worst kind of situation a person could be in.

You have a tiny window when you start experiencing these symptoms from a ruptured brain aneurysm.

At this point, it’s an emergency that, if immediately not taken care of, can result in a stroke, brain damage, and even death.

The reasons behind a brain aneurysm being formed may vary but what’s clear is how it happens.

There’s a structural change in the walls of an artery in the brain, resulting in these arteries getting weaker and thin and creating deformity.

Sometimes inflammation or trauma can cause the deformation too without thinning.

A combination of the following issues might cause the brain aneurysm to form in the first place:

Other causes for brain aneurysm include:

The riskiness of brain aneurysm

You must wonder what the risk factors which trigger a brain aneurysm are? After all, there must be cases that trigger it.

We know its increased size increases the risk factor of an aneurysm, and certain medical conditions or bad habits are also responsible for it.

But there’re other things one does in their daily routine such as:

Diagnosis and treatment of brain aneurysm

An aneurysm doesn’t show any signs or symptoms until it ruptures, and then you have to be rushed to the hospital immediately.

Diagnosing it is impossible, but in certain, it can be detected, such as when you’re getting tested for other health conditions.

When treating aneurysms, it depends on the location and size of it, age, overall health, personal and family medical history, and if it has ruptured or not.

Ways to avoid an aneurysm

By now, you have to terms that an aneurysm can happen at any time, but since it’s not easy to diagnose or detect, there’s pretty much nothing you can do about it.

But looking at risk, which might increase its chances, reveals that making some adjustments in one’s diet and lifestyle might significantly bring this risk down.

It can’t harm to try some of these lifestyle changes such as:

When you can’t see a medical condition with serious consequences, you cannot cope with the sudden consequences.

According to Brain Aneurysm Foundation, about 6.5 million people in the US have brain aneurysms that haven’t ruptured.

As I mentioned, there’s a small chance of you facing this consequence, but when you’ll do, you will need immediate medical care.

There’re several ways to treat it, but even the recovery takes time, including physical, occupational, or speech therapy for the patient who suffered from it.

It depends on the severity of the issue.

Can you hear a brain aneurysm pop?

An aneurysm might not make a loud popping noise, and some people might not even hear anything.

But popping sound is linked to the occurrence of a brain aneurysm that has ruptured or is exerting pressure on the brain tissues responsible for auditory sensory processing.

Can you feel a brain bleed?

In some cases, after a popping sound, one might feel a warm sensation in their head and wonder if this is known as brain bleeding.

A leaking aneurysm is when bleeding occurs in the brain, so seeking immediate medical help is necessary.

Can you have a brain hemorrhage and not know it?

A brain hemorrhage comes without warning and could happen for many reasons, such as falling from a few steps down the stairs.

Something similar is the medical condition known as a brain aneurysm, where the arteries thin out to form a bulge that can rupture anytime, causing bleeding in the brain.

Experiencing a popping sound followed by a warm sensation isn’t something normal that you experience every day.

It becomes more important to know what it could mean, and one explanation of it comes down to experiencing a brain aneurysm.

The main issue is how unrecognizable an aneurysm can be, and the only way to identify it is to go through it or detect it in tests for other health conditions.

However, you can reduce its risk by minimizing the factors responsible for it and changing your lifestyle habits.

A leaking aneurysm is where one might experience a warm sensation, and this kind of aneurysm requires immediate medical care.

Immediately rush to the hospital if you suspect any other symptoms after popping sound and warm sensation.