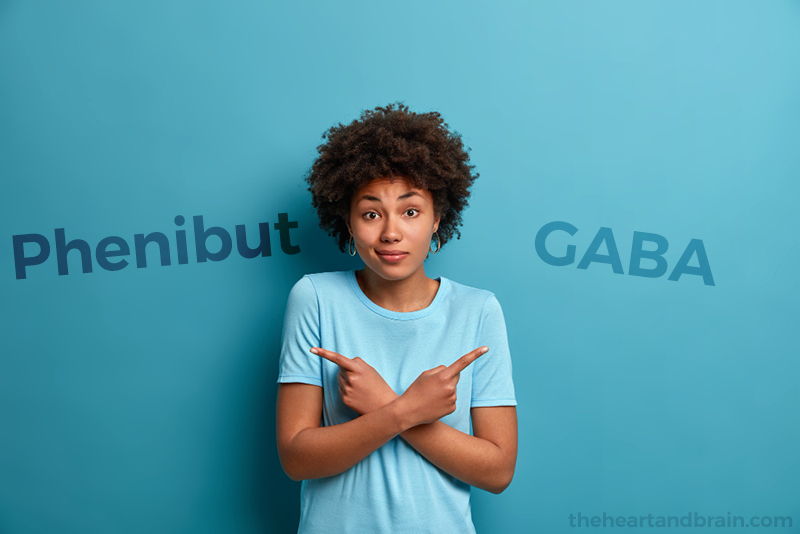 If you’ve ever been diagnosed with anxiety, insomnia, or even depression, you’ve probably heard of Phenibut and Gaba. Both these drugs are very good at what they do, which is reducing anxiety, nervousness and replacing it with a calm feeling. And they’re both readily available via the internet, just a few clicks away, as a matter of fact. Both Phenibut and Gaba seem to be the perfect solution to enhance your mood.

But have you ever wondered how these drugs work? How does Phenibut almost magically alter your mood? Is there any difference between it and Gaba? What about any side effects? If it’s that good, is there a chance that you might get addicted to it?

GABA is a neurotransmitter that blocks nerve impulses inside your brain. It’s naturally found in your body, unlike Phenibut, which is a drug that is very similar to GABA. Phenibut has a stronger effect, while this same effect can lead to addiction if taken carelessly. Phenibut also can be quite risky if the dosage is exceeded. Considering both GABA and Phenibut, it is best to let your doctor recommend which drug can be taken as a supplement.

GABA is an abbreviation for Gamma-aminobutyric acid. GABA is the neurotransmitter that blocks nerve impulses in your brain. GABA is naturally found in your body and boosts your mood, and gives an overall calm feeling. GABA, being very similar to Phenibut, reduces anxiety, reduces insomnia, and helps with ADHD.

While GABA is found naturally in your body, this too can be taken as a supplement. It’s also very surprising, but you cannot find GABA inside any food you can eat.

Once GABA blocks the impulses within your brain, a calming effect is created in your brain. This explains the benefits that GABA has to reduce the impact of restless disorders and bring peace. And while studies have been conducted on the effectiveness and side effects of GABA, the data still leaves more to desire.

Phenibut is a neuropsychotropic (medicine that deals with mental disorders) drug first discovered in Russia in 1963. This drug can be bought over the counter in many countries including the US, UK, and Australia. Scientifically, Phenibut is a Gamma-aminobutyric acid (GABA) agonist.

Since its discovery, Phenibut has been used in Russia to treat insomnia, depression, stuttering, irregular heartbeats, and even PTSD. Looking at the list of disorders that Phenibut is prescribed for, we can see that it should have a very calming effect.

Due to this, Phenibut has become very popular as something to take when you’re feeling down or when you need to sleep. Phenibut does this by blocking specific brain signals. This, in turn, reduces the activity in your nervous system. Phenibut then attaches itself to a specific protein in your brain, creating a calm or, at times, a very happy effect.

The effects of Phenibut last for about 7 hours on average and take about an hour to take effect.

The problem with Phenibut

If you read the above section, you might think that having something that could make you happy and relaxed whenever you eat it; might be addictive. And you’re right!

While Phenibut isn’t exactly addictive, this drug has recently been put into the spotlight. It isn’t expensive, and you don’t need a prescription to buy it. It’s cheap, and it’s available online; it can calm you down, it can make you happy. All of this put together makes it a perfect combination to be abused or misused, especially since Phenibut is unregulated.

There have been cases where teenagers and young adults turned to Phenibut to cope with exam stress, work pressure, and at times even as a fitness supplement. Using Phenibut had grown from a situational drug to a daily habit like your cup of coffee.

The only difference is that doing so will lead to withdrawal symptoms when they do try to stop. Several studies have confirmed that if you take it for too long or too much, your body begins to physically crave Phenibut for up to 2 weeks after stopping.

In the case of addiction, it’s recommended that you don’t immediately stop taking the drug but gradually reduce the dosage over a few weeks. This gives your brain time to adjust to the neurotransmission to return to its previous state. Various patients have reported very severe withdrawal symptoms ranging from nausea to hallucinations.

Phenibut has also been noted to have some side effects in high dosages, which are listed below.

But of course, we can’t ignore the upside. The reason for this drug’s popularity is because it works. And while it can be addictive, it rarely is.

Phenibut vs GABA: The comparison

The below table shows the key differences between GABA and Phenibut.

Looking at the above table, we can see that GABA is a clear winner considering both Phenibut and GABA. However, the impact of Phenibut can be much stronger and more effective if managed carefully and wisely.

There is also no recommended dosage for either to be taken. While some sources recommend taking 250 to 300mg three times daily, this would have to be discussed with your doctor or physician. Taking either of these drugs would be much safer and more effective after a discussion with your doctor. This makes sure that the doctor is aware of any other medications and can recommend your dosage for either.

GABA is deemed safer, less effective, FDA regulated, harder to find, and more expensive. Phenibut has a stronger effect but can be more addictive because of this. It is cheaper and easier to get.

So which one should you take? Honestly, we shouldn’t decide. And neither should you. The decision to take either of these drugs can be life-changing. Make sure you consult your doctor because many factors, such as your condition and your existing medication, can come into play. After all, they do know best.