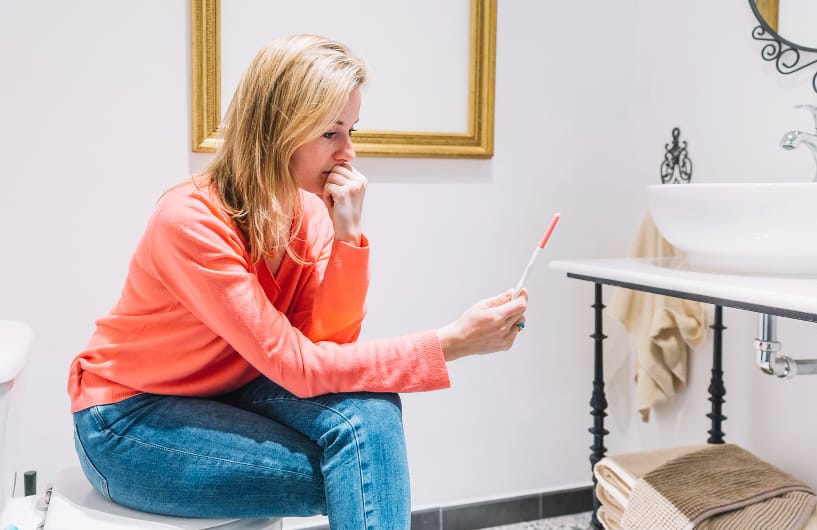 Every pregnancy test comes with a time window for checking the result, which lasts for 10 minutes. After this window is gone, the urine starts to dry up, changing the test result, and an evaporation line appears, which can be mistaken for a positive line. An evaporation line will always be colorless, unlike a positive line, which will either be completely dark in color or have a slight hue of color. Once used, a pregnancy test becomes useless after the 10-minute window. It’s rare to get a false negative if you haven’t waited long enough into your pregnancy to take the test. It’s also possible if you took the test at a random time instead of taking it with the first-morning pee.

Taking a pregnancy test at home can be nerve-wracking for several reasons. But if a negative pregnancy test later turns out to be positive, it might cause panic.

With different types of tests available in the market, it can be challenging to know which is the best and how to read it. If you miss out on instruction, it could change the result too.

But if you got a clear negative in the first place even though you followed all the instructions, why does it show a positive hours later? Is the test false? Or is there a chance you could be pregnant?

Before you evaluate your results, it’s essential to know that following the test’s instructions will give the most accurate result.

A pregnancy test majorly depends on the timing, which needs to be right. The best time to take the pregnancy test is after you’ve missed your period.

Another factor is the time of the day when taking the test.

You can achieve a more accurate result when you take the test in the morning just after waking up. It’s because the first-morning urine is the most concentrated in the day.

This concentration is vital in detecting the hCG hormone. This hormone begins to release when a fertilized egg implants in the uterus and occurs about six days after conception.

The level of this hormone also keeps increasing with each passing day.

You want to take the test after you miss your periods to make sure hCG levels are high enough to be detected by the stick.

To ensure there’s no other issue with the result, try to get a more sensitive test to detect the pregnancy.

But there’re cases where getting a less sensitive test might be better. It’s when you have hCG in your system from a recent birth or miscarriage or fertility drugs.

Why does a negative pregnancy test turn positive?

Looking at the test when you’re done taking it, you can see it’s negative, but later in the day, you glance at the same stick and see it has magically turned positive.

Anyone would question their own eyes and judgment if they saw this happening. But there’s a reason why the negative has turned into a positive.

When you buy any pregnancy test, it has rules to follow, and as long as you follow them, you will get the correct result.

One such rule is checking the result in the given time frame.

There’s a time window ranging from a couple to ten minutes where you should see your result. This is the accurate result of the test you took.

Waiting beyond this time frame will provide you with false results. Be it several hours later, a couple of hours, or even half an hour, your result won’t be accurate and dependable anymore.

What is an evaporation line?

It’s best to go over what’s an evap line to clear all the confusion about how a negative pregnancy test can turn positive after several hours.

The evaporation line is a slight line that appears where the positive line is supposed to show. If you just glance, it might seem like a positive, but it’s not. Upon looking closely, you’ll notice it’s colorless.

It appears when the urine starts drying on the test as the chemical composition of the urine sample changes due to evaporation.

There are three factors you have to remember when differentiating an evaporation line from a positive:

A positive line can only appear on the test even if very faint if the test result is checked within the given period and follows factors such as:

If you see a negative test by following all the rules to reach the most accurate result, that’s a valid result.

A negative turned positive after several hours is not a correct result and shouldn’t be believed.

What are the chances of a false negative?

There could be a false negative result even though you’re actually pregnant if you don’t wait long enough into your cycle to test.

The same result can also be seen if you do the testing during any time of the day.

The diluted pee doesn’t have a good concentration of hCG to be measured. You should always test with the first-morning pee to get a more accurate result.

Why do I see a faint line on a pregnancy test?

Several parameters must be followed when testing to reach the most accurate result possible. But sometimes, when we don’t follow these rules, it can mess up the result in various ways.

After testing, when you look for the result and notice only a faint test line, it could be due to various reasons:

– If you faced a chemical pregnancy, you could have mistaken it for regular periods.
– You didn’t get a high sensitivity test, which can affect the result from adequately showing.
– Testing too early in the cycle can also affect the result and produce a faint line.
– When you take the test at any time during the day, your pee is diluted, which doesn’t detect the hCG hormone.

Can letting a pregnancy test sit cause a false positive?

To get the most accurate result on a pregnancy test, you have to follow the set of instructions, and when you don’t, the result might differ.

If you let the test sit, the result will change. There’s a time window to check the result; when you don’t, the test result is no longer accurate.

In a pregnancy test, the control window should always appear with a specific dyed color within the next 10 minutes.

The test is also invalid even if there’s a line in the test window but no line in the control window.

You should take a new test within the next few days, as the invalid test can’t be used anymore.

Do indent lines show up immediately?

The indent lines will only appear if you took the test incorrectly or waited too long to check the results.

After the time window has passed, the result dries up, and the test becomes useless as it doesn’t show an accurate result anymore.

What does it mean when one pregnancy test is positive and the other is negative the same day?

If you get a positive test result followed by a negative the same day, it could happen if you’re using two different brands of pregnancy tests.

A pregnancy test has a sensitivity level, and one might be more sensitive than others, which can change the test result.

Also, the most accurate reading can be achieved when you do it with the first-morning urine as it’s more concentrated with the hCG level. The later in the day you take the test, the more diluted your urine will be and change the test result.

Other reasons could be that you took an expired pregnancy test kit, drank a lot of fluids before taking your first test, or misused the test.

It could also be an early pregnancy loss in some cases. Early loss can be heartbreaking, and you should consult a doctor to deal with it.

When you see your negative pregnancy test turning positive after several hours, the first thought should be to disregard this result as it’s not accurate.

Each test comes with a specific time frame for results, after which the urine starts to dry and changes the test result. An evaporation line that appeared can be confused for a positive line and allude you into thinking it’s a positive.

If you followed all the instructions properly before the test, the first result seen within the time frame is more accurate.

Still, if you have doubts, you can always do other tests after a few days or visit an OB/GYN to get a blood test done.