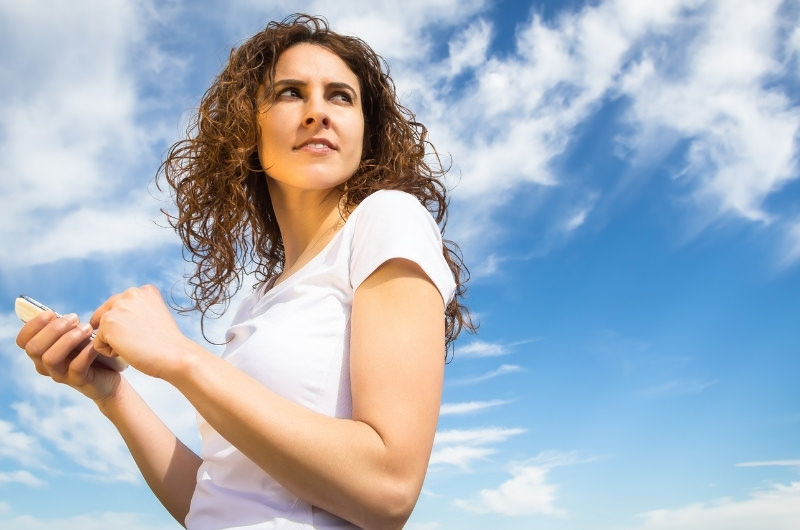 When you look at the sky, you see millions of tiny dots in your vision, a psychological phenomenon called Scheerer’s phenomenon or blue field entoptic phenomenon. These dots appear in the central field view within 10 to 15 degrees from the fixation point and appear like bright dots. The dots are the result of white blood cells moving along the capillaries in front of the retina. Easily visible on the monochromatic blue background of the sky, these tiny dots are harmless.

It’s a pretty common thing to experience when you suddenly look somewhere and notice tiny dots in your vision that appear randomly. It usually doesn’t signify any vision problems and needs for any eye correction LASIK or cataract surgery.

If you start to wonder what these dots are and why they appear suddenly, this is known as the blue field entoptic phenomenon or Scheerer’s phenomenon.

You might describe them as seeing stars. Let’s dive deep into why these suddenly appear in your vision and what these tiny dots signify.

Scheerer’s phenomenon can be described as a psychological phenomenon that takes place in the retina. You see tiny bright dots in your vision along with squiggly lines.

This usually happens when looking at the sky for some time. They appear like an animation of some sort moving all the time and don’t seem real.

If you suddenly look at the ground, these dots will disappear but comes again soon when you look at the sky.

Depending on person to person, it might be tiny circular bright stars like dots or even squiggly lines, like worms. If you focus on one dot, it might stop moving, but others around it move constantly.

These dots appear in the central field view within 10 to 15 degrees from the fixation point. You might see a combination of dots and squiggly lines.

One eye might see dots and the other squiggly lines, and it sorts of becomes a pattern of both.

Sky and millions of dots in vision

It’s relatively visible in the sky because of the monochromatic blue background.

The dots and squiggly lines you see are easily visible on this background because they are small and white, and the ends of these worms might be slightly grey or black.

One cannot see these dots in their vision, but only if asked to pay attention to it. While for some, it’s quickly and reasonably easy to notice such dots.

The reason why you see millions of tiny dots in vision

Your brain automatically filters out the shadowing lines of these capillaries. They are then further filtered out partially by dark adaptation of the photoreceptors lying beneath the capillaries.

The white blood cells, which are much rarer than the red ones and don’t absorb blue light, create gaps in the blood column, appearing as bright dots.

Eye floaters are specks that are also seen in your field of vision. But these are created when small clumps form in the clear jelly-like substance inside the eyeball. Eye floaters are suspended in this jelly, so they move when your eyeball moves.

But don’t you confuse these bright dots with “floaters.”

If your eyes stop moving, then the dots keep moving around, but with “floaters” in your eye, if the eye stops moving, they settle down. This occurs since floaters are in liquid form and get trapped in the vitreous humor.

This movement is subject to inertia. With the dots, when your eye moves, the dots follow because they are contained in the retina, not the vitreous humor, and so do not have the appearance of inertia.

Yes, it’s a common phenomenon when you see tiny dots in your vision. It usually happens when you look at the sky.

Still, it’s totally normal as blood flows to your eyes through capillaries that pass over the retina (the tissue at the back of your eye that acts as a receptor for all night).

It’s when you see tiny dots in your vision caused by white blood cells coursing through the tiny capillaries on the retina’s surface.

The cells are nearly the width of those capillaries, so they cause a little bit of traffic jams. The red blood cells pile up behind them, and a clear plasma space builds up in front of them.

Why do I sometimes see tiny moving dots?

What you might be seeing in your vision could be tiny moving shiny dots, which is called Scheerer’s phenomenon.

You could also be seeing “floaters” in your vision, formed when small clumps form in the clear vitreous humor inside the eyeball. Both of these are different things that might appear in your vision.

Whenever you look at the blue sky, if you focus, you can easily see these tiny dots appearing in your field of vision. If you try to focus on it, they might move around a lot.

These are not an indication of any health issue. This is something that appears in your field of vision when looking at the sky.

These will quickly disappear when you look at the ground. It’s completely harmless, and you shouldn’t be worried about it. The “floaters” are different compared to these tiny millions of dots that appear in your vision.

You don’t need any help to make these go, but it’s sort of playful to see these dots as they seem like an animation.