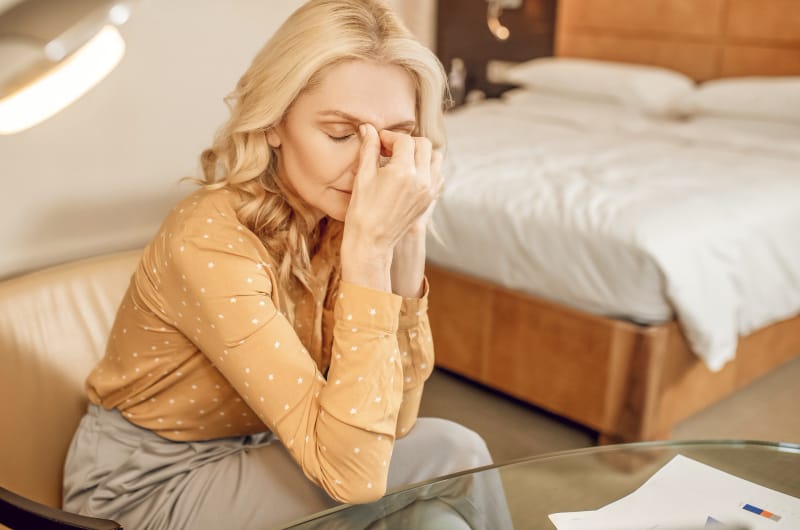 The hormonal imbalance caused by varying estrogen levels may be the leading factor of most of the symptoms you may have to go through during your peri-menopause. The list of the symptoms includes changes in the sense of smell, insomnia, metallic taste on your tongue, and memory loss, among many others.

Women are not made to be fertile throughout their adult life. Most women have a small window of fertility that lasts between their first menstruation and their last menstruation.

That time could be somewhere between their early teens and their late forties or early fifties, approximately thirty years of productivity.

During ovulation, the ovaries produce a viable egg that could lead to impregnation if fertilized by a sperm.

However, if not fertilization does not happen, then that egg and the uterine wall are shed off and released through the vagina, a process known as menstruation.

The ovaries are set to produce a limited number of eggs in a woman’s life, and when that number gets depleted, the period of infertility known as menopause starts.

In addition, the ovaries produce eggs and a range of feminine hormones like estrogen, whose productivity may be significantly reduced once menopause starts.

Menopause, like any other age-related complication, comes along with many symptoms, some of which may be a bit confusing.

However, the substantial change in estrogen levels may create a hormonal imbalance which in most cases becomes the cause of most if not all of the symptoms mentioned earlier.

Some of the symptoms, as mentioned, may include smelling smoke where there is none.

But, whatever symptoms, they tend to be more confusing during the transitional period from fertility to menopause, where menstrual cycles are irregular and erratic.

That transitional period, also known as peri-menopause, ends twelve months after the last menstruation when menopause sets in.

There are many symptoms that we may experience during menopause or the time leading to it.

Menopause symptoms you may expect

1. Changes to the sense of smell (smelling smoke)

When your body begins to produce less and less estrogen every day,  that may affect some of your senses, such as smell.

That change in the sense of smell may make it so acute that you begin to notice smells that you used to ignore earlier.

You may also begin to hate some smells and favor others without any reason.

This is precisely why most women experiencing menopause symptoms may change their choice of perfume or stop using fragrances altogether.

The other fact that may affect your sense of smell is that once your estrogen levels drop, the resultant hormonal imbalance may trick your body that you are going through a hot flash.

When that happens, your body may produce sweat in preparation to reverse the hot flash and cool your body.

Sweatiness can eventually lead to body odor which may be the smoky smell lingering in your nostrils.

Most women going through this inevitable phase of their lives may be advised to take frequent showers, wear light and maybe use some deodorants.

A drop in estrogen can affect the functionality of many organs; for instance, thermoregulation may be affected.

When that happens, hot flashes and sweating may cause many people discomfort. Most people find it hard to sleep when uncomfortable.

That inability to sleep, also known as insomnia, can be reversed by making sure you keep your temperature level well regulated. For instance, you can use a fan or air conditioner to cool your bedroom.

You can also reduce the amount of water you take before bedtime to reduce the effect on your sleep cycle that may be disturbed when you wake up to go to the bathroom.

You can also try to go to bed at precisely the same time to set a routine for your body to adjust.

3. Metallic taste on your tongue

Like pregnant women, women going through menopause transition may begin to feel an irritating metallic taste in their tongues, affecting how different foods may taste.

The resultant effect would be a change in food preferences which may, in turn, affect their weight and health.

Once again, hormonal imbalance due to varying estrogen levels is the only culprit for such weird feelings.

In addition, the imbalance affects your taste buds and thus the metallic taste.

Eventually, you may get used to the metallic taste, which wears off over time.

During your transitional period to menopause, you may find it hard to remember some things in the past or near future.

Even worse, your discretion and decision-making may seem somewhat clouded. Do not panic that you may be falling into dementia.

Just like in the previous symptoms, hormonal imbalance causes the loss of mental capabilities.

The other probable cause for your inability to remember or decide may be caused by insomnia we mentioned before. Our brains do not function as they should when fatigued.

Women going through memory loss may be advised to opt for hormonal therapy and institute some sleep routines to enable their bodies enough rest.

The only star lining to this scary symptom is that you will most likely regain your full mental capabilities post-menopause.

5. Other symptoms of the menopause transition

Besides the significant symptoms of menopause we have discussed, there are many others we may only have to mention.

However, they are all caused by hormonal imbalance due to changes in estrogen levels.

They include; dry mouth, dental problems, reduced breast fullness, brittle fingernails, thinning hair, and dry, itchy skin, among many others.

Can covid-19 make you smell things that are not there?

Covid-19 may most likely cause you to lose or reduce your sense of smell than smell things that are not there.

When you begin getting the tell-tale signs that you may be transitioning to menopause, you need not panic.

Such a transition and the symptoms thereof may be as expected in any woman’s life as life and death to any other mortal being.

There may be ways to go around, treat and even endure the symptoms. Most importantly, you will eventually pull through.