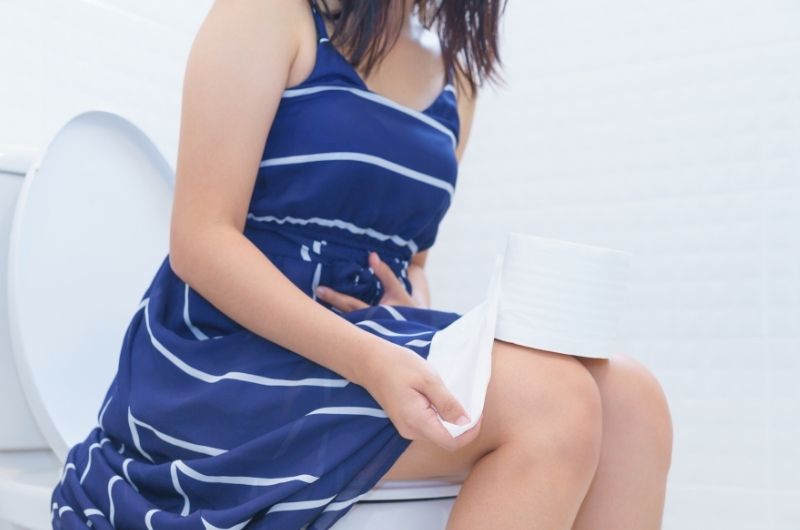 During periods, one might experience light bleeding where the color changes to light red, especially towards the end. During this time, one experiences spotting, so blood may mix with cervical fluids and appear as pink discharge. Usually, it’s nothing to worry about, and it’s normal for the color to change. But if there’re other signs, it could also be a potential infection, hormone fluctuation, early pregnancy, switching birth control, ovarian cyst, uterine fibroids, perimenopause, or lochia. In addition, the pink discharge could be a potential sign of cervical cancer in rare cases.

Periods are often a challenging time for women.

Not only are you physically uncomfortable, but your mood swings make it even more difficult for those 5-8 days.

And just when you think you’re finished with this month’s adventure, but you see pink discharge, you’re bound to believe something is wrong.

Period blood can be different colors during various stages in one’s life, and you might see dark red, brown, pink, bright red, and various other colors during your periods and discharge.

Depending on the situation, it could be normal or a sign to worry, which means it’s time to see the doctor.

The pink discharge might be considered normal towards the end of the period, but it could also signify some other issue.

It’s vital to determine the reason to see if you should wait and watch or visit the doctor!

The ideal color of discharge

We’re all familiar that white discharge is a sign of a healthy body.

So, when we experience any other color, we panic and wonder about all possible things that could have gone wrong.

While pink discharge isn’t the ideal color, it doesn’t mean that things are bad either.

Bright red isn’t the only color one sees during their menstrual bleeding. While there’re some heavy days, there’re some light days of periods, so color change is normal to witness during this time.

Different people experience different periods, and your periods may vary from one month to another. Depending on the consistency and flow, a change in color such as bright red, dark red, and pink is expected.

Usually, the color is quite dark and leans towards brown in the beginning. But as days go by, you might see a color shift from brown blood to bright red.

As your periods are nearing an end, the color may turn pinkish due to light flow.

There might be spotting on panties during this time, or you may use panty liners as the flow has now trickled down to a few drops, so pinkish discharge or a light red color is common.

But that’s not the only reason why you might see pink discharge. There’re several other possible reasons, so let’s take a look at them in the next section!

Commonly termed as having light periods, it could be one reason why you’re seeing pink discharge.

It’s common to experience this if one goes through light bleeding.

A normal menstrual cycle takes 24-38 days, and a period lasts up to 8 days.

So light and irregular periods won’t be the same as normal ones.

It could be due to various reasons that are perfectly understandable or treatable, such as breastfeeding, aging, PCOS, overexercising, or stress.

2. Blame it on the hormones

Hormones are a tricky little thing that can cause various issues in your body, accompanied by mood swings when imbalanced.

While physically they might cause you pimples, increased growth hair, weight loss, or gain, it also affects your periods and menstrual cycle.

Low estrogen levels might lead to pink discharge at different points in the cycle.

The role of estrogen is to stabilize the uterine lining. But without enough of this hormone, the lining might break down and shed irregularly.

This can lead to spotting, and as a result, you might see pink discharge.

It’s essential to take note of other symptoms and signs to recognize hormone fluctuation:

Women often might not even know they’re pregnant unless they notice they missed their periods.

They might not witness any other signs or symptoms of early pregnancy, so it can take a few weeks to notice they might be pregnant.

But some women go through various signs; one of them is seeing pink discharge or light bleeding.

This happens during implantation and happens 10-14 days after conception.

Some other related symptoms include:

As I mentioned before, a change in hormones is responsible for various changes in the body, and it can also be impacted by switching your birth control.

And one of the side effects of this imbalance is witnessing pink discharge, also known as breakthrough bleeding.

It might be because the new contraception doesn’t have enough estrogen.

An ovarian cyst is a fluid-filled pocket or sack that develops on one of the ovaries.

Some cysts like follicular cysts are created if the egg doesn’t burst from the ovary at ovulation and continues to grow.

Then there’re cysts like dermoid or cystadenomas that grow large and cause spotting or pink discharge to occur.

These cysts can be a part of the menstrual cycle and are usually nothing to be worried about. However, if you notice pain or heaviness in the abdomen, you should get it checked out.

Any change in the color of your discharge can be an indication of an impending cervical infection that you haven’t figured out yet.

Although most infections aren’t something to be worried about and can be treated by taking normal care, it’s a reason to worry if severe symptoms and signs accompany it.

Diseases such as gonorrhea, chlamydia, and other sexually transmitted infections (STIs) may cause unusual discharge, including pink discharge or fluid.

Some other symptoms include:

It’s best to get yourself checked with a gynecologist to determine if the infection is the issue causing this change in discharge.

Before you wonder what a fibroid is, let me tell you it’s not as bad as it sounds.

It’s a noncancerous tissue growth around the uterus, and they don’t also show signs of being present.

But when they do, one might suffer from abnormal vaginal bleeding accompanied by light bleeding in between or spotting.

In such cases, the discharge may appear pink in color.

Menopause is a common term, and we know it brings a lot of challenges for many women but not all. And then there’s a term known as perimenopause which is labeled a transition period to menopause.

Even this isn’t experienced by all women but those who do experience varied symptoms.

One of these symptoms is obviously experiencing pink discharge or spotting or irregular periods, so you might want to be ready or on the lookout for other signs as well to recognize if perimenopause is the cause.

It depends when this stage of transition might start for you, and so if there’re these other signs present, you don’t want to ignore them, for you might need help from your doctor to make things easier for you.

Lochia or the periods you get after birth can also leave you with pink discharge.

After the delivery, the periods women get are heavy and mostly is dark red or blood clot, which is normal to a certain extent.

After a few days, when the excess goes out, the vaginal bleeding will lighten, and it’s during this time you might experience pink color in period or discharge.

It’s normal for the color to change, and it might take some time for the discharge to look normal again, and the same goes for the menstrual cycle.

In some rare cases seeing pink discharge could also be a potential sign of recognizing cervical cancer. Though not common, there’re signs to watch out for.

The most common signs could include bleeding after sex, between regular menstrual periods, or after menopause and usually heavy bleeding.

The discharge is often white, clear, and watery in the early stage, but mixing with blood could also turn its color pink.

Reach out to your healthcare provider for further diagnosis of the issue.

Why is my period coming out light pink?

Sometimes, the blood thins out towards the end of the period causing usually light bleeding.

Towards the end of the vaginal bleeding, blood can get mixed with the cervical fluid and appear as a pink discharge.

Usually, it’s no big deal and not much to worry about.

It’s also a sign of pregnancy and, in rare cases, could be a sign of ectopic pregnancy. It’s when the embryo gets implanted in the fallopian tube.

Ectopic pregnancy could be life-threatening, so it’s better to see a doctor as soon as possible. If you experience other symptoms, it could indicate other issues.

Light pink spotting between menstrual periods is sometimes due to ovulation or the release of an egg from the ovaries.

The egg bursting from the ovary can cause pain and some bleeding. So you can witness pink spotting along with some pain.

When there’s pink spotting due to ovulation, blood is mixed with cervical mucus.

How can I stop pink discharge?

Depending on the cause of pink discharge, the treatment options may also vary.

But usually, one experiences this color of discharge towards the end of their periods when they go through light bleeding, which is considered normal unless accompanied by other signs.

The best thing to do is to make sure you don’t indulge in sexual activities, wear loose-fitting clothes, change to cotton underwear, stay hydrated, and don’t use anything to clean the area other than normal water.

If the infection causes it, stop indulging in sexual activities, for you might experience pain during sex.

The rest depends on the symptoms you feel, so treatment can only be given after a proper diagnosis.

Experiencing light pink discharge towards the end of the period isn’t something to be worried about.

Usually, towards the end, one goes through a phase of light bleeding where the color changes to light red.

You could also experience spotting, so blood might mix with cervical fluids appearing as pink discharge.

You should be fine unless there’re other signs or symptoms along with it.

Focussing on these signs can let you narrow down your issue, get it diagnosed, and treat it accordingly.

Usually, it’s not something that can be treated, but in rare cases, the pink-colored discharge could also be a potential sign of cervical cancer!