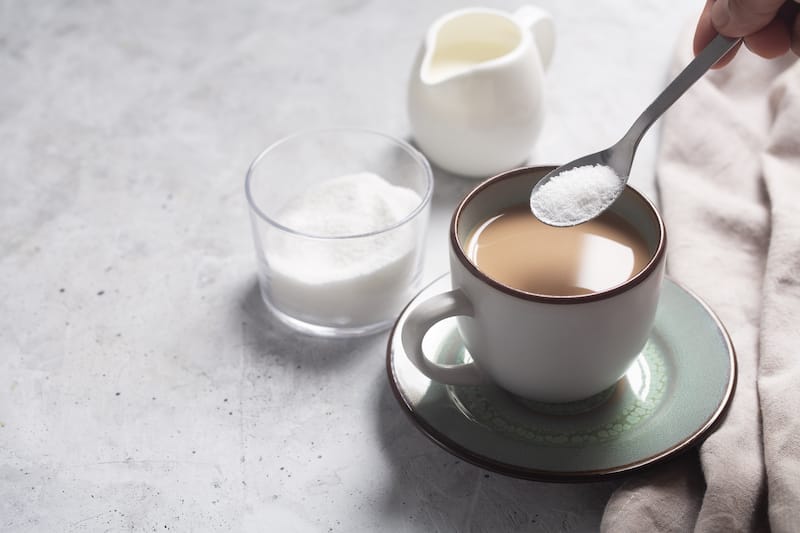 Sorbitol is a good sugar substitute because it is lower in calories than sugar. It’s also what makes it slower to be absorbed by the body. Once consumed, it takes a bit longer to get it out of your system. It can be problematic for people who are intolerant or allergic to sorbitol, which can cause them to suffer from gas, bloating, and pain in the abdomen area. One needs to be careful of the food and beverages they’re consuming, for most items have artificial sweeteners as an ingredient. Even a small amount for those with issues of intolerance and allergy can be harmful. Sorbitol is also laxative in nature, so if you have a weak digestive system, don’t consume a lot of it or avoid it altogether.

Sorbitol is an artificial sweetener, also known as a sugar alcohol, commonly found in some fruits, and it’s also commercially manufactured and used in many food products and beverages.

With the similar sweetness of sugar, it proves to be beneficial in several ways.

It helps digestion, preserves oral health, and is helpful for someone suffering from diabetes or looking to avoid processed sugar.

So, how different is it from processed sugar? Does it take longer to digest and get out of your system? Can an excess of sorbitol be bad for your health?

As an artificial sweetener, it’s used for several reasons in food items and beverages because of its number of benefits.

How long does sorbitol stay in your system?

There are different ways to consume sorbitol, and it could be consumed either by eating some natural fruits or by eating manufactured foods and beverages.

When eaten in regular quantity, it’s not fully digested by your small intestine. The remaining sorbitol that isn’t absorbed moves to the large intestine, where it’s fermented or broken down by bacteria.

To understand, let’s explain it with a more detailed description, the body breaks down sorbitol with an enzyme called sorbitol dehydrogenase, and it converts sorbitol to fructose, a simple sugar.

Your liver then converts fructose into glucose, glycogen stores, lactate, and carbon dioxide.

Everyone’s familiar with glucose because it’s a commonly known sugar and is also simple for our body providing us instant energy.

On the other hand, glycogen is complex because its made of many glucose molecules chained together.

This digestion of sorbitol is slower than sugar, making it a fewer calorie favorite and helping people and companies market their products.

Reasons you want sorbitol out of your system

Consuming sorbitol in average quantities won’t harm you, but having it in large amounts might.

It can cause bloating, diarrhea, gas, and abdominal pain in some people, especially if you suddenly consume a lot or after a long time.

You could be intolerant to it without realizing it, and intaking as much as 10 grams can cause this effect.

These symptoms could also indicate irritable bowel syndrome because they have trouble absorbing sorbitol.

The symptoms can be defined as extremely painful enough to ruin your day. People also suffer from mental symptoms and even fatigue.

In such cases, sorbitol isn’t absorbed in the intestines worsening the situation of a person with IBS and could lead to flaring up.

In such cases, people need to take special care, and even if consumed in small quantities, it can cause disruption in their daily lives.

Severe side effects of sorbitol on the digestive system

The side effects appear to be not so common but most often, what’s reported is the laxative effect of sorbitol.

While it’s good for occasional constipation, one shouldn’t take it frequently and should be taken when facing real issues with your digestion.

Some laxatives can be habit-forming and shouldn’t be used for a long time, but thankfully sorbitol is considered a less risky, non-stimulative laxative.

If you have an issue with your digestion, you should be careful with the ingredients of the food products you consume.

Those that can be consumed more than 50 grams of sorbitol daily have also mentioned that “excess consumption may have a laxative effect” by the FDA itself.

Sorbitol could also interact with calcium or sodium polystyrene sulfonate, which is used to treat high potassium levels in the blood, and this can cause intestinal tissue death.

Noticing your digestive system issues are being caused due to sorbitol means you should become more careful in what you’re consuming and things that should be avoided.

Contact your healthcare provider if you face extreme discomfort in any mentioned symptoms.

How do I get rid of sorbitol?

You can’t get sorbitol out of your system any faster, and it does take more time than regular sugar to be digested and absorbed by the body.

You can only become aware that sorbitol is causing the current discomfort and choose what to have in your diet carefully next time.

How do I get rid of bloating and gas caused by sorbitol?

– Walk around for 20 minutes.
– Try some simple yoga poses. There are poses to help your food digest and pass gas or reduce bloating.
– Try massaging your lower abdomen.
– Drink plenty of water.
– Take a warm bath.
– Try apple cider vinegar.

How fast does sorbitol cause diarrhea?

An hour or two after consuming sorbitol, one might start seeing the effects of sorbitol on their digestive system in the form of diarrhea.

Someone with a more sensitive digestive system might experience a faster side effect.

Sorbitol works as a laxative, so one needs to be careful of the quantity they’re intaking, especially if they have a weak digestive system.

What food and drinks contain sorbitol?

Food items have ingredients where sorbitol must be mentioned or its sweetener name with E number 420.

You can identify by this number that it could be sorbitol.

Is sorbitol worse than sugar?

Sorbitol is a sugar alcohol that is better than sugar with many health benefits.

From being a lower calorie artificial sweetener to being something that also works as a laxative for those with digestive issues.

It’s also suitable for people who have diabetes as this artificial sweetener and good for your oral health.

Sorbitol is about 60 percent as sweet as sugar and has about 35 percent fewer calories per gram with 2.6 calories than 4 calories for sugar.

Who should not take sorbitol?

Those who’re allergic and intolerant to sorbitol shouldn’t be taking it into their diet. Even the smallest of doses can end up causing huge discomfort such as gas or bloating.

If you’re on some medications, you shouldn’t take sorbitol unsupervised if you’re looking to get it to help you with your constipation.

As a sugar alcohol, Sorbitol has plenty of health benefits, making it a popular ingredient in foods with relative sweetness of sugar and making it a part of a healthy diet.

The popular benefit remains that of being low in calories compared to processed sugar. It takes a lot of time to be absorbed by the body, which automatically makes it something that would take time in your body once consumed.

If you are looking to get sorbitol out of the digestive system because of intolerance or being allergic to it, you need to wait until it gets out naturally.

Many people are sensitive to this artificial sweetener, so they need to be extra careful with the ingredients of an item.