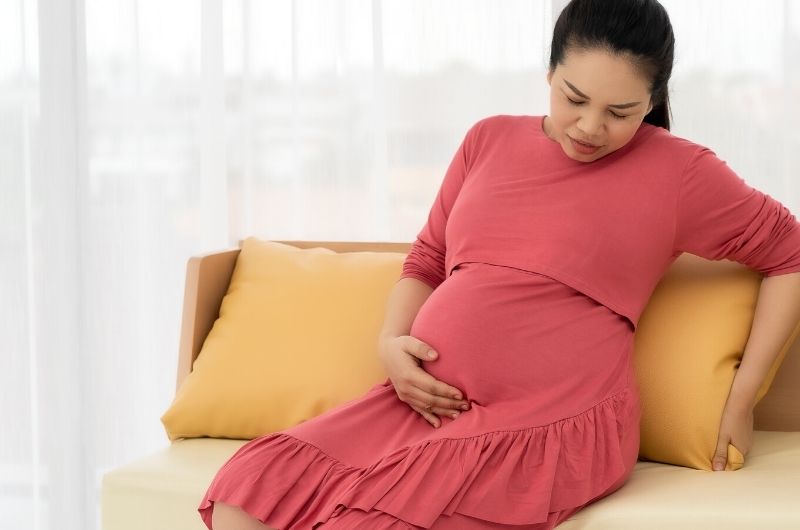 Some causes for the gurgling sound could be from movement of the amniotic fluid, movement of the fetus, relaxing of pelvis joints, and gastrointestinal issues, among others. Therefore, it’s not something you should immediately worry about.

As much as being pregnant may bring the prospect of a much-desired aspect of productivity in human existence, it may also have its fair share of challenges and difficulties.

Some pregnancies may be trivial and easily assumed, while others may portend possible danger to both mother and fetus and require immediate or even emergency medical attention.

During the first and second trimesters, you may have all the emotional and mood swings combined with other physical symptoms such as feeling weak, nausea, vomiting, and discomfort, among many other signs.

Even so, your abdomen is still not fully distended, and it may take up to the third trimester for that to happen.

Many pregnant women have complained that some pretty weird things may happen once they have entered the third trimester of their pregnancy.

Some complain of feeling gurgling or popping sounds in their stomach. Others may not feel the gurgling because not all pregnancies behave similarly.

Several factors may cause the gurgling sounds. It could be movements of the amniotic fluid within your womb that generates the sounds.

Sometimes, it could be caused by the direction of the fetus in your stomach. It could also be movements of joints, muscles, and ligaments in your pelvic.

Braxton hicks contractions and gastrointestinal problems in your gut can also cause them.

Sounds may be little cause for alarm, but when it comes to pain or extreme discomfort, you should seek medical attention.

Our article will discuss the reasons for such gurgling sounds in detail. In the discussions, we may also mention a thing or two you could do to alleviate or make the problem much more reliable.

Causes of gurgling sound in 3rd trimester of pregnancy

Just as we all know, the fetus always stays in a fluid-filled sac known as the amniotic sac.

By the time you are in your third trimester, your abdomen happens to be greatly distended, and the amniotic sac must by then contain enough amniotic fluid to sustain the almost fully developed fetus.

Changes in your body posture, whether standing, sitting, or sleeping, may cause some shifts in the positioning of your abdomen.

Such shifts may cause the amniotic fluid to flow around and may cause some gurgling sounds.

2. Movement of the fetus

By the time pregnancy reaches the third trimester, the fetus happens to be greatly developed.

So developed it is that it can sleep, wake, open, and close its mouth. Its kicks and limb movements also become highly notable. Also, it becomes hyperactive and hyper-flexible.

The fetus also becomes sensitive to external stimuli. For example, a touch to the distended abdomen and even sound can elicit some activity from the fetus. It can also react to the moods and emotions of its mother.

With the stomach so distended and internal organs so closely packed together, any disturbing movement from within would likely cause some gurgling or even popping sounds.

Even so, these fetus movements may be considered a very vital sign of the fetus’s well-being and health.

So important it must be that if you don’t feel your fetus move for a whole day, you should seek medical attention.

During the third trimester, the woman’s body prepares for child delivery.

First, the body produces a hormone known as relaxin.

Next, the hormone relaxin causes the ligaments and bones in the pelvic girdle.

The gurgling or popping sounds you hear may be muscle spasms and changes in joints and ligaments in your pelvis.

Like in previous cases, such sounds should be no cause for alarm unless they are accompanied by pain or severe discomfort.

The hormones produced during pregnancy may bring along many gastrointestinal issues.

Some of the gastrointestinal problems related to pregnancy include nausea and vomiting, diarrhea, heartburn, and constipation.

Some of the named gastrointestinal complications like nausea and vomiting may cease after the first or second trimester. However, others, like constipation and heartburn, may persist into the third trimester.

Such GI issues may cause gases in the stomach that, combined with the little space in the stomach, can cause many sounds like gurgling and even popping sounds.

Some of the GI issues may come from eating greasy foods and lacking enough roughage and water in your diet, precisely why you should observe proper eating habits when pregnant.

What is the gurgling sound in my stomach while pregnant?

The gurgling sound while pregnant could be caused by the movement of the amniotic fluid of the fetus.

It could be caused by relaxation of joints and ligaments in the pelvis or some GI problems.

Although we say that a gurgling sound in the stomach during pregnancy may not be a reason to worry, it is wise never to presume anything.

That should make more sense when you realize that any decision you make carries the weight of two lives with it.

Therefore, medical attention would come in handy, especially when the sounds are accompanied by pain.