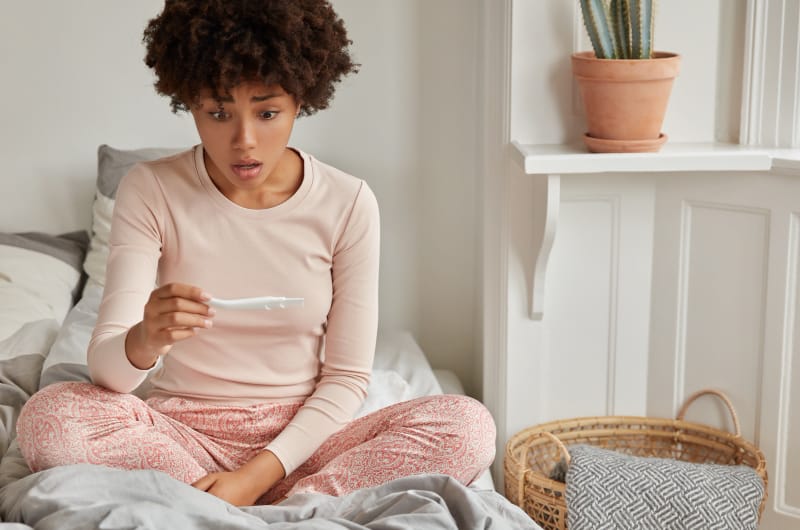 Provera medication is usually recommended to women suffering from hormonal imbalances, which affects their menstrual cycle. But in some instances, it can be combined with a Clomid drug to help conceive. You shouldn’t continue with Provera after getting pregnant. It can result in congenital disabilities if continued in the first trimester of pregnancy, but there are no increased risks of miscarriages than usual. Stop taking Provera once you find out about the pregnancy. If you took a Depo-Provera shot, there might be a need to see your doctor immediately.

Provera is a prescription drug, and you must have heard a lot about it. You might have heard it helps in conceiving and how it also helps induce a withdrawal bleed for women who bleed a lot.

There can be a lot of confusion regarding this particular drug and its usage.

If you find out you’re pregnant after taking Provera, many doubts and questions must arise regarding how safe your baby is.

Let’s find out the relation between Provera and pregnancy. How can you use this drug, and when should you stop taking it.

Progesterone is one hormone that controls the menstrual cycle and ovulation, the monthly release of an egg from the ovaries. It also helps prepare the lining each month when pregnancy doesn’t occur.

Below are FDA approved uses:

It’s also used for other purposes which aren’t FDA approved, such as:

But it may also be prescribed for a short period if a woman is trying to conceive, in conjunction with the ovulation-stimulating drug Clomid.

Provera and getting pregnant

Provera is a drug with various uses. While it’s used to treat multiple hormonal imbalances affecting your periods, it’s also used in certain situations prescribed to women to help them conceive.

It’s usually given for ten days, after which women can expect bleeding two to 10 days later.

As I mentioned before, it’s prescribed with another drug Clomid. This is done for women trying to conceive to initiate an artificial period to start the fertility drug Clomid.

Clomid is started on days three, four, or five of a menstrual cycle and helps ensure ovulation.

But what about the situations when you’re taking Provera for other issues such as hormonal imbalance and later find out you’re pregnant.

If that’s the case and you just found out about it, worry not because it’s not as bad as you think.

Provera is a type of progesterone used to stop menstrual bleeding, and when the drug is stopped, it causes withdrawal bleeding.

Once you find out about your pregnancy, Provera shouldn’t be taken further.

Make sure you take a pregnancy test to confirm your pregnancy because, wildly enough, the side effects of Provera are similar to the symptoms of pregnancy, such as nausea, vomiting, breast tenderness, and headaches.

Don’t worry; Provera doesn’t cause miscarriages, but it can lead to congenital disabilities in a pregnant woman exposed to the drug present in Provera in the first trimester.

What does FDA say

Provera has been classed as a category X drug by the U.S. Food and Drug Administration, and it can cause birth defects and is not supposed to be consumed during pregnancy.

While taking Provera might not cause miscarriages, it does cause various congenital disabilities.

Studies have been conducted on animals showing how the drug present in Provera may have an adverse effect on the developing fetus, including teratogenicity and fetotoxicity.

Other animal studies show that high doses of progestogens can cause masculinization of the female fetus.

Other than that, there might be an increased risk for hypospadias, clitoral enlargement, and labial fusion in children when mothers are exposed to it during the first trimester.

A few things to remember

What happens if you don’t get your period after Provera?

You should be able to get your periods 3 to 7 days after starting Provera.

If you don’t get your periods after finishing the course of this medication, check in with your doctor because you might be pregnant.

If you’re pregnant, you shouldn’t continue with Provera as it can cause birth defects in your baby.

What does Depo-Provera do to a woman?

Depo-Provera has a lab-made hormone and is a medication similar to the female hormone progesterone.

Also known as a birth control shot, it’s in injection form given to women to prevent pregnancy and works as birth control.

This shot works for 90 days, unlike oral contraceptives, but the medication remains in the bloodstream for longer. It needs to be taken after every 90 days to prevent pregnancy, and it’s injected either in the upper arm or buttock, which is quite different from other types of birth control.

If you’re pregnant, you shouldn’t take this drug because it can result in congenital disabilities.

Can you get pregnant on progesterone?

Progesterone is a vital hormone for women before and during pregnancy.

These hormones promote implantation of the fertilized egg in the uterus to establish a pregnancy and help maintain a healthy pregnancy.

So, this drug is often given to women who undergo IVF or other assisted reproductive technologies.

Because medications used in such procedures affect the normal production of the hormone progesterone, supplements are provided to help the body receive appropriate hormone levels.

Can you be pregnant while taking Provera?

Women can often get confused and mistake the side effects of taking Provera with symptoms of being pregnant.

Your doctor must have prescribed you Provera if they knew you wouldn’t get these side effects but if you do, then see your doctor.

You could also face some serious side effects such as:

Immediately see a doctor if you experience any of the above.

Finding out about the surprise pregnancy after taking Provera can be genuinely life-changing.

Usually, this medication is recommended to women suffering from hormonal issues preventing their menstrual cycle. So surprise pregnancy can be a lot to take in.

As soon as you find out, you should stop taking Provera. However, it doesn’t increase the chances of miscarriage any more than the natural risks of miscarriages.

It does cause congenital disabilities in babies when mothers are exposed to this drug for a long time in the first trimester of pregnancy.

If you want to prevent pregnancy, then Depo-vera injections are an option you need to consider. The bottom line remains that you need not worry about Provera harming your pregnancy.

Just book an appointment with your doctor and let them know about your usage of Provera so you can calm your doubts by discussing issues with them.