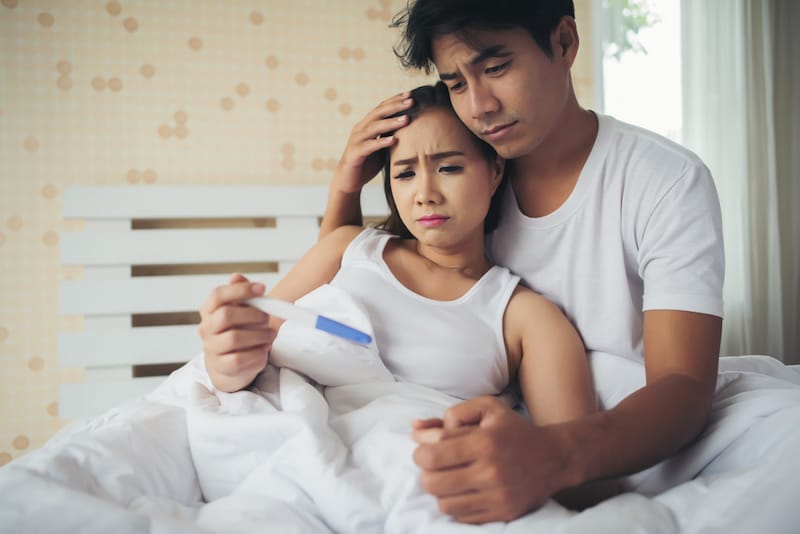 A pregnancy test can give you a false negative with a colorless line appearing on the stick, also known as an evaporation line. This could happen if you take the test too early in pregnancy, use an expired kit, or wait longer than the time window. The test could also be tempered in other ways, such as getting wet before using or not being kept under the right temperature. For an accurate result, prevent the factors that could cause a false negative by following the instructions. Most women do take 2-3 tests over time. If you’re still unsure, visit a doctor for a more accurate result.

Taking pregnancy tests is a nerve-wracking process and can make you take multiple tests before becoming sure about the results.

The dyed and colorless lines can be the difference between you being pregnant or not.

Getting false positives is rare as compared to a negative result. Though the test might seem simple, the timing of taking it can affect the lines and the result.

In many cases, women who saw an evaporation line signifying they weren’t pregnant got to know they actually were pregnant.

So, what decides the line be colorless or dyed? How can you surely know to depend on the result your stick shows? Is there a way to be sure about the result to avoid confusion?

Before going to the doctor’s to confirm your pregnancy, women prefer to take a home pregnancy test.

This comes in the form of a stick, which requires you to urinate on it and find out if you’re pregnant or not.

As you become pregnant, your body produces these hormones known as human chorionic gonadotropin (hCG).

This can be detected through your urine sample, and this hormone increases as pregnancy progress.

There’re different kinds of pregnancy kits available in the market, and one can get confused.

Typically, if the stick shows one line (the control line), it often means you’re not pregnant.

But if there is a control and test line, it can indicate pregnancy. But it’s not always so simple because one of these lines could be an evaporation line.

When there’s a false negative or a false positive, it can mentally and emotionally affect you. If you’re not expecting pregnancy, but the home test reveals an evaporation line, it can make you sad.

It’s better to know about the evaporation line and when it appears. Not every test shows this line, and it depends on the person’s urine composition.

The evaporation line is a colorless streak, not a faint line.

To put it plainly, if you see the evaporation line, it could mean that it’s a negative result for pregnancy.

The only reason it could be wrong would be if influenced by any of the above reasons.

How does a pregnancy test work?

As we got to know, when a person gets pregnant, a hormone known as hCG starts producing in the body and progresses as pregnancy advances.

The pregnancy test kit can detect this hCG level, however tiny in amount.

But sometimes, when a person is to test in the very early days, the test might not work as hCG isn’t produced in enough quantity. It’s very low immediately before and after the first missed period.

These hormone levels can also vary from woman to woman and influence the test. When you might take a test in early pregnancies, the positive line might be very faint, but usually, it’s colored.

Even if a faint colored line, you’ll see the dye color in the line, but it won’t be colorless like an evaporation line.

Even if you go through the instructions and perform the test following all those rules, you might still have a false negative, which is more common than a false negative.

Lines on pregnancy tests can be challenging to understand, so women usually take 2 or 3 of these tests over a couple of days due to the problem with accuracy.

Signs of a positive test

A pregnancy test could be positive if you see the following signs:

Things to do to prevent evaporation line

It’s simple when you follow all the rules and can avoid a false negative.

The rules are there for a reason, and if you miss out on even one can give a different result than the actual one.

Below are some rules to follow to avoid a false negative:

Of course, the more you wait into the pregnancy, the stronger the positive line will be to show you’re pregnant.

But not everyone might want the pregnancy, and if you take it as early as possible, make sure to take it in the early morning.

The hormone will be more present in the morning pee, and your pee can become diluted by the end of the day, so morning time is the best for a clearer result.

Is an EVAP line thinner than a positive?

An evaporation line is colorless and doesn’t have even the faintest of color to it.

On the other hand, a positive line has color, usually given pink in most pregnancy sticks.

Even if it’s a faint pink, it could be a sign of pregnancy because sometimes the hCG level in the urine could still be low.

But the positive line is slightly thicker than the EVAP line, and most people don’t even see a difference.

Still, the major difference is the presence of color, indicating a positive line.

Does a faint positive get darker when it dries?

There’s a reason why the instructions in the kit tell you to check the result immediately after the waiting window is over.

As long as the urine doesn’t dry up on the stick, you’ll see the accurate result.

As soon as the urine dries on the kit, the line will lose color and become discolored or grey, making you think it’s an evaporation line.

Doesn’t matter if the line was bright pink or faint pink earlier. As soon as the urine dries, you can’t tell an accurate result.

What happens if you oversaturate a pregnancy test?

When women have a high level of hCG hormone in their urine, it can affect the pregnancy test result.

The high levels can oversaturate the test and result in a false negative, known as the hook effect. It might also happen with blood or other samples.

Should I take two pregnancy tests in one day?

Taking two tests at a time won’t give you different results. The hormone hCG present in the urine either gives you a positive or a negative result.

At the same time, the presence of this hormone would be the same. But if you take the test a few days after then, the result might change, for if you’re pregnant, the hormone level would have increased.

Pregnancy tests were made for the convenience of pregnant women to know when they’re pregnant and know it without letting anyone else know, be it their doctor. But it can become messy if you don’t follow the instructions.

Missing out on even one instruction can result in a false negative, and you might see an evaporation line that could turn out to be a pregnancy. There’re a lot of factors at play to ensure a correct result.

These pregnancy test kits are made to help you out. Usually, people take 2-3 tests over a week to ensure accurate results.

But if you think the result might not be correct, it’s best to book an appointment with your gynecologist and visit them with a close friend or family member.