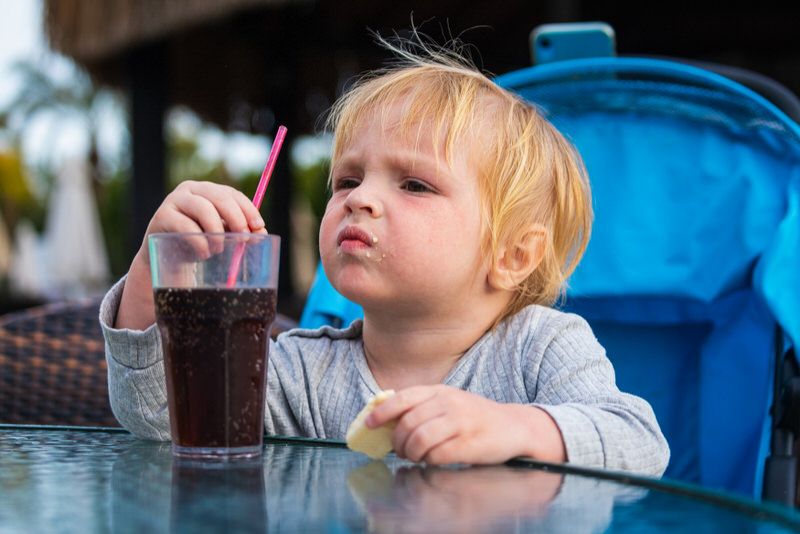 Sodas contain caffeine and added artificial sugars, which impact a growing child in many ways. Drinking sodas over the recommended amount will cause your child various health issues, including diabetes, depletion of nutrients and vitamins, disturbed stomach balance, low bone density, and dental hygiene. In addition, caffeine in sodas can make your child addicted to this beverage and cause dehydration, adrenal exhaustion, and other issues. It’s essential to limit your child’s soda intake per week and teach them the importance of giving up soda in their life.

For some reason, when someone says they let their growing kid drink a cup of coffee, it comes as a shock to almost everyone who knows its side effects.

But when it comes to telling the same people that they let their kids consume soda (caffeinated beverage), then it’s considered normal. Soda contains caffeine, and any form of it isn’t suitable for growing children.

So, when you let your child consume soda, you’re also unconsciously making them get addicted to caffeine in the process.

But is caffeine the only issue here? How does drinking soda affect the growth of a child? What role does caffeine play in soda for a growing child, and how seriously does it affect your child? Let’s find out!

Depending on the different age groups and body weight your child might belong to, their caffeine intake is limited per day.

As a measure, you should know that a healthy adult should not have more than 400 milligrams of caffeine in a day.

Many food items and beverages such as soda contain caffeine, which also accounts for the total caffeine consumed in a day. Canada even recommends their preschoolers not get more than 45 mg of daily caffeine intake.

The amount of caffeine all the popular soft drinks contains:

Caffeine is a stimulant defined as a drug that stimulates the central nervous system making one alert and increasing their attention span if consumed in a controlled manner.

For kids, the impact of caffeine from sodas is terrible in a lot of ways that might actually hinder their growth as well:

Caffeine might not mainly be a factor in stunting the growth of your child. But after going through its side effects on a growing child, you can very well understand the potential impact of caffeine and the damage it might cause to your child’s growth.

But caffeine is only a tiny part of the more significant issue. So let’s take a look at other things in the soda which impact your growing child!

Side effects of soda on growing kids

Ways to limit soda for kids

It’s vital for you as an adult to take responsibility to administer how much soda your child is consuming in a week. However, as a working parent, it can be challenging to look at everything your child does on top of household chores.

But it’s necessary to note down the food and drinks consumed by your growing child as it greatly affects their physical and mental growth. You have to minimize their soda consumption if they’re getting addicted to it before it’s too late.

Start by slowly and gradually easing them into a routine of replacing their soda with water if they habitually drink it with their meals. It’s because if your child is habitual of consuming a lot of soda, they might witness caffeine withdrawal symptoms, including depleted energy levels for a few days.

You can even offer milk or fruit juice as a substitute. But if you have a stubborn teenager, you can encourage them to work out more to burn the excess energy and sugar instead of banishing their soda altogether.

Does soda shorten your life?

Drinking a lot of soda disrupts one’s health and creates a lot of health issues. Due to the nature of soda, containing high sugar levels increases the risk of death from cardiovascular or digestive problems.

Consuming cans of soda with the increase in caffeine levels of these drinks will prove to be harmful.

Can you live off of only drinking soda?

No. Surviving solely on soda is the worst idea you can implement for your life. It doesn’t have any nutritional value and can create several health issues for any healthy body.

You can’t switch your water to soda as nothing fulfills the water requirement, and this is the worst replacement you can think of in any possible way.

Will I lose weight if I stop drinking coke?

Any soda contains a high level of artificial sugar which is bad for your health and causes multiple health issues.

Cutting down on this form of sugar will definitely result in weight loss and aid in weight loss. Things will be much better if accompanied by healthy eating and a regular exercise routine.

Should children have soda?

Any growing child shouldn’t have too much soda. Until you become an adult, you shouldn’t drink more than 8 ounces of sugar-sweetened drinks in a week. These include sodas, energy drinks, flavored water, and sweetened teas.

There should be a limitation on the amount of these sugary beverages consumed in a week overlooked by an adult.

Soda might not technically affect your child’s growth or physically stunt their growth, but it does more harm in the long run than you could realize. These sugary beverages your child consumes with so much enthusiasm can seriously impact their health and cause various health issues like diabetes.

If your child consumes more than the recommended sodas in a week, the caffeine and sugar level increases simultaneously.