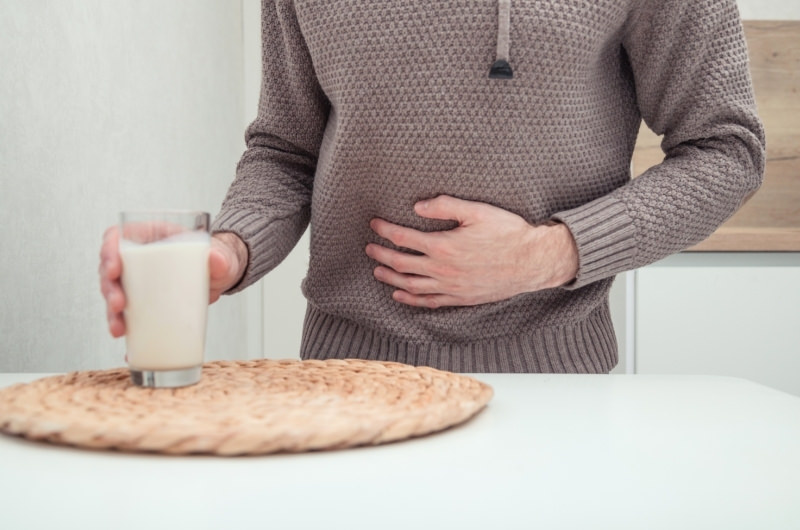 Almond milk is popular among millions of people for being high in nutrients, enriched with vitamin E, and having a low-calorie deficit. As a matter of fact, one cup of almond milk contains 30-50% of the daily requirement of vitamin E. However, you might feel constipated from some of the additives in store-bought almond milk meant to preserve the milk for shelf life or enhance the taste.

Almond milk is a great source of nutrition and has proved to be a very healthy alternative to cow’s milk. Millions of people have changed from animal-based to these plant-based milk alternatives, one of which is almond milk. But does drinking almond milk cause constipation? Let’s find out.

So how come you experience constipation from having this plant-based milk which has so many benefits? Let’s take a look into what causes this constipation and what you can do about it!

Before we look into what must be the reasons for your constipation from having almond milk, let’s take a few minutes to get to know the benefits of this plan-based milk and why people prefer it over other sources of milk?

Almonds are naturally enriched in vitamin E. Having a cup of almond milk (240 ml) can fulfill your 20-50% daily vitamin E dose. And since vitamin E is a powerful antioxidant that brings down inflammation and stress in your body, it’s all the more reason to love almond milk.

With the current lifestyle, vitamin D deficiency is something most people suffer from right now (so do I). It’s an essential nutrient needed for good bone health, heart, and immune function.

Most almond milk has vitamin D2. 1 cup can fulfill 25% of the recommended vitamin D intake.

Almonds are considered rich in fats and calories, but not in the case of almond milk. While going through the process of obtaining milk, only a small portion of almonds remain in the final product.

If you’re trying to be health-conscious or eat better, replacing your animal-based milk with almond milk can help you. The unsweetened almond milk is recommended for anyone looking for a replacement in their dietary needs.

Most people switch to plant-based milk, such as almond milk, only because they are lactose intolerant, which is a pretty common condition in most people now. It is when people are unable to digest the sugar in milk.

Caused due to genetics, aging, or other medical conditions, the consumers suffer from stomach aches, bloating, and gas problems.

This is why most people are recommended to switch to almond milk (plant-based) naturally lactose-free.

Another group of people amongst whom almond milk is popular is vegans, who avoid animal milk as a part of their lifestyle choice.

It’s preferred over animal milk and sometimes even soy milk as a good alternative as an entirely plant-based drink.

Almond milk proves to be a good alternative for those looking to reduce potassium and phosphorus intake due to kidney disease.

As people with chronic kidney disease often avoid milk due to its high levels of phosphorus and potassium. Since their kidneys cannot properly clear these nutrients, there is a risk they will build up in the blood.

Does almond milk cause constipation?

By listing the benefits of almond milk, we have clearly established numerous benefits of this plan-based milk. It’s not only how nutritious it is but also why it is preferred over other milk sources.

The store-bought almond milk is nothing but a watered-down final product. By this, I mean that going through a rigorous process of attaining milk through almonds, the end process doesn’t have almond solids, which are good for one’s health.

The various reasons for constipation could be:

How to get rid of almond milk constipation

By now, you must have realized almond milk is the reason behind this constipation of yours. However, you’re still doubtful if you should reduce its intake or completely stop consuming it. You must love the taste of almond milk, with all the added benefits to it. It must be making you wonder how to still keep consuming it but not get constipated.

It’s pretty simple, actually. Get homemade almond milk, or better, make it yourself.

If you know you need this plant-based milk in your life, you need to make choices to make it possible. While many people prefer making almond milk at home themselves, there are good delivery options where people provide homemade almond milk.

But first, let’s understand why homemade almond milk is the solution to your problem.

This is why most people prefer making almond milk by themselves.

Can almond milk cause bloating and constipation?

Many store-bought almond milk brands contain preservatives, additives, and other stuff to make it more like animal-based milk. This is why it can cause issues with your digestive system, such as bloating and constipation.

What are the negative effects of almond milk?

Making mass almond milk requires a lot of water consumption, which could be detrimental to the environment. Other than that, it depends from person to person if almond milk is suited to them, as some might be sensitive to tree nuts and allergic even.

Is almond milk hard to digest?

Almond milk is high in fiber. It aids in digestion rather than causing any block when compared to animal-based milk. But the problem of constipation or other digestive issues arises when a person uses a brand with many preservatives, additives, and chemicals. This is why homemade almond milk is recommended to people who suffer from constipation.

Is it bad to drink almond milk every day?

Drinking almond milk every day is beneficial to your health with high in nutrition and rich in vitamins. But the quantity per day depends on how your digestive system reacts to it. If you’re unable to intake more than 1 cup a day, you should limit the quantity.

Almond milk is a preferred drink for millions of people now. Famous for being highly nutritious, plant-based, rich in vitamins, it is something a group of people prefers over animal-based milk now. Also, well-known to help with one’s diet and maintain a healthy body proportion, people choose it over other kinds of milk.

As well-known as almond milk has become, it is also a cause of digestive issues to many, such as constipation. In fact, as many as 27% of adults experience it and its accompanying symptoms, such as bloating and gas.

While it could simply be because you have tree nut sensitivity or are allergic to it, another major reason could be because it’s store-bought.

There are various reasons why store-bought almond milk could be causing this problem, but you can make it better by making almond milk at home. Overall, it is proved that almond milk has many benefits, so if you’re lately feeling constipated, why not give homemade almond milk a try?!