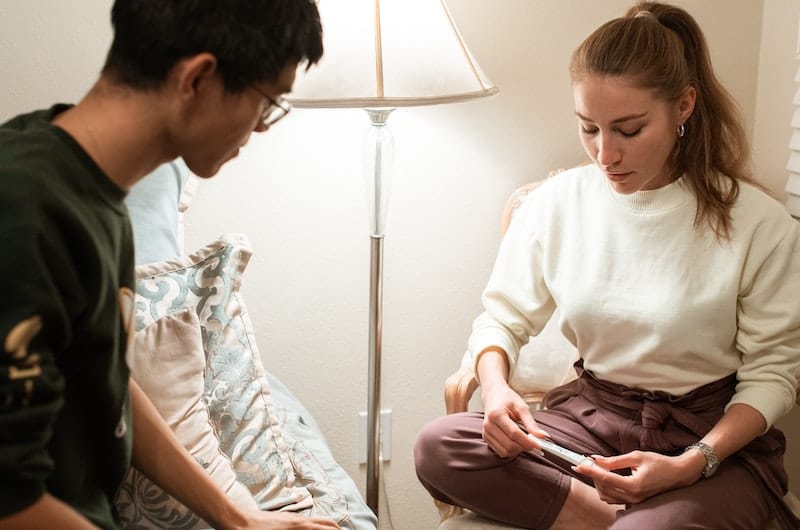 When you are sexually active and miss your period, the first thing that may come to your mind is to rush to the drug store and buy one of the many self-pregnancy test kits available.

Most pregnancy test kits are exposed to a stream of urine, and after that, a line or two may indicate whether you are pregnant or not.

The lines appear because the test kit detects in the urine a hormone known as human chorionic gonadotropin or hCG, found in urine and produced during pregnancy.

However, the positive result you get after a pregnancy test may be false, which means you may not be pregnant. The pregnancy kit can easily detect some constituents in your urine that mimic hCG. In addition, proteins or even blood in your urine can also elicit a false positive.

Other factors that may cause a false positive in a pregnancy test include personal error, miscarriages, abortion, medications, and medical conditions. It may also be a confusing evaporation lane.

We call it a technical false negative because, unlike the other false positives, there is an actual pregnancy, which is not viable.

In our article, we will discuss in detail the very causes of false-positive in pregnancy, including but not limited to UTIs, to broaden our perspective on the same.

Miscarriage happens when a pregnancy is lost due to some medical conditions and other times due to unknown causes.

On the other hand, abortion is when one opts or is even medically advised to willfully terminate a pregnancy, in which case the reasons may vary.

Although pregnancy ceases to exist after both, hCG built up in the body does not disappear during pregnancy.

It may take up to 12 full weeks for the hCG clears from the system. If you take a pregnancy test within that duration, you will get a false positive.

In other unfortunate scenarios, a miscarriage can happen spontaneously; the entire fetus may not be wholly expulsed from the body, leaving the hCG levels still high, although accompanied by other symptoms like pains and bleeding. Such instances may call for emergency medical attention.

Infertility can be the nightmare of any woman who would love to be a mother, and for a long time, it has caused unending strife and bad blood between couples since the onset of marriages.

Thankfully, medical expertise has made it possible to treat the same hormone produced during pregnancy with hCG.

The medication enables the follicles to release a mature egg into the woman’s ovary, making conception probable.

Even so, the hCG must take approximately 14 days to wear off. If you take a pregnancy test before that time is over, you may get a false positive.

Other medications are also known to cause a false positive in pregnancy tests. They may include anti-anxiety drugs, antipsychotics, anticonvulsants, diuretics, and antihistamines.

Some medical conditions may inflate the hCG level in your body and cause a false positive in case of a pregnancy test.

If you rule out other causes, you may want to be tested for ovarian cancer, kidney disease, UTIs, ovarian cysts, pituitary problems, etc.

Like any other merchandise, pregnancy test kits can go out of date and even have some problems in their functioning.

However, given that it is our responsibility not in the least to overlook such important information, if you do, you may end up with a biased result like a false positive.

Sometimes we may not follow the steps stipulated in the instructions for the pregnancy test kit. If we don’t, we may as well get a false positive.

For perfect results and avoid a false positive, you can use the kit when your urine is most concentrated, don’t use it too early in your menstrual cycle, leave the dip-stick enough time in your urine, and set a time to check the results.

When you don’t follow the proper instructions, the test results may be biased. For example, the most used kits show two lines when pregnancy is detected and a single line when there is no pregnancy.

Sometimes you may realize that the second line is not clear or distinct as the first, a probable reason to speculate it may be an evaporation line.

Such errors may necessitate the need for a second test.

Why does UTI cause false positive pregnancy tests?

UTIs can inflate the hCG and cause false-positive results like ovarian cysts and kidney disease.

Some symptoms of UTIs can mimic early pregnancy signs like nausea, frequent urination, back pain, and fatigue, among many others. They may also resemble the ability to inflate the levels of hCG.

The most important thing to do when using a pregnancy kit is to check the expiry date and then read and follow the stipulated instructions on how to use it.

However, in light of today’s article, if you find any condition or medication that may compromise the result of a pregnancy test, you may as well forget about it and visit your doctor for more elaborate testing that remains affected by the same conditions or medications.

If you have a UTI that may affect the correctness of your pregnancy test, it may be equally important to treat the UTI to get the testing done to correctness.