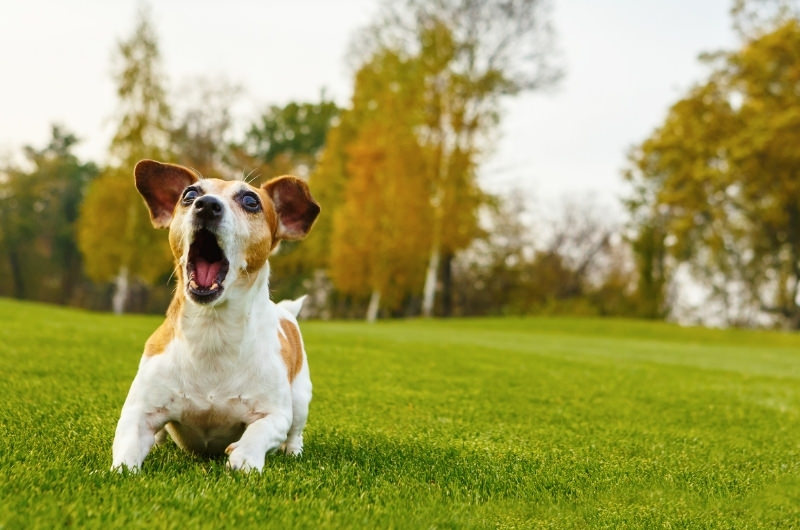 Depending on your dog’s breed and how often they bark can be the leading factors affecting your hearing and can lead to potential hearing loss. The loudest a dog can bark is 113 dB that is from a golden retriever. Constant barking can affect your hearing, so people with professional dog handling careers have damaged hearing from working in this field over the years. No dog constantly barks. If they do, they have issues that need to be treated.

Most people love dogs as a pet and get them because they’re obviously the friendliest. Unfortunately, they can also scare the intruders by barking.

As friendly as they are, your dog’s bark can mean a lot of things, from warding off the intruders to inviting humans and animals to play. Depending on their breed, a dog’s bark could be very loud or just a tiny bark.

As great as having a dog as a pet, some things could be problematic, such as how loud they bark. Your dog’s bark could be the potential reason behind your damaged hearing or affect your hearing to a great extent. To learn more about how that takes place, let’s keep reading!

How loud can dogs bark?

Suppose you’re going out there looking to become a potential dog owner or already have a fluffy friend. In that case, most people overlook how loud their dog can bark. How you can determine this depends on the breed of your dog.

Many people prefer dogs with powerful bark since they are looking for one who can protect their home from intruders.

The loudest they can find a dog can bark is 113 decibels. Golden retrievers come under this category. They are widely loved for being so intelligent, gentle, devoted, and also because of how loud they can bark.

The second loudest bark recorded is from German shepherds at 108 decibels, who are widely recognized for working for the military and as police dogs, including assisting the visually impaired. They’re known for swiftly altering the others when there’s the slightest sign of suspicious activity.

Other breeds have a loud bark, including Doberman pinscher, Scottish terrier, and redbone coonhound.

To put this into perspective, the normal hearing range for humans is 85 dB, and anything above it is harmful depending on how long and how often you’re exposed to them.

From the list mentioned above of the dog breeds, it’s normal to conclude that their barking is way above what humans can handle but usually lies somewhere between 80-90 decibel range.

Outdoors generally don’t have the echo or bounce off the sound waves common to an indoor area. So if your dog mostly stays indoors, there’s a higher chance of their barking affecting your hearing.

It would take several hours of exposure to cause permanent damage, although it may vary from breed to breed and how often they bark.

It’s even more severe for professional dog handlers as they constantly work with dogs, leading to noise-induced hearing loss. The people working in this profession have no choice but to work in enclosed spaces with the dogs, such as inside vans or kennels.

So, people working in this industry have to wear adequate hearing protection and obtain accurate risk assessments to prevent severe long-term impairments from hearing.

People are trained in health and safety regulations awareness. But, still, it is hard to handle all this noise constantly, even after such training. So, people do end up suffering from some hearing loss after working years in this field.

While noise from dog barking is an issue in itself that could affect your hearing based on various factors, many other issues could damage your hearing.

What happens if a dog barks too much?

If your dog is barking too much lately, they might suffer from separation anxiety as they often bark too much when left alone.

Other issues they exhibit are pacing, destruction, depression, and inappropriate elimination. Apparently, they do it to hear their voice. If that’s the case with your dog, you need to help them overcome their issues.

Is it healthy for a dog to bark all day?

It’s not a natural behavior for a dog to bark all day. If you notice that’s happening, then either they’re excited for some reason or stressed. While excitement lasts for a few hours, if they’re still barking, they have other issues.

How do I get my neighbors dog to shut up?

Dogs bark, and that’s normal. If this is in excessiveness, you can talk to your neighbor and explain your issues with the barking in a civilized manner.

Maybe you can become friends with the dog too. When nothing is working, and your neighbor isn’t doing anything to stop their dog from constantly barking, the last resort is to file a formal noise complaint.

Will a dog whistle stop a dog from barking?

Training your dog to be obedient is something a lot of people do. It might even involve teaching them with a whistle to modify some specific behaviors.

Without proper training, a whistle is just a whistle, so you need to get professional training done. If you overuse it, your dog will even start ignoring it. So, there’s a limit to its usefulness, but it does work if used correctly and in limitation.

It’s normal for your fluffy friend to bark, but it can become an issue if this barking is constant and happens all the time. This would mean there is an issue your dog is facing, and it could also lead to potential hearing loss due to this constant barking.

Depending on the breed, your dog can bark very loudly and more than what is normal for humans to bear. This can be a cause of damaged hearing. It becomes a real piece of work for professional dog handlers as they are the ones who suffer the most. Giving your dog some training and trying to solve their issues can help them stop barking constantly. Then you and your furry friend can both live in peace!