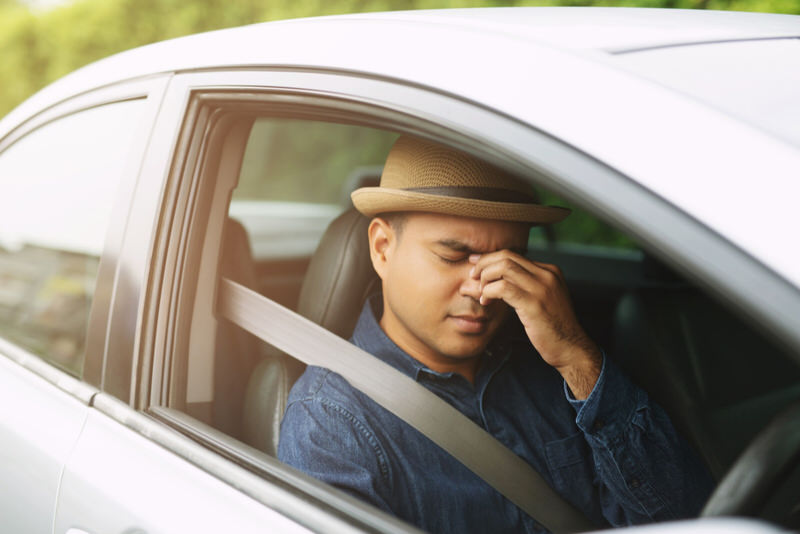 Experiencing a brain shut down can be scary for you don’t know what happened. It’s called microsleep, where your brain shuts down for a few seconds even if your eyes are closed due to sleep deprivation. This burst of sleep can end up harming you and those around you if it occurs in a dangerous situation. There’re plenty of signs and warning symptoms to watch out for, and there are a bunch of ways to ensure proper rest and sleep. If, for some reason, you can’t due to a medical condition or work schedule, then seek adequate medical advice and treatment or take necessary precautions.

You’re driving back home from work and suddenly realize that even though your eyes were wide awake, you actually dozed off for a second. During this short time, it’s as if your body was on autopilot and felt your brain shut down, even if it was for 5-10 seconds. But you kept on driving only to realize it after a few seconds.

Incidents like this can frequently happen, like when you’re sitting down for an examination and space out for a minute or two where you forget where you’re and what you’re doing. This shutting down of the brain can be especially dangerous if you’re doing something which can endanger your life, such as driving or operating a piece of heavy machinery.

But what causes this in the first place? Why does our brain shut down for a few seconds? Why do we space out like that? Is there something we can do to avoid it from happening in the future? Let’s find out.

Reason why your brain shuts down for a second

If this is a phenomenon that you’ve witnessed for the first time, you probably won’t take action on this situation. But if something like this happens a couple more times, you would want to know what’s triggering this in you.

This shutting down of the brain happens in people suffering from microsleep. Simply put, microsleep is a fleeting, uncontrollable, brief episode of sleep which can last from a second to 10 seconds.

A very common and reasonable phenomenon which happens in people who have been tired for a long time and couldn’t get proper sleep. If this rings true to you, then this is probably why you’re having these episodes. As you’re fighting sleep and trying to stay awake, these episodes occur when your brain functions fail as it can’t take it anymore.

If you’re aware of REM and Non-REM sleep stages, you should know that microsleep isn’t a part of either phase of sleep, and it’s a whole another category that causes fleeting uncontrollable sleep to take over you. A small number of brain cells that are responsible for keeping you awake or asleep can suddenly shut down.

Some reasons for sleep deprivation are:

Symptoms and signs of microsleep

There’re some obvious symptoms and signs visible in people who have episodes of microsleep:

If you’ve experienced even one of these symptoms or signs a couple of times now accompanied by being tired for days due to any reason, then it could be an episode of microsleep.

Usually, an episode of microsleep lasts for about 10 seconds, and then your senses wake you up, which is your body jerking you awake from this state. And suddenly, you feel like you just had an out-of-body experience where you don’t even remember what just happened as your brain activity stops.

Times when you microsleep in a day

Microsleep can even occur in people who’re getting 5 hours of sleep daily. What triggers microsleep is that your body isn’t getting the required amount of sleep that it needs.

So, you don’t have to be an insomniac to experience microsleep. The time when it’s frequently seen in people is when they usually sleep, mostly at night. But it’s also prevalent during the mornings. A lot depends on your schedule.

A lack of sleep can impact a lot of things like your mood to an extreme extent by causing mood swings such as irritability. It can also cause forgetfulness, poor performance, obesity, high blood pressure, and heart attacks. So, it’s essential to take preventive measures if you’ve lately been experiencing these episodes regularly.

For those who have experienced their brain shut down for a second and nothing terrible happened because they weren’t in a dangerous situation, it’s essential to understand why it can be risky.

You lose control over your body when your brain shuts down, and a common after-effect is you don’t remember what just happened or what you were doing. If you happen to go through it while sitting in a classroom giving your examination, then it’s nothing. The story changes when it happens while you’re driving.

The following situations are an example of how risky it can be:

So, there’re some occupations where it can severely be harmful to you or those around you if you microsleep.

According to the AAA Foundation for Traffic Safety, it’s estimated that 16.5 percent of road accidents involve a sleepy driver. So, it’s vital to know how to stop the cycle of microsleep.

So, the risks of microsleep are something you don’t want to experience, and there’s an immediate need to cure your sleep deprivation. If it’s something you can cure by increasing your period of sleep, you should take the proper amount of rest and sleep your body needs to avoid getting into situations like these.

There’re some changes you can make to improve your sleep pattern:

These are a few steps you can include in your lifestyle if you’re having trouble improving your period of sleep. But sometimes, sleep deprivation is due to medical conditions involved, for which seeking advice from a medical professional is the best thing you can do.

There will also be cases where people can’t continuously sleep for 7-8 hours because of their work schedule. In those cases, it’s essential to avoid situations where you can potentially end up hurting someone or yourself.

Many accidents occur because the driver is found guilty of zoning out for 5-10 seconds, which can cause an accident, especially on a highway.

Even if you don’t mean to, microsleep can occur at any time and place. The warning signs are all there, such as blinking rapidly to get rid of sleep, yawning continuously, and having heavy eyelids.

If you end up driving, you can pull up somewhere, have caffeine, or just sleep in the car at a rest stop.

These are only a few options that can give you some time to catch on important 10 to 15-minute sleep or call a cab or someone to come to pick you up. This isn’t a permanent solution, and you should find other ways to catch up on your sleep.

There are different kinds of occupations in this world that require you to either work at night or have different schedules daily or so draining like physical work, which doesn’t give you enough time to rest up.

You can choose to be in a different occupation if this is something you can’t handle, but sometimes it’s just part of the job you’ve to accept. You can choose to have coffee to fight off sleep, move around, or do 15 minutes of exercise to keep yourself alert at work.

As a part of your job, you do become accustomed to this lifestyle, and these are small ways to help you in the process. If in a situation where you’re doing some dangerous work, you can ask an employee to cover up for you for some time and, if possible, catch on some sleep.

What happens during microsleep?

Microsleep is this weird state that can only be described as a small burst of sleep where the person doesn’t know what’s happening around them. Their eyes are often awake, but they just space out, and it’s like the time is frozen for them.

You wouldn’t know if you’re in some dangerous situation like driving a car and won’t be aware of your surroundings. This can lead to many accidents, be it on-road or workplace.

Micro sleeping isn’t a good phenomenon and can be dangerous depending on your situation. If you microsleep while coming back from work in the backseat of a cab, that isn’t dangerous. If you’re driving home back from work, then it’s dangerous.

You can endanger your life and those around you. People who have had these episodes need to seek professional help.

Micronapping is different from microsleep because a person having an episode of microsleep won’t do it intentionally, but a person micro napping would. Microsleep happens when one is sleep-deprived, and it happens without the person knowing about it as their system shuts down for a few seconds.

Micronapping is power napping, where the person sleeps for 20 to 30 minutes to get rid of sleepiness and feel refreshed. In some workplaces, it’s even promoted for the employees to microcap after lunchtime to increase productivity.

The brain fog can sometimes feel like your brain is shutting down. It’s an experience where you feel you cannot use your brain, and nothing around you makes sense.

Brain fog can result from sleep deprivation, nutrient deficiency, bacterial overgrowth from overconsumption of sugar, depression, or even thyroid condition. It could also happen from eating too much and too often, inactivity for a longer time, or chronic stress.

Can part of your brain be asleep while you are awake?

Due to sleep deprivation, some parts of our brain responsible for our actions can go offline or fall asleep and not function for a few seconds. This can hinder decision-making.

It’s like spacing out while your eyes are open; you don’t know what’s happening around you can you can’t get your brain to function. You might not even know your state until you come out of it and then think about what just happened.

The feeling of your brain shutting down can be scary when you experience it for the first time. You don’t know what just happened, and when you try to recall, you might not remember the last 10 seconds and what you were doing or thinking during this time.

This sleep switch turns on when you experience an episode of microsleep. It can be dangerous if you’re in a situation where it can harm you and those around you. So, watch out for warning signs and symptoms where sleep deprivation plays a key role in it.

If you’ve experienced it once, it’s time to start acting on it and ensure you get proper sleep to avoid microsleep. In other cases where you can’t control your sleep schedule, it’s best to visit a doctor and seek treatment.

There’re always ways to get out of a situation where you can end up hurting people around you. So try to choose wisely and take better care of yourself.