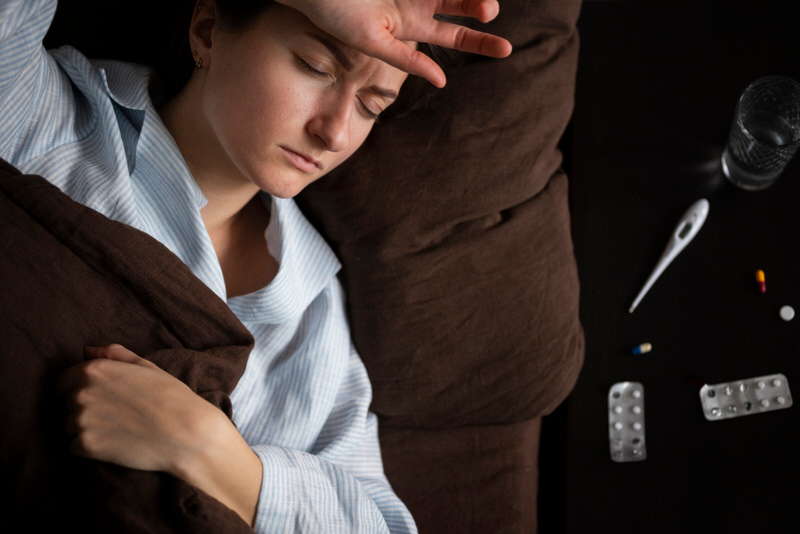 Psychological diseases such as Parkinson’s and essential tremors could be a risky underlying cause for your bed-shaking feeling. Each disease has its own list of symptoms that differ from the other. While you can get a basic understanding by comparing the symptoms with what you’re experiencing, it’s advised to get a proper test carried out by a medical professional to confirm your doubts.

The treatments available to you may differ from disease to disease, and each may contain treatments like medication, therapy, and surgery. Anxiety too is capable of causing temporary tremors, which can be cured through relaxation exercises.

Dizziness is another aspect worthy of note due to the condition known as benign paroxysmal positional vertigo. This is known to trigger a false sense of movement in your brain.

If you feel like your bed is shaking, you’d naturally expect a physical disturbance. But it might not be so after all. In fact, unless there’s an earthquake, the most probable cause could be an indication of a mental condition.

Various symptoms of psychological disorders could provide you with an explanation as to why it feels like you’re shaking whenever you lie down.

This sensation, known as ‘vertigo,’ which is a common symptom of psychological disorders, refers to the overwhelming feeling that the environment around you is spiraling.

What disorders can be the underlying cause for your bed shaking sensation? How can you identify the exact disease that you’re dealing with? What kind of treatments are available for such conditions? Can your shaking sensation while lying down be related to anxiety? What causes dizziness when lying down?

What disorders can be the underlying cause?

The below list shows us the most common possibilities, in no particular order.

This disease occurs with the loss of nerve cells in the ‘substantia nigra’ segment of your brain. Dopamine, which is supposed to be produced by the nerve cells are also halted.

This leads to shaking and difficulties in maintaining balance and coordination. Since its symptoms include internal and external tremors such as shivering hands and limbs, you might easily feel that the bed itself is shaking.

This is caused by the deterioration of your brain’s cerebellum. The cerebellum plays an important role in regulating your rhythmic movements.

The tremors triggered by this condition can unintentionally affect your hands, legs, and head.

This condition also causes internal and external tremors that might seem like your bed is shaking. It occurs when your immune system starts to attack your own body, causing damage to your nerve cells.

Sometimes, you may notice that particular positions in which you lay your head cause this shaking sensation.

If so, chances are that you’re suffering from this condition, which is a common inner ear problem that triggers an unreal spinning sensation.

This is a neurological condition that involves involuntary, repetitive movements of large muscle groups, especially in the head and neck area during sleep.

A comparison of symptoms of related medical conditions

Since there are quite a range of possible explanations for the shaking sensations that you feel when lying down, it’s important to distinguish each to identify what exactly you’re dealing with.

Apart from tremors, you can expect the following symptoms among the most common movement disorders.

What kind of treatments are available for these conditions?

The answer to this question would depend on the cause of your internal and external tremors.

When it comes to Parkinson’s disease, the best way to treat your symptoms would be through medication, therapy, and even lifestyle changes.

Levodopa, Dopamine agonists, Amantadine, and COMT inhibitors are well-known medications for this disease. Deep brain stimulation surgery and pump-delivered therapy are other treatment forms that you could follow.

This form of therapy was approved by the US Food and Drug Administration in 2015 and allows the medication to be directly transferred into your small intestines as a gel format, thereby reducing the need to take numerous pills for relief.

While there is no cure for this condition, various treatments exist to keep the symptoms at bay. Injections such as interferon beta – 1a, glatiramer acetate, and infusion therapies such as alemtuzumab and mitoxantrone exist to manage the symptoms.

Furthermore, oral treatments like fingolimod and teriflunomide can be tried out under medical supervision.

Medications such as beta-blockers aid in relieving tremors in some people, but aren’t recommended if you’re suffering from asthmatic and heart conditions.

Even tranquilizers may be prescribed by doctors to treat anxiety that may worsen tremors.

Can the shaking be anxiety-related?

Anxiety-stricken tremors are highly possible but are nothing to be too concerned about. According to recent statistics, 40 million American adults experience anxiety disorders.

When you realize that your shaking is a result of an anxiety attack, the most effective strategy to stop it is by calming your body into relaxation. In such instances, you can follow the progressive muscle relaxation technique.

By focusing on the contraction and release of your muscles, you can distract yourself from achieving a piece of mind.

You can also steady yourself by following yoga poses. In fact, according to a 2013 study conducted by the US National Library of Medicine, regular yoga practice has proved to minimize anxiety symptoms. You’ll also find mindfulness exercises helpful in gaining a calm awareness of your body.

Long-term relief can also be provided by seeking help from a licensed psychiatrist, who can personally look into your individual condition and recommend what’s best for you.

What causes dizziness when lying down?

Rather than a persistent shaking sensation, if what you’re experiencing is certain dizziness that makes you feel as if you’re moving, chances are that you’re dealing with benign paroxysmal positional vertigo.

This kind of vertigo can happen in various instances, like when you’re sitting up after lying in bed for a while, when you’re rolling over in bed and when shifting from a standing position to a laying down position.

The simplest way to explain the cause of this dizziness is by understanding the most important organ in your body which maintains balance: the ear. Your inner ear possesses calcium crystals that balance your body’s position in accordance with your surroundings.

Sometimes unknowingly, these crystals can exit their location and enter the vestibular system.

Once it removes itself from where it’s supposed to be, your ear passes a signal to your brain that your body is on the move when it’s not. This eventually leads to a spinning sensation.

While most of these episodes don’t often last over a minute, you may experience other symptoms like nausea due to the sense of motion and even vomiting.

It’s essential to seek medical help if this vertigo impacts your hearing in any way or causes difficulties with coordination or speech.

As you can see, the sensation of your bed shaking can point at multiple possibilities that can be temporary or hint at an underlying psychological condition. If this sensation is recurring and progressing, you’ll need to consult a doctor and run a few tests to confirm the precise cause of your vertigo.

Currently, CT scans and computed tomography exist for such purposes. This involves using X-rays and computers to produce digital images inside your brain.

After you’ve gotten through this difficult first step, you can look forward to treatment plans since when it comes to these kinds of diseases, the sooner you find out, the better.