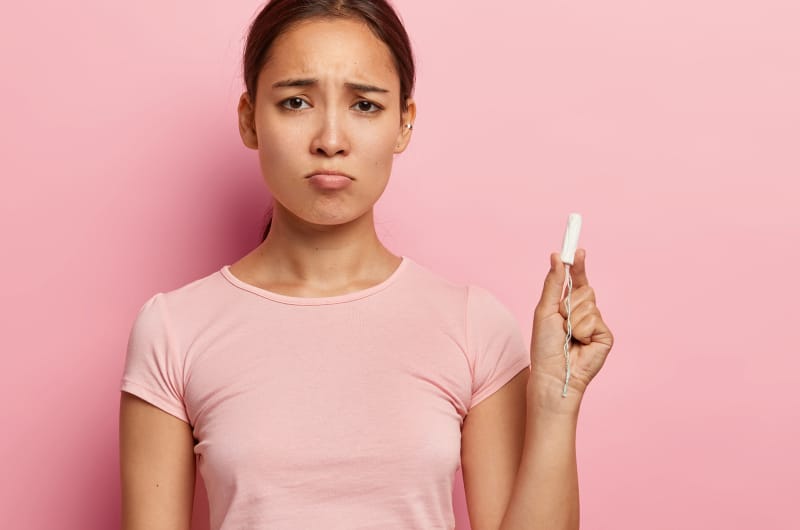 Basal body temperature is the average temperature in our bodies when at rest. It can be affected by many internal and external factors. For example, BBT in women can be affected by their menstrual cycle. In the period after ovulation, the BBT rises and only drops a short time before your periods begin. Your BBT may drop without periods due to an implantation dip, estrogen surge, or a substantial alteration in the external surrounding you.

Your BBT or basal body temperature is the temperature your body assumes when you are resting.

In most cases, our BBT can be affected by both factors inside our bodies and factors in our immediate environment.

Factors that can affect your BBT may include the amount of sleep you get, infections and diseases, hormonal medications, environmental temperatures, illnesses, stress levels, and hormone levels in the body.

The menstrual cycle involves changes in hormone levels, resulting in changes in BBT.

After ovulation, it may take up to 14 days to see your periods.

The progesterone levels dip directly preceding your periods a day before you get your periods. Therefore a dip in your BBT should precede your period.

Some clinicians may explain that the drop in BBT may not be exclusive to the decline in progesterone levels but can be released with the blood during periods.

There have been concerns where some ladies complain of a drop in BBT, yet their period fails to follow as shortly as it should or fails altogether.

Our article may discuss some of the factors that orchestrate such scenarios.

For example, you may be experiencing an implantation dip or a sudden release of the hormone estrogen, which can cause a drop in BBT without seeing your period.

Causes of BBT dropping without the period

If you have ever observed the BBT chart of any pregnant woman at the moment after conception, which follows around 14 days after ovulation, you will realize that at some point, there was an unexpected drop in BBT.

That may happen in around the eleventh day after ovulation.

So the only difference in implantation dip is; that the BBT goes down and then goes up again and continues to be so for the rest of the pregnancy.

The implantation dip may not necessarily mean that you are pregnant since it has been observed in BBT charts of people who are not pregnant.

Whether you are pregnant or not, the BBT goes up again until your periods or continuation of pregnancy.

So if your BBT has dropped and there is no period yet, it will go up again and drop later when your actual period comes around. So unless you are suspicious of pregnancy, you have no cause for alarm.

Estrogen surges may often happen twice, once before and after ovulation.

If an estrogen surge happens after ovulation, it may create a counterbalancing effect that may result in an unexpected drop in BBT.

Usually, the wave subsides, and before long, progesterone takes over, and the BBT may rise again.

The estrogen surge in most cases may coincide with the implantation dip or even cause.

An estrogen surge should not be considered a pregnancy symptom.

Hormonal family planning methods may also create an imbalance in progesterone and estrogen and eventually cause an estrogen surge which may, in turn, cause a drop in BBT.

Besides hormones, other factors in your immediate environment may cause a drop in your BBT.

For example, we had mentioned earlier that factors like temperature changes in our surroundings, stress levels, and consumption of alcohol, among others, may cause a drop in BBT.

A drop in environmental temperature, probably due to climatic conditions, could be causing the fall.

You may also have been resting and sleeping for a long time or any other factor. But that drop does not mean your period should come before its time.

Therefore, you don’t need to be alarmed since such factors don’t substantially affect the menstrual cycle.

On the contrary, to ensure you are not seeing any abnormal factors, you can institute a routine to ensure that the said factors don’t get altered.

For example, you can wear heavy or light regarding temperature, follow strict sleeping hours and avoid alcohol, among other possible methods.

What will BBT be if pregnant?

After ovulation, you may expect a drop in BBT at around the eleventh day if conception occurs.

However, the drop reverses later, and BBT goes up high again and may remain that way since it only drops to allow for you to receive your periods.

Now that you are pregnant and not due to periods, your BBT may remain high.

Can BBT drop and still be pregnant?

A one-day drop known as implantation dip may be expected even though it may not drop later; other external or internal factors may affect it.

Using a BBT chart may be a recent way of making family planning and parental or even sexual decisions, but that does not mean it is far from controversial.

For example, a drop in your BBT may show pregnancy, but you have to do a pregnancy test to be sure.

In much as you like monitoring your BBT, we should make some decisions and conclusions based on actual testing and diagnosis.

Countless factors may cause changes in our BBT, not forgetting that our bodies may react differently to different elements within or without.