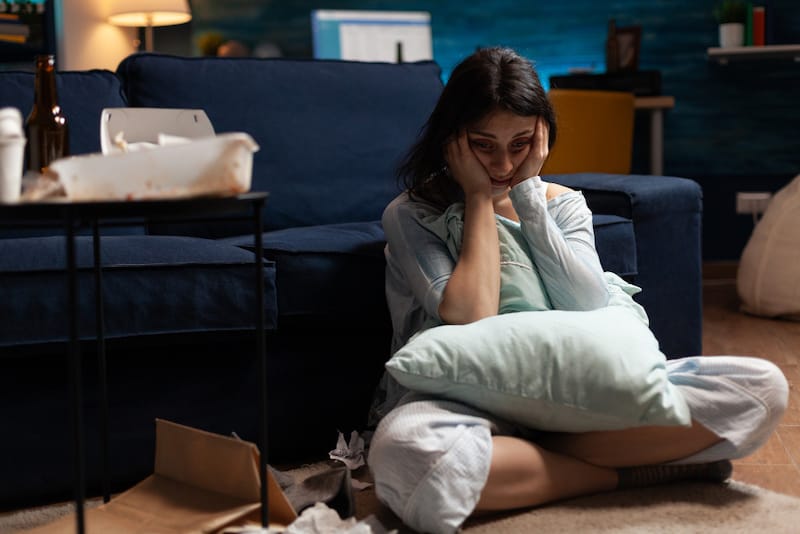 Weed can provide short-term relief from your anxiety if you’re doing it right, or it can cause anxiety and panic if you don’t know your weed compounds. You could also face anxiety symptoms if your environment isn’t relaxing, and that could trigger the symptoms. Be careful to note the appropriate dosage of the THC and CBD compounds in the weed. If you’re facing anxiety as a withdrawal symptom, it should go away in a few days or weeks. But it could be worse if you suddenly went cold turkey from taking it every day. In such a case, you should gradually decrease your weed intake not to feel the overwhelming symptoms. If you have severe anxiety issues, try not to self-medicate, as it can lead to substance abuse. Instead, seek professional help with medication and lifestyle changes for a long-term solution.

Anxiety and weed have a complicated relationship. For someone with anxiety taking weed can help manage the symptoms but also make the symptoms worse or even cause anxiety in the first place.

Smoking weed does benefit in various ways as a person might feel an increased sense of calm and relaxation and even get better sleep. But it could also be a false sense of reality while it’s actually creating anxiety.

So is weed good or bad for your anxiety? Does weed help manage anxiety, or is it responsible for it? Will your anxiety ever go away? Let’s take a look.

How does weed cause anxiety?

A 2017 survey done on 9,000 Americans found that 81% believed that weed has a lot of benefits, including working in favor of their mental health issues such as anxiety and depression and maybe even for medical conditions.

While weed might work to cope with general and social anxiety, it’s not a foolproof solution. It might have adverse effects on others, and they might experience their symptoms getting worse.

High levels of the THC compound are responsible for increased anxiety symptoms, such as an increased heart rate, racing thoughts, and difficulty breathing.

Weed might appear to give a false sense of relaxation and calm, mostly temporary, but it doesn’t help in the long run and can worsen symptoms with more prolonged use.

Anxiety issues after taking weed are common in people who use it to self-medicate already present symptoms of anxiety, use it in large quantities, or are inexperienced with its use.

Weed might not be a suitable form of self-medication for anxiety, and it might even cause a panic attack.

If you wish to control your anxiety symptoms induced by taking too much weed, make sure there’s an equal ratio of THC and CBD in your weed, as too much THC can make your anxiety severe.

Quitting weed can cause anxiety and depression symptoms. It entirely depends on how much weed you used to intake, and symptoms also differ from person to person.

Weed affects our brain in more ways than you realize.

What you feel is the calm that comes from intaking it, but it affects the brain’s uptake of serotonin and dopamine, responsible for your happiness and pleasure.

When you keep smoking weed, you’re getting a dose of serotonin and dopamine, but as you stop, the system comes crashing down, which was dependent on weed to make them.

The withdrawal symptoms then appear, such as anxiety.

How to handle anxiety from weed?

There’re a few ways to make your weed experience less anxious and avoid the anxiety levels from rising that you don’t wish to experience again.

It would help if you were in a relaxing environment whenever you’re intaking weed because sometimes whatever’s going around us or even in our minds can make things go in a weird direction rather than calming it down.

Whatever feels calming to you can be your go-to whenever smoking weed. Listening to peaceful music, chilling with your pet, watching nature videos, going to a park, or watching a funny TV show are some ways to relax.

Taking a warm bath and doing deep breathing exercises can help you calm down.

If you’re feeling anxiety from weed, there are specific ways to calm down, like sniffing pepper and making lemonade.

How to avoid anxiety from weed?

Dealing with anxiety from weed withdrawal

If you used to smoke weed regularly, reducing the quantity over time is better than suddenly stopping the intake. If you’re someone who used to smoke it occasionally, it will be much easier to stop it altogether.

The first two to three days can be pretty challenging to deal with, but the withdrawal symptoms depend on how long you have been smoking weed and its quantity.

Similar anxiety symptoms can occur if you vape.

The most important thing is to notice if you need professional help dealing with the withdrawal from weed.

It could be way harder than you expected and if you feel like going back to smoking again, then seeking guidance and medical assistance is the only way to protect your mental health.

What are the symptoms of weed withdrawal?

Anxiety is only one of the common withdrawal symptoms, and not everyone might feel similar symptoms.

The symptoms of withdrawal include:

What are the symptoms of anxiety?

If you have not been diagnosed with anxiety, then here are some of the symptoms which can help you determine if it’s anxiety:

There could also be some physical symptoms of anxiety, such as:

Will my anxiety ever go away?

Anxiety is a mental health issue that needs time and effort to be treated. While it might never completely go away, you can reduce the occurrence of anxiety attacks and limit their frequency.

Becoming aware of your trigger, maintaining a journal, taking medication, and practicing a healthy lifestyle like healthy eating and exercising can help treat anxiety.

How long does anxiety last after quitting weed?

When you’re used to taking weed and decide to quit cold turkey, withdrawal symptoms are stronger than ever, making you feel you’ll never get over this terrible phase.

But after quitting, the brain tries to return to normal, making you sensitive to many things around you, including anxiety and depression.

The effects should last for a few days to a few months, and until that time, the brain is returning to normal production of the neurotransmitters.

If you still feel symptoms of mental health issues, it’s best to seek professional help. The way to quit weed is to decrease the quantity gradually, but the effects can feel overwhelming if you suddenly stop.

How can I take weed to reduce anxiety?

There should be a proper balance between CBD and THC compounds if you want to fight anxiety with weed. Terpenes in weed have anti-anxiety properties.

If you’re feeling down, look for limonene, which can create euphoria and give you an energy boost. It interacts with serotonin and dopamine receptors and helps stimulate euphoria.

If you’re looking for something to chill you out and calm down your anxious thoughts, then go for linalool, a compound of lavender that has a more soothing, relaxing effect.

If you’re looking for something with mild effects, then go for beta-caryophyllene, which has good anti-anxiety properties.

If smoking weed elevates your already present anxiety symptoms or causes it in the first place, you might not be taking the correct quantity.

You’ve to be careful of the weed’s THC and CBD compounds and ensure they’re in the right quantities to help you calm down or feel elevated. You could face various mental health issues and symptoms when you don’t know what’s going into your weed.

If you’re experiencing anxiety as a withdrawal symptom, see if it’s better to decrease the quantity slowly instead of going cold turkey. If you’re still facing overwhelming withdrawals, then seek professional help.